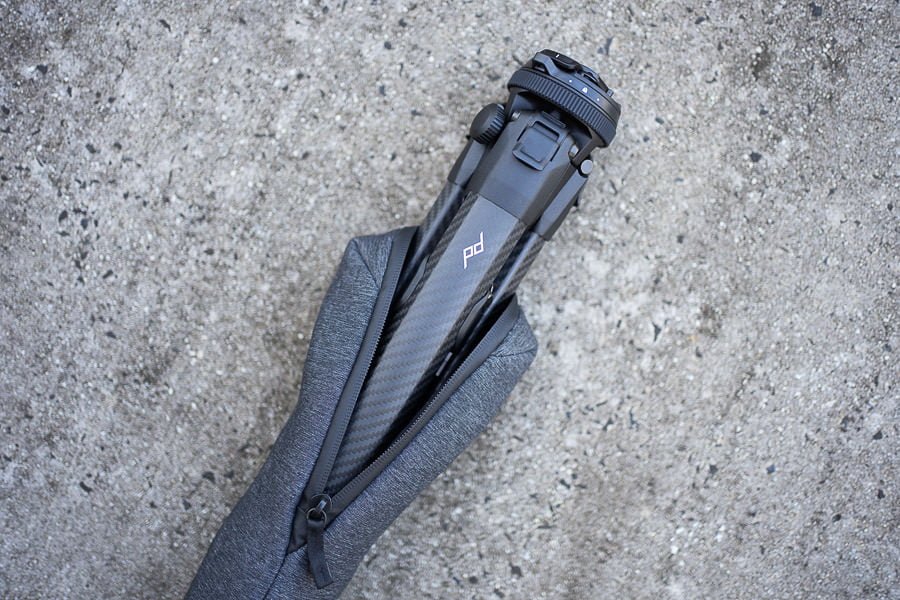 Last year, I commissioned our resident tripod expert to write a review on the soon-to-be-released Peak Design Tripod.

When it comes to our 3-legged friends, Matt Saville certainly knows his stuff, and put together this stellar review for Shotkit.

Matt remained 100% impartial throughout the review, but I still felt that the tripod warranted some more nit-picking – after all, it needed to justify that premium price tag!

Since the initial review, Peak Design has modified the design ever so slightly, so I thought it was about time to take another look.

I’ve been using the final production version of the carbon fiber Peak Design Travel Tripod, and while I agree with Matt that it is a great product, there are definitely some areas in need of improvement.

4 Things I Dislike about the Peak Design Tripod 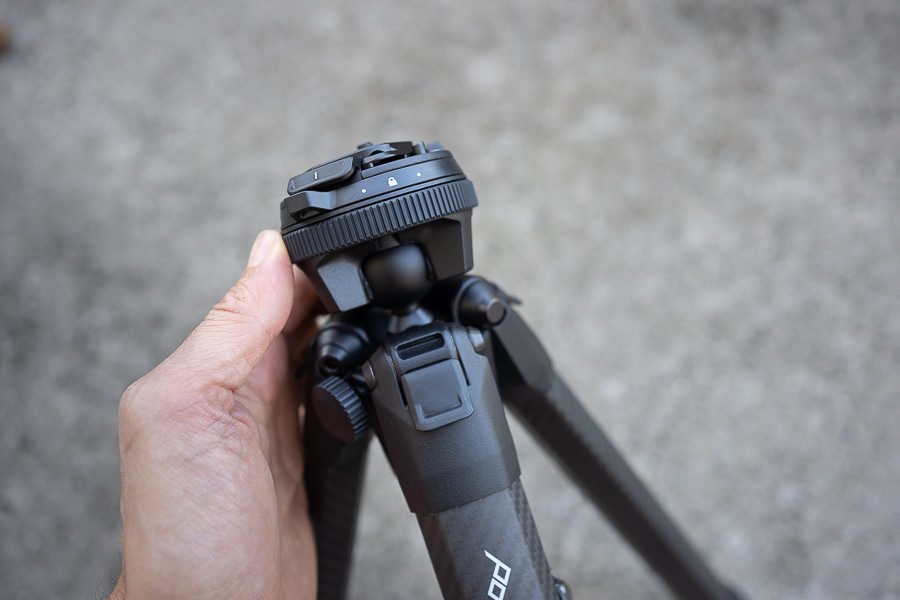 You can’t rotate the ball head when it’s sitting in its ‘resting’ place.

This is an annoyance that I’ve seen discussed in various forums, but the long and short of it is this – you can’t rotate the ball head of the tripod without first extending the centre column.

When the ball head ‘sits’ in the cradle on top of the tripods’ legs, it’s ‘nested’ in between the top of each of the 3 legs.

In order to rotate it even slightly, you need to unfasten the centre column tightening dial, then pull the column up far enough to allow the ball head to rotate, then re-fasten the dial to secure the column in place.

Any serious tripod-user knows that the centre column is the weakest point of a tripod, especially when it comes to stability.

Extending the centre column undermines any stability that the 3 legs provide, so this design choice seems a little unfortunate.

To be fair, you only have to extend the column an inch or so to provide the ball head with adequate room to rotate, but it’s still a movement I’d prefer not to do at all.

After all, virtually every other camera tripod allows you to freely rotate the head without extending the centre column.

Another small complaint about the ball head design is that it doesn’t allow for panning, although not every photographer requires this functionality from their tripod. 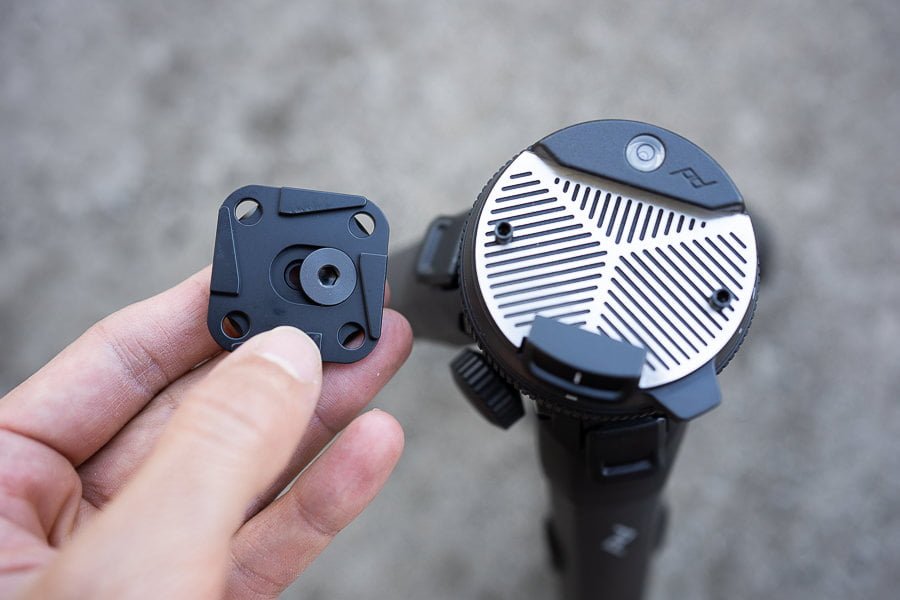 Yes it’s compact and lightweight, but it also requires a separate tool to attach it to your camera.

This is a pet-peeve of mine, and I was disappointed to find that the design gurus at Peak Design chose to use a hex fastening bolt rather than a ‘twistable’ bolt to secure the tripod plate to your camera.

Anyone who’s ever cursed themselves for forgetting to bring a hex wrench or allen key to secure their camera to their tripod will appreciate this annoyance. 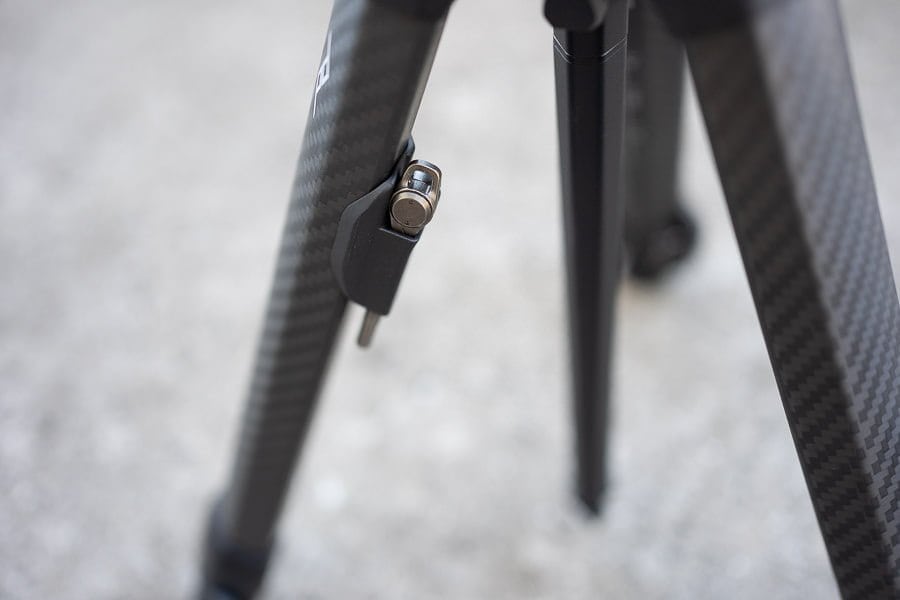 Yes the folding hex wrench is cute, but it should be redundant.

Peak Design include a rather nifty folding hex wrench which clips stylishly to one of the tripod legs… but what about when you inevitably lose it?!

Without a hex wrench, the entire Peak Design Tripod would be rendered useless.

I wish Peak chose to use one of those (finger) twisting locking nuts you see on so many other tripods, so that you could tighten the base plate to your camera without the need of any separate tool.

Now you see it, now you don’t!

Whoever decided to put the bubble level on the top of the ball head, obviously hadn’t had enough coffees that morning…

As soon as you attach a camera to the tripod, guess what? No more bubble level!

You could argue that the bubble level should be used before you attach your camera, but I don’t buy that.

Photographers need to be able to make constant tiny adjustments to perfect a composition, and having a bubble level that’s hidden by your camera just makes no sense.

Let’s not beat around the bush here – this thing is pricey!!

At just shy of $350 for aluminium and a whopping $599.95 for carbon fiber (see latest prices here), this puts the Peak Design Tripod out of reach for most beginner photographers, or those with smaller budgets.

The truth is this: there are plenty of cheaper tripods available here in 2020 that do just as good a job of stabilizing your camera as the Peak Design tripod.

However, if you’re comparing this product to a cheaper alternative, you’re kinda missing the point…

Let’s have a look at the things I love about the Peak Design Tripod, and why I think it still deserves its inflated price tag.

5 Things I love about the Peak Design Tripod 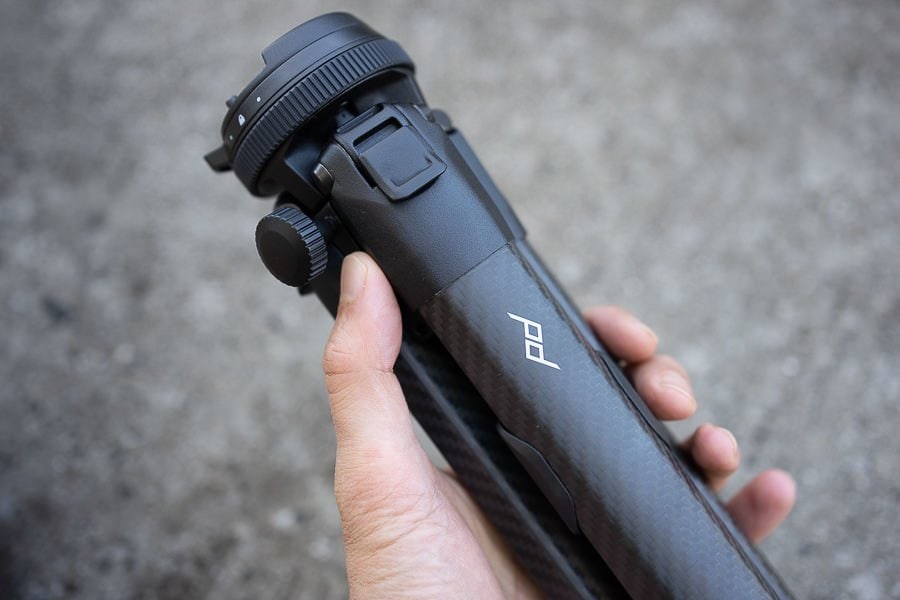 It’s smooth and rounded and begs to be picked up.

Did I just use the word ‘gorgeous’ to describe an inanimate object with three legs?!

If you know Peak Design, you know they’re all about good looks. Sure, their products are all super functional and well-designed for the user, but they’re also pretty damn nice to look at.

The Peak Design Tripod looks and feels like no other tripod on the market. It’s like an iPod among Walkmans, disrupting the tripod industry as something with good-looks worthy of a space on your book shelf.

With its contoured legs that pack down to the diameter of a water bottle, it yearns to be picked up and fondled.

If you can afford the carbon fiber model, you should get it even if it makes no financial sense – it simply looks and feels amazing. 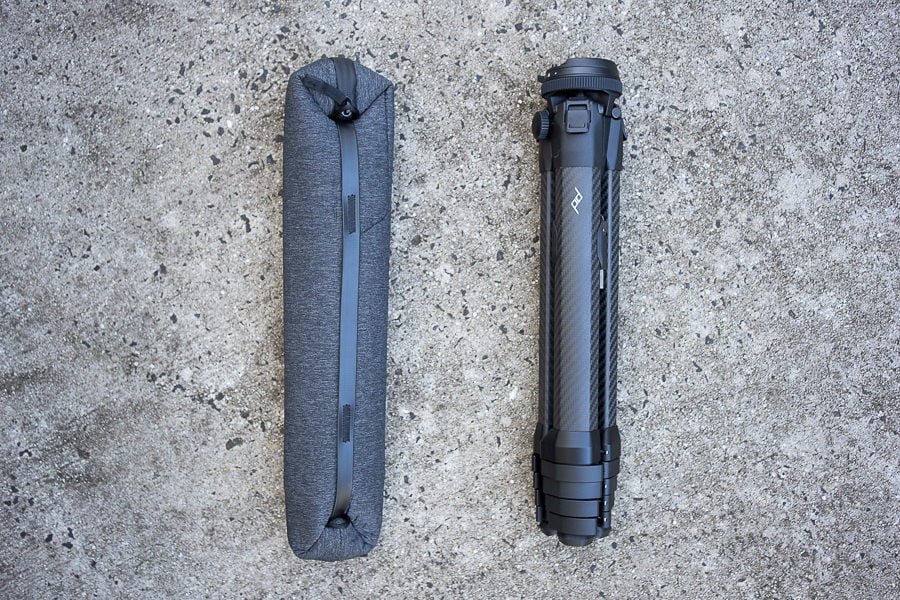 Even the bag looks nice!

I know ‘looks and feels’ shouldn’t normally come into the equation when shopping for a tripod, but why do you think people buy Leicas?

Do Leicas really produce better images than Nikons or Canons to justify their elevated price tags? I think not, and that’s why there’s so much polarizing opinion about the Peak Design Tripod. You either want one or you don’t.

This is a tripod I want on display in my office. It’s such an elegant design that I don’t want to hide it, even with the svelte carrying case that fits like a glove.

For me, this is reason enough to buy the Peak Design Tripod. Go ahead and ridicule me… but at least I don’t own a Leica! 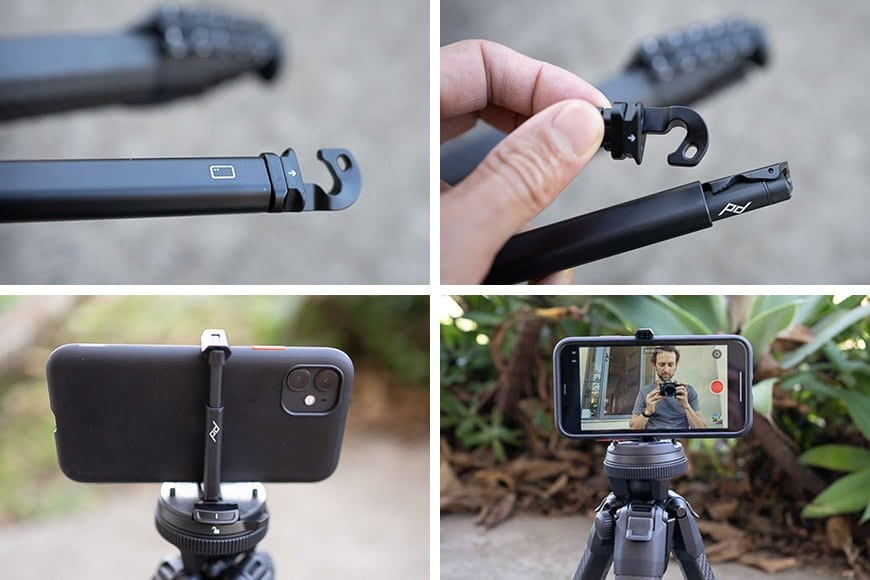 Attach your smart phone to a tripod has never been so fun!

The integration of a smart phone holder in the centre column of this tripod was a stroke of genius.

I imagine other tripod designers slapping their foreheads in a “why didn’t we think of that?!” moment.

Attaching a smart phone to an expensive tripod may seem a little juvenile, but trust me – when you have the option to do so in such a convenient and fun way, you’ll find yourself using your smart phone for selfies all the time!

We tend to forget just how good the cameras are on our fancy smart phones, so it’s nice to put them to use with a stabilized shot that includes us in the landscape. 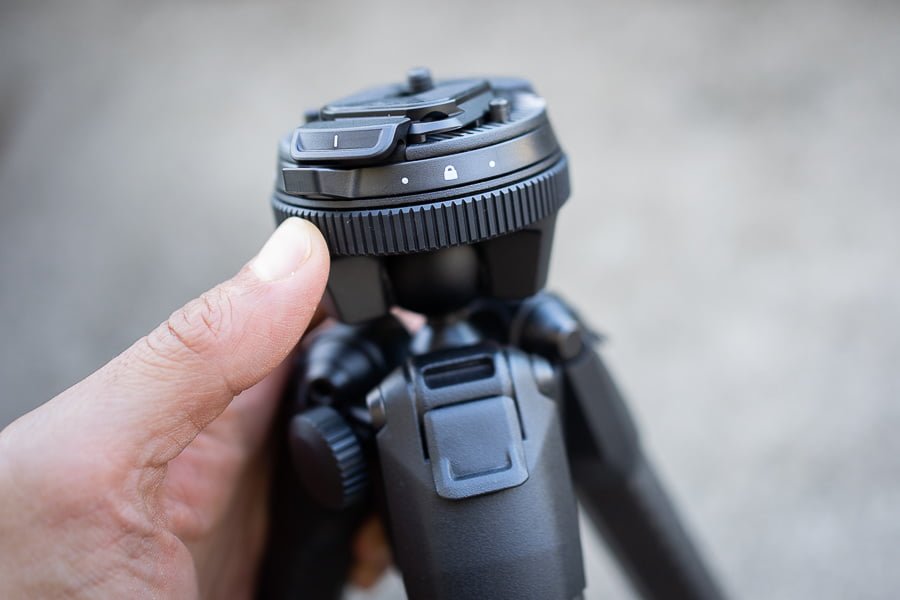 Rotating a dial is such an intuitive and tactile way to loosen and position your camera.

Well it’s a love/hate relationship, actually. The fact that you need to extend the centre column before using the ball head sure is annoying, but once you’ve got over that, it’s happy days.

The ball head is super-smooth and omni-directional, allowing you to get any creative angle you want, and secure it in place in seconds.

It’s really no quicker than using a traditional tightening knob or a pistol grip featured on traditional tripods, but the whole ‘twisting’ set up is intuitive, fun and downright addictive. 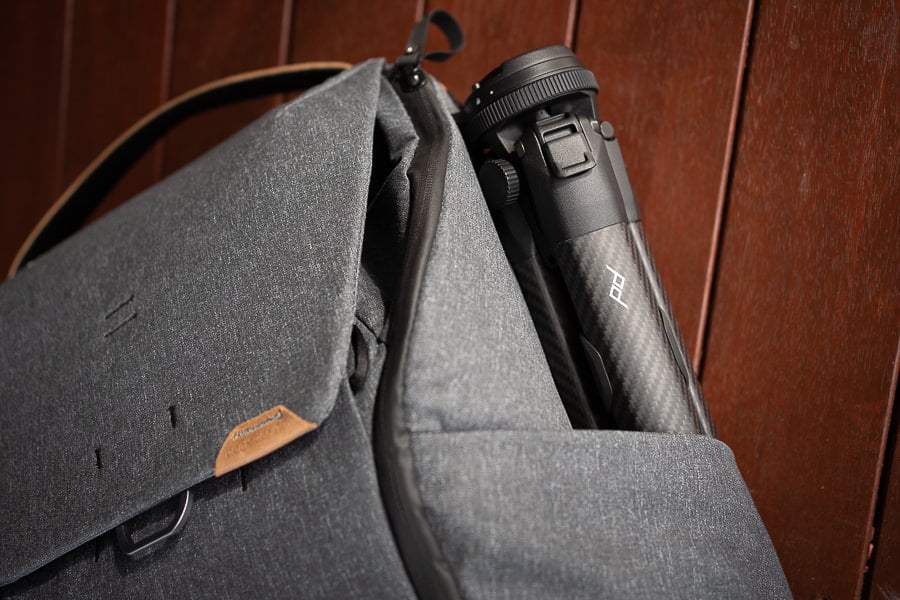 Fits perfectly into the side-pocket of the Peak Design Everyday Backpack.

For all that it lacks in the weight department, the Peak Design Tripod makes up for with its unique, ground-breaking spatially efficient design.

There’s admittedly not a huge difference between a similarly-sized traditional tripod and Peak Design’s offering, but the key here is its overall diameter – the lack of protruding knobs means that you can slide the tripod in to your backpack’s water bottle holder.

It also means that the included weather proof case is also super slim. Thankfully they’ve improved on the design from the first iteration, making it much easier to get the tripod in and out.

A key feature on the Peak Design Tripod is the speed at which you can extend the legs.

The flip locks are made entirely of metal for increased durability – a feature you’ll rarely find on other tripods – and open and close smoothly, without any ‘snapping’ in the motion.

It’s immensely satisfying to grab hold of all four flip locks at once with one hand, open them, then watch the leg sections fall into place – there’s no need for any shaking to encourage the movement. Everything has been precisely engineered. 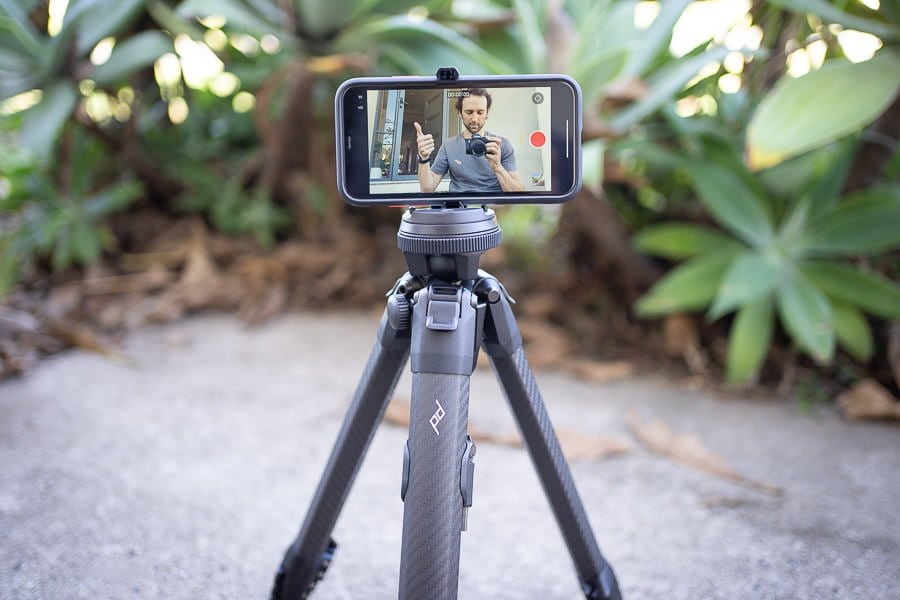 For all its shortcomings, it does still get a lot of things right.

I think if you’ve read this far, the answer is probably obvious.

Don’t worry – you don’t need to justify it to anyone. Like I said before, you either want a Peak Design Tripod, or you don’t.

Even if every ounce of your senses are telling you it’s not worth the money, you can still want it!

For me, it’s just one of those products I’m prepared to pay for, despite all its shortcomings.

When you’ve been a photographer for so long, you realise that unless your gear brings you a smile when you pick it up, you’re less likely to press that shutter button.

For all its flaws, the Peak Design Tripod is still an iconic product. It’s an object of lust for any photographer, and so much more than something to hold your camera steady. 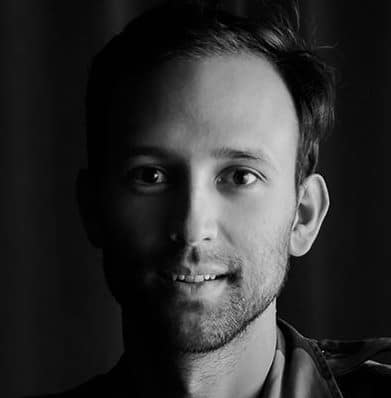