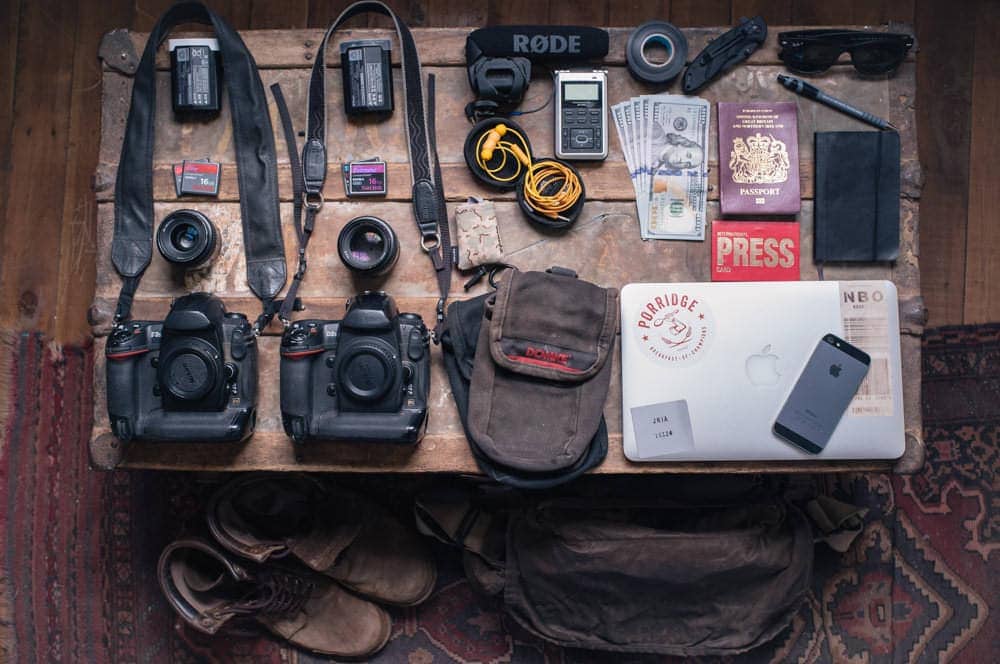 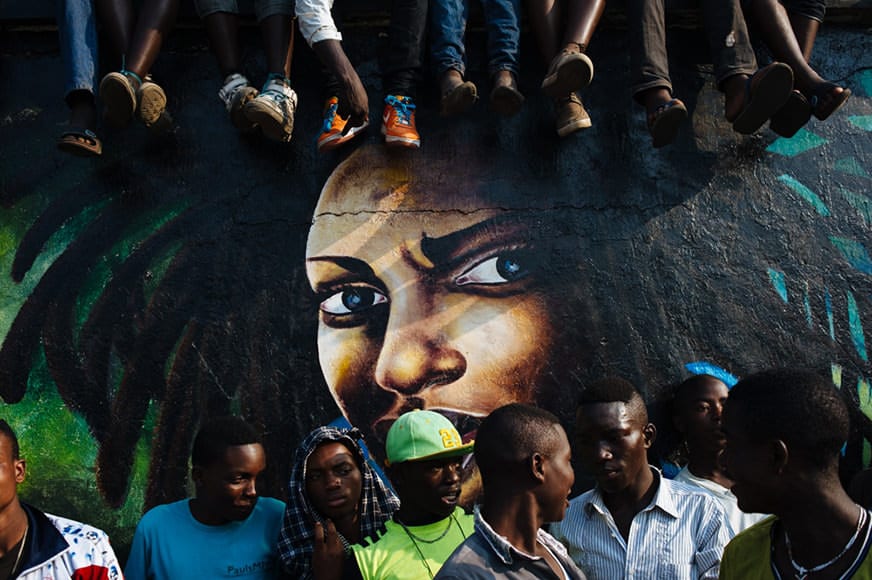 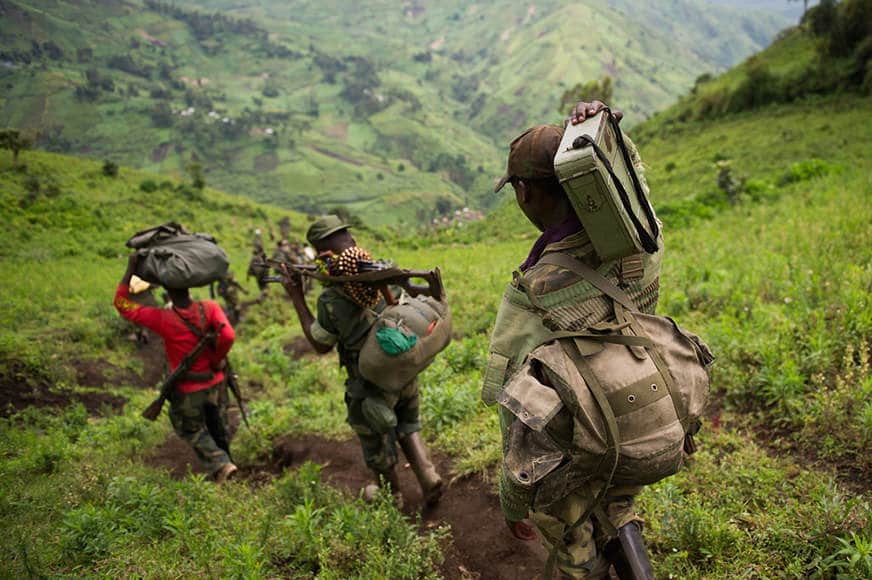 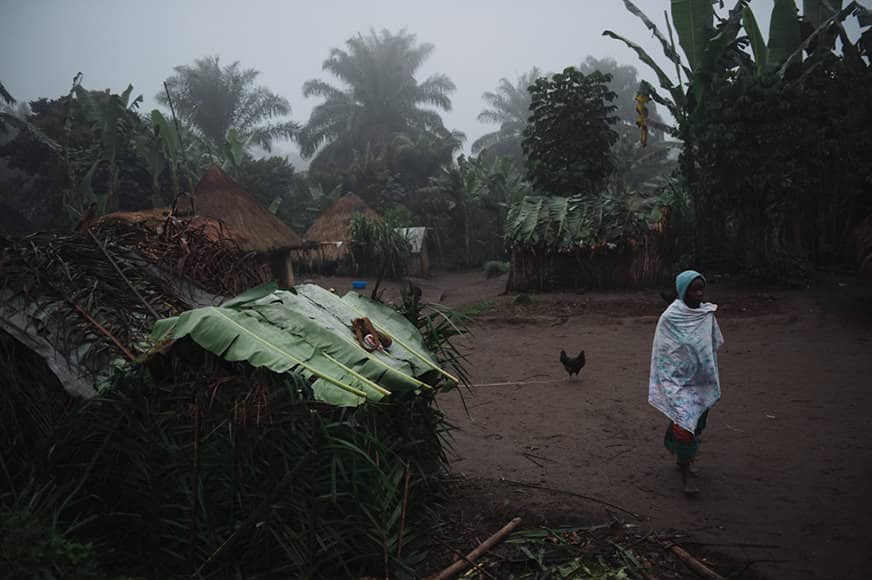 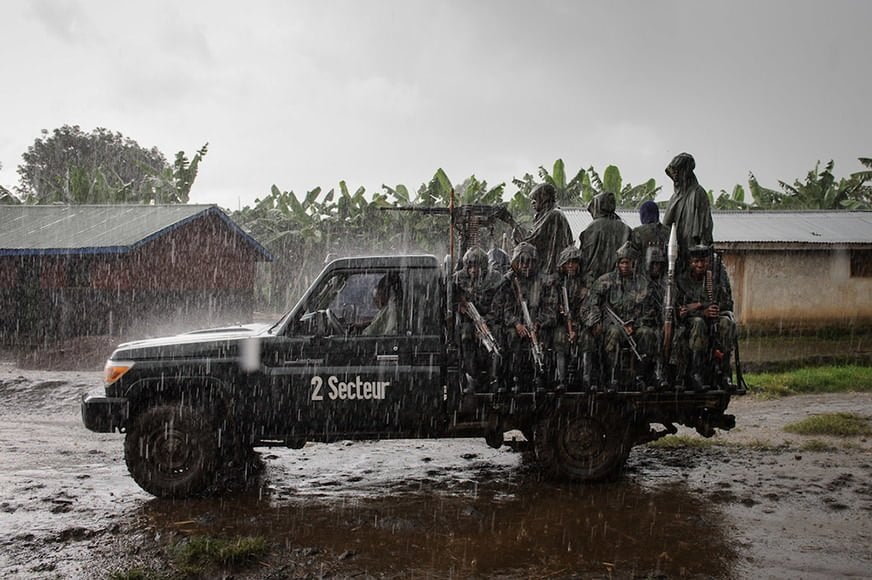 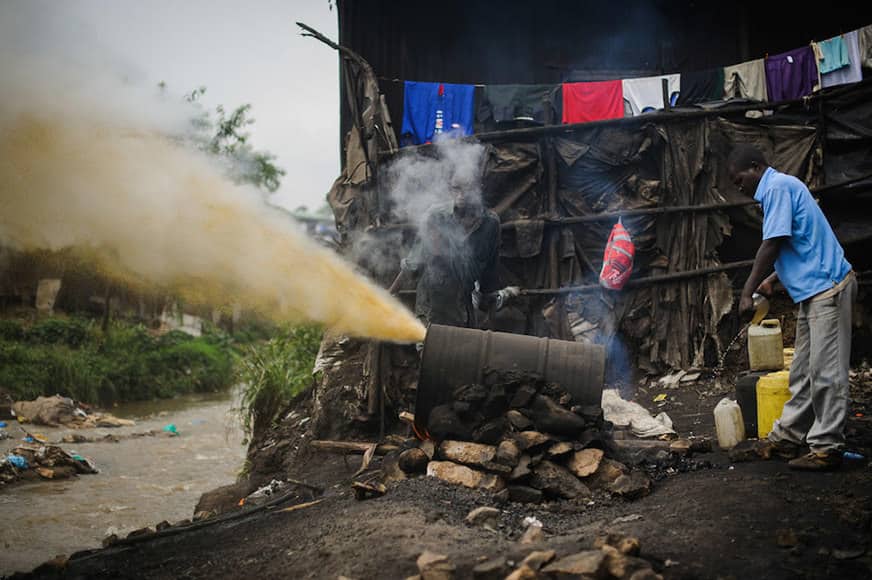 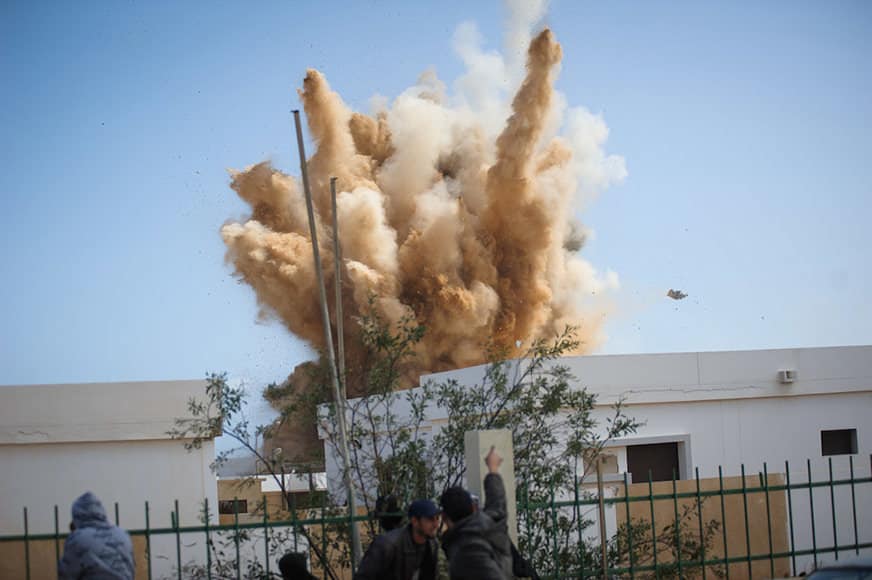 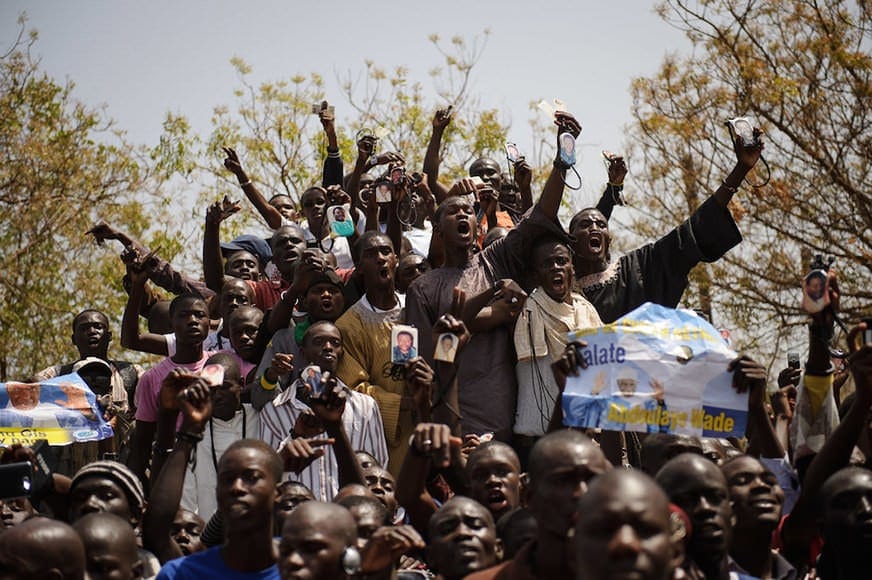 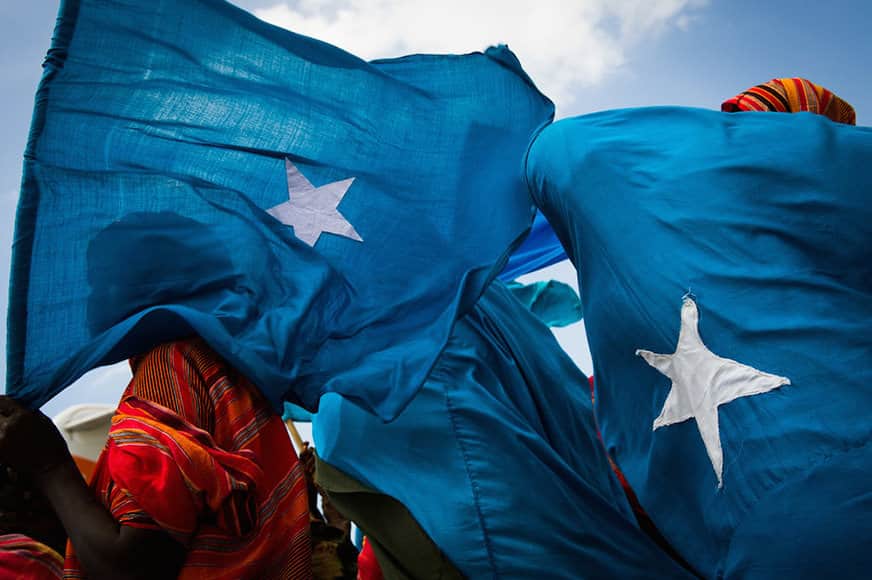 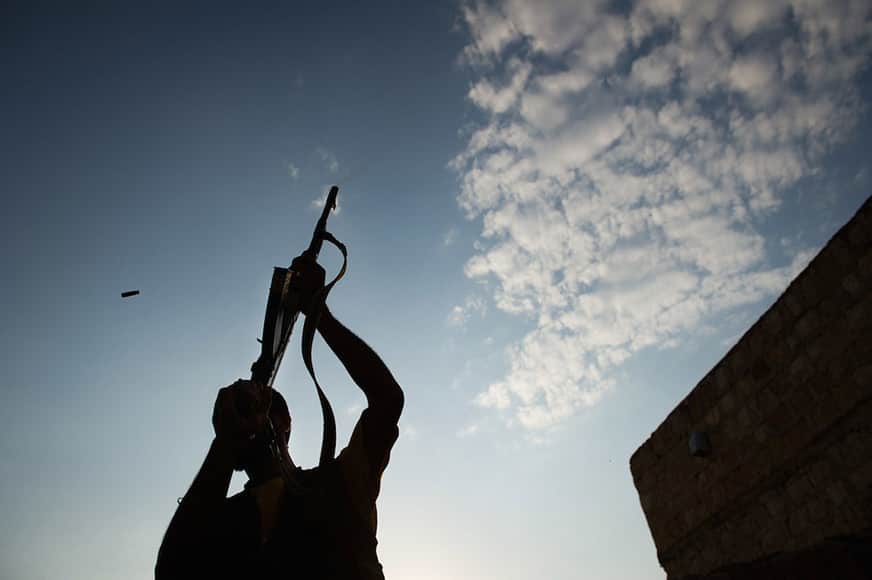 I live in Nairobi, Kenya, but work predominantly elsewhere in the East Africa region; often the less pleasant parts of it, telling stories of conflict, injustice, and the humanitarian crises that are born of this. The vast majority of my work is for international news clients, either on breaking news stories, or longer, editorial features.

This — with minor exceptions — is the necessary gear I keep with me in my hand-luggage when flying out, the things I need to work. (Chargers and card-reader are omitted, and the knife goes in checked baggage.) I learned the hard way in November 2011 never to leave chargers in the hold of an aircraft. When flying out to the Democratic Republic of the Congo to cover the presidential elections my checked-baggage went missing, and along with it my laptop charger. The internet in my hotel was terrible, and it was a race against the dying battery to transmit my images to a wire agency. My bag turned up a day later.

I generally work with two Nikon D3S bodies, one fitted with a Nikon 35mm ƒ/2 lens, the other with a Nikon 50mm ƒ/1.4. They’re both dented, scratched, and full of dirt; but fast, and keep on going. In addition to this, I travel with a Fujifilm X100 (35mm ƒ2, and used to take this image) — it’s small, light, unobtrusive, and is a back-up in case my main gear is stolen.!

I also own Nikon 24-70mm ƒ/2.8 and a Nikon 70-200mm ƒ/2.8 lenses, but I rarely use them. I can’t remember the last time I used the tele, and the 24-70mm I only use if I have to work with one body. I don’t like shooting wider than 35mm as it tends to distort people at the edge of the frame, and zoom makes me lazy – I prefer to use my feet to frame the shot, rather than staying planted in one place and zooming to fit.

This year, I’ve been venturing more into multi-media production as a means of story-telling, recording ambient sounds and interviews with a Roland R-05 audio recorder, and mixing small sections of video with the addition of the Rode VideoMic Pro sitting on the hot-shoe of one of my bodies. I find that giving a voice to those depicted means that they can tell their own story, rather than my interpretation of it. (An example of this was documenting the plight of the Muslim population remaining in Bangui, the capital of Central African Republic, last February.)

I read somewhere that recording audio without headphones is like taking a photograph without using a view-finder, and so a pair of small, ear-buds are always in with the voice-recorder. They also have the advantage of providing a welcome distraction—coupled with the music on my iPhone —during the long hours of bumpy roads, driving to remote parts of the continent.

Many of the places I work do not have ATMs and hotels don’t take credit cards, so it is necessary to travel with a wedge of cash—U.S. dollars are often preferred—in order to pay for everything: hotels, food, cars, translators, etc.

I keep my passport with me as I never know when I may end up crossing a border. Working in the east of D. R. Congo covering the M23 rebellion, I was with some colleagues in a small town that sits on the border with Uganda, Bunagana, as battles raged for control of it. Bunagana was several hours drive from the nearest Congolese guest-house that hadn’t closed down due to the conflict, and so we ended up crossing into Uganda every night to find a place to file our images and get a few hours sleep.

I use Moleskine notepads to record names of people, quotes, contacts, and snippets of information and observations, as well as ideas for future stories. They’re tough, fit in one hand, and have a handy pocket in the back for keeping business cards and random pieces of information doled out on scraps of paper. And I remember a respected print journalist once telling me that the best pen for a journalist to use is one you can operate with one hand: no lid, and click to write. I’m rather particular about them, and always have a stash of Papermate FlexGrip Ultra pens with me. They’re smooth, cheap, never give up, and there is no lid to lose.

To save my back a little when trudging through airports, the Apple Macbook Air is very light, and having solid-state storage means that it can be bashed around without too much risk of losing data. I often have to file pictures from the field and so keep it with me whenever I can.

The iPhone is a multi-purpose piece of kit. I have my e-mails with me (when there is cell coverage), which is invaluable as a freelancer. It also doubles as a modem to transmit files from my computer (again, depending on 3G coverage). I use the camera, too, often via Hipstamatic or the VSCO app, posting to Instagram a different side of stories to the ones I’m shooting with my main cameras.

Finally, a sturdy pair of boots (leather doesn’t smell!) and a Domke shoulder bag to transport it all around. I rarely work with the bag on my back. I usually keep my cameras slung over my shoulders, and notepads, wallet, passport etc. stashed in Domke pouches. Electrical tape comes in handy for bodging things back together, as well as taping “Press” onto cars in a conflict zone!