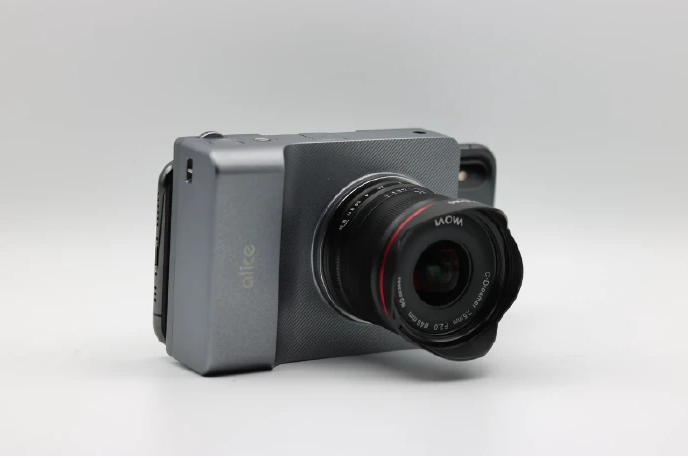 Cell phone cameras shouldn’t be discredited for the sheer photographic quality they’ve developed over recent years. There are even international competitions devoted to cell phone shots and some of the submissions are downright impressive.

Nonetheless, for many photographers, there’s just something a bit off about going on a photo expedition with nothing more than a phone for capturing those decisive moments.

The Alice Camera tries to create a compromise between these two photographic worlds and it finally might just succeed. The compact phone-attachable shooting device delivers a unique functionality that meshes phone technology with all the composition trimmings of a full-blown Micro Four Thirds camera.

Alice neatly attaches to the back of a smartphone while offering the grip heft, professional optics, physical sensor size and interchangeable lens system offered by a complete camera. This clever idea was first announced in September of 2020 and then launched as an IndieGoGo campaign in February 2021. It subsequently raised a respectable $167,314 dollars and its developers anticipated an October 2021 launch date.

Obviously that hasn’t happened, and since that initial optimistic launch date claims, the camera has gone through many delays right up to now. Despite these setbacks, the company behind Alice didn’t publicly acknowledge specific reasons for the delays for a long time.

In fact, it was only recently, after backer push-back for details, that the camera’s developers delivered a new release timeline, which they shared as a Google Docs image.

Aside from the shared timeline, multiple backers on the Alice Camera IndieGoGo comments section who wanted to know when they’d get their product also received a seemingly automated form response from Alice Camera stating,

“Thanks for your comment. We just sent you an email with the most updated information”

This was four months ago and the development details in the uploaded timeline indicated that the recent global chip shortage was partly to blame for delaying the release of Alice. More recently, however, this changed again and Vishal Kumar, the Co-founder and CEO of Alice Camera explained to the website PetaPixel that,

“When we pitched Alice Camera v1 on Indiegogo in Feb/March 2021, one of the core electronics components for image/video processing was an FPGA chip. But this chip alongside the CPU and Wi-Fi modules we sourced were massively affected by the chip shortage, and delivery times went from six weeks to 60 weeks around May 2021. Obviously this was not feasible, so around July/August 2021 we instead decided to consolidate our stack around a Qualcomm Snapdragon chip,”

Kumar also elaborated that switching to the Snapdragon chipset was a major improvement for how the camera is built and what it will be capable of once it’s released. He stated, “This single Snapdragon chip has replaced five components from the original design, quite remarkably simplifying our supply chain during this horrid chip shortage. The Snapdragon ecosystem also allows us to much easily leverage our custom Linux-based Alice Camera Operating System software,”

After a fair bit more explanation for the delays and changes in the camera’s development, Kumar made assurances that all the components for Alice are finally ready and that the camera is now in its final stages of regulatory testing for consumer production. He also claims that production units really, finally will start shipping in October of this year.

Some of the above details seem a bit suspicious in how they shift blame around to different external causes, but recent developments seem to be bearing out the company’s newest claim of an October release date.

The most important among these is a recent pop-up store opening in London at BOXPARK in Shoreditch in which the camera made a real-life appearance for customers who attended. They were even able to use the little device to grab some shots with it.

According to Kumar, the reception by users was “great”, since many people had never before seen a product like this on the market.

And indeed, the premise of Alice does sound very enticing for any street photographer who wants serious photographic quality, depth of field, pro optics and other camera characteristics in something so wonderfully compact that it can even latch onto a phone.

As things stand, it does really seem that Alice will finally meet the streets in customers’ hands as promised (again) in October. We’ll see. Meanwhile, the idea behind the device really is worth hoping for.

Alice Camera also released a demo video that shows off the camera’s chops in its pre-production version. Here it is.