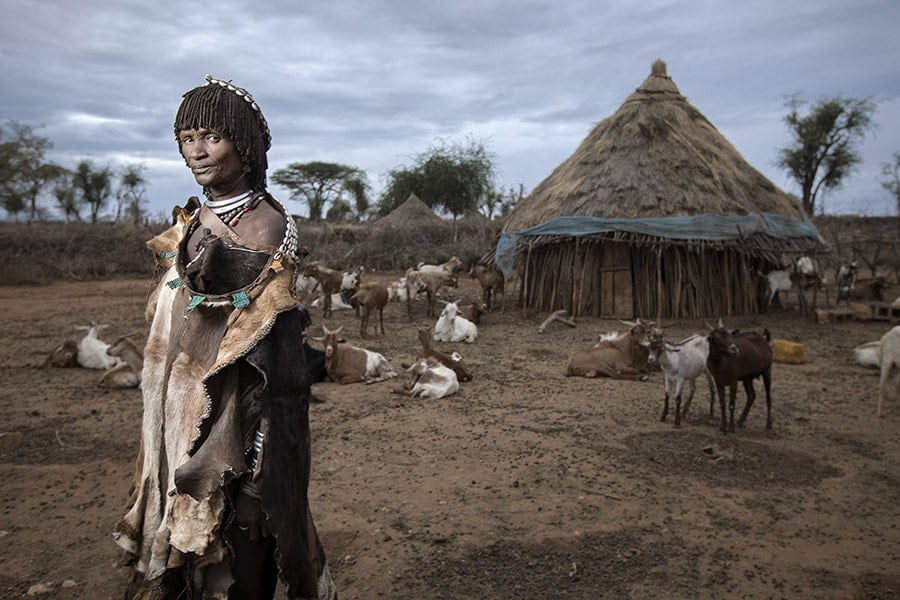 This is a guest post about photographing African tribes by travel photographer Ben McRae.

I never knew I was interested in tribal life, and I never set out to photograph it. It really just happened. Funny enough, it was in the pursuit of beer that I got my first glimpse into traditional life.

I have family in South Africa. They, like most South Africans, like to load up the 4×4 and drive. I booked a holiday with them in the hope of surfing South Africa’s famous point breaks… but they had other ideas.

My Aunty wanted to show me Africa.

When you’re on the road, one of the most important questions is this: What happens when the beer runs out?

You go to the shops, of course, but what if you’re on the road in the Transkei, surrounded by traditional Xhosa rondavels?

You look for a flag. Each flag has a different meaning: some have fresh bread, some have meat, and others have cold beer.

When I was asked to go get some beer from a traditional hut I almost told my uncle to get stuffed… but he wasn’t joking.

I ventured in, puzzled, a little scared, and very hesitant. 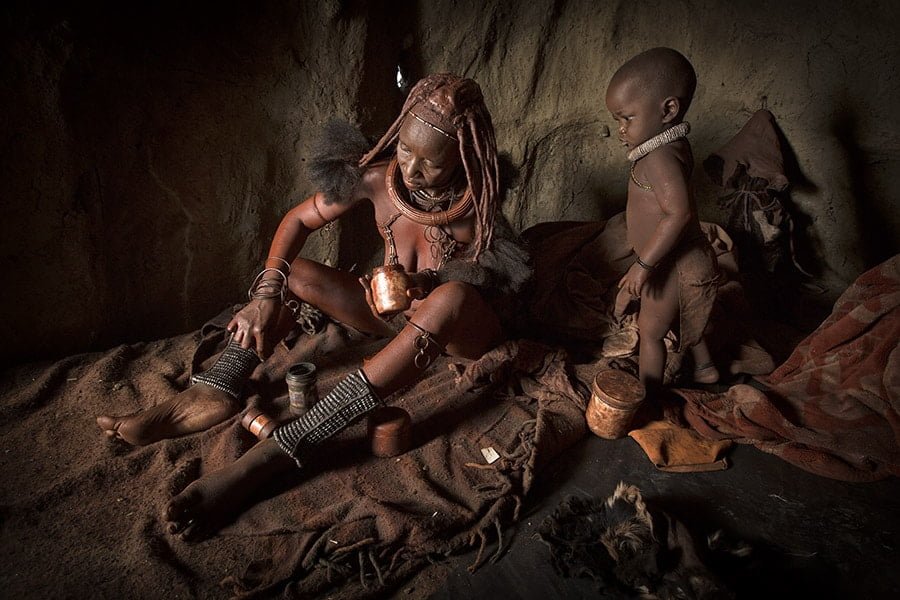 Inside, there was a woman her face painted in a traditional white Xhosa mask. She breastfed a baby as the men sat outside lapping up the sun.

Their house was traditional, to say the least. I hadn’t expected it, nor the ice cold beers she produced from a back room.

I was a little rattled at the experience, as I realised that not all people live like me.

Something changed, and I became increasingly interested in the cultures that surrounded me. I realised that even between South Africa and Australia, there were huge differences.

My eyes had been opened. I saw how many cultures coexisted in South Africa. Lines were blurred, customs were sometimes lost.

On the flight home I got to thinking. What about the cultures, lifestyles and the people still out there? The ones that are yet to be fully swept up by western conveniences? 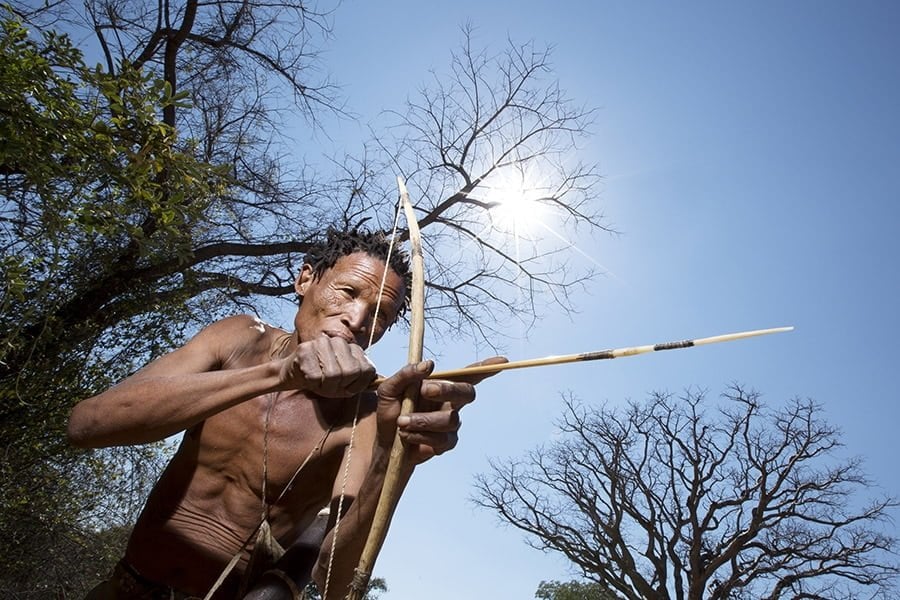 I got home and this thought wouldn’t leave my head.

I started to research more traditional cultures. I also wanted to improve my photographic craft, so I booked my next trip to Kenya. The Samburu and Maasai were at the top of my list.

On that trip, I heard great stories about Ethiopia, so the next year I went there.

I was a dry rag to water: I soaked it all in. I wanted to learn and see for myself. Wikipedia did not have the answers for the questions I had yet to ask. The experience was everything. 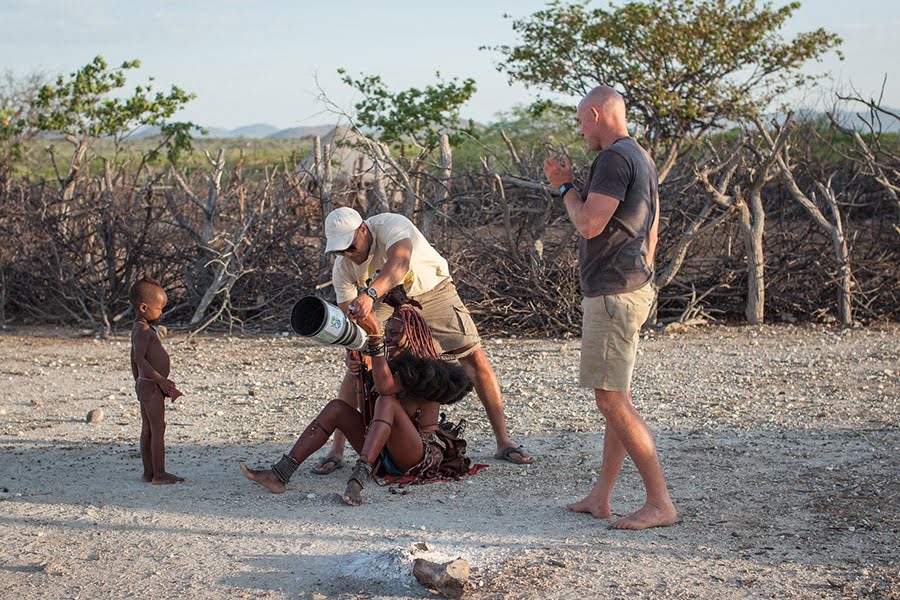 Teaching the Himba how to shoot | Image taken on iPhone, courtesy of Holly Lane

I relied on guides to get access. They were the interpreters, but I still felt like something was always lost in translation.

I also felt my visits were very impersonal.

The villagers I met had been exposed to inquisitive travellers like me before. They knew we were walking ATM machines, so doors were open and I was invited to photograph them, but always at a price.

It was not the real experience I was after, and my images suffered.

After many village visits, I was jaded. I don’t like photographing people at the best of times. My questions weren’t being answered and my shots sucked, no matter how much I tried evolving my style.

I realised I needed more time. That’s something most people don’t have, but I did. I went home, studied and planned.

Inspiration from my notebook.

I had decided that I was going to visit the Himba in Namibia next. I had seen some in bigger towns, but not in villages.

I read everything–not Wikipedia or blogs. I bought books. There are not many books around on the Himba, but I searched high and low.

Their traditions, the cultural faux pas, the different hairstyles; I wanted to be prepared and be seen as someone who wants to learn, not just shoot, pay, and run.

I thought I was prepared. I had watched documentaries, and I sourced studies. I thought I had done my homework.

When I went to the first village it was, as I saw it, a Himba zoo. Pay your fee, take some photos, go away. I hated it.

Standing in front of people, staring at them staring at me, was not my idea of fun. I was daunted. I couldn’t interact with them. It was a failure. 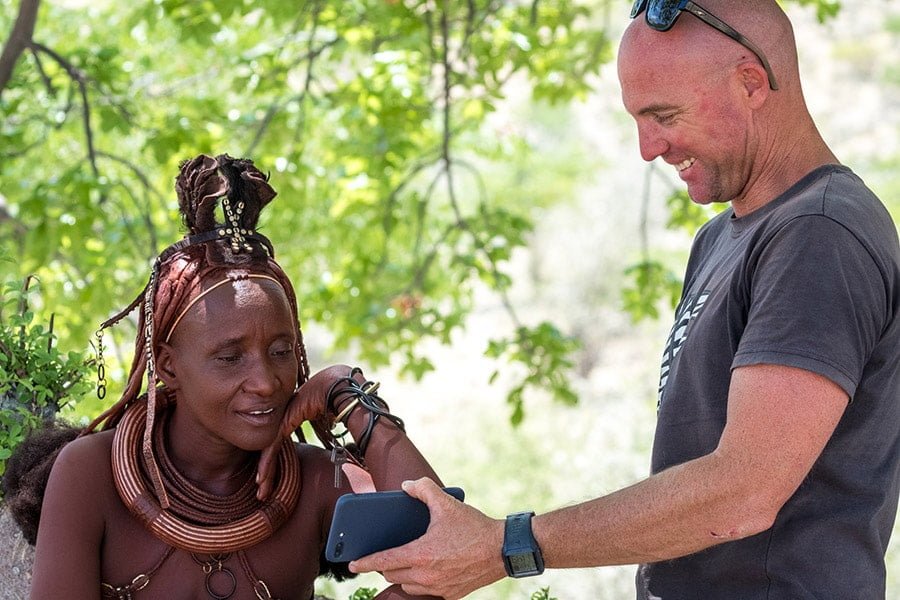 I told the guide that the visit sucked. It wasn’t what I wanted to experience. My guide was offended and said he would introduce me to his wife.

I was caught off guard. I knew marriages were arranged, but this was an interesting side of the culture: My guide was only 16.

I asked if we could chat about this so I could learn more. He was only too happy to talk, at the cost of a can of coke.

Done deal. We chatted long into the night. The next day we visited his village, and the rest is history.

It still didn’t take away from the whole daunting experience of being an outsider in a traditional village, though. I needed to find another way. 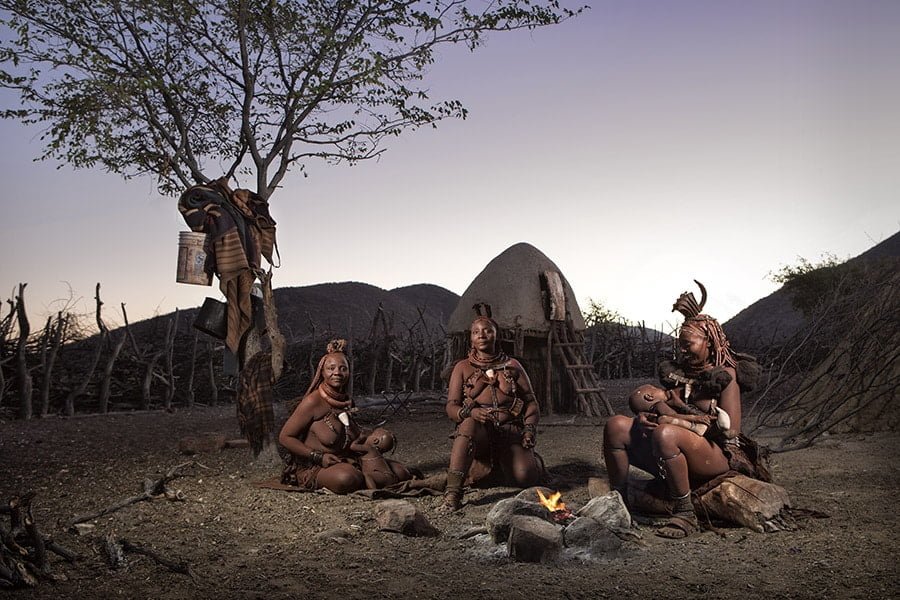 This time, I sat in that guide’s village for days before getting the camera out. I built relationships. I started to figure out who I would point my camera at.

It’s easier for everyone to photograph a friend than it is a stranger, so that’s how I beat my inner fear.

The fear still sits in me to this day, but overcoming it, building that rapport, doesn’t take as long as it did then.

It could be a quick conversation, a laugh shared at a funny sight. Gaining confidence is about having a bond. It’s something I need in order to shoot.

If I don’t have a relationship with the subject, what good is the photograph? It’s a memory of what?

With a story and a connection, it becomes an experience worth sharing. 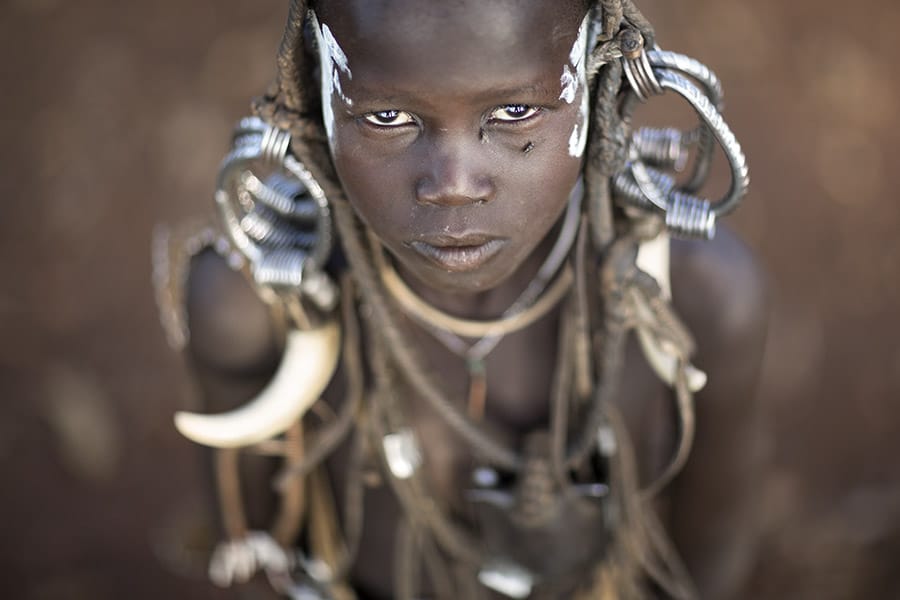 To forge that relationship, all you have to do is communicate and interact. It’s why you should be there.

No amount of likes or comments will be better than knowing you managed to strike up a conversation with someone who speaks a totally different language.

They tell their stories, I learn, and I may even be invited to share a meal or experience something many people never will.

Just spend time and your images will shine.

It’s not about the equipment. It’s about the subject, and the draw it offers to those you will share it with. 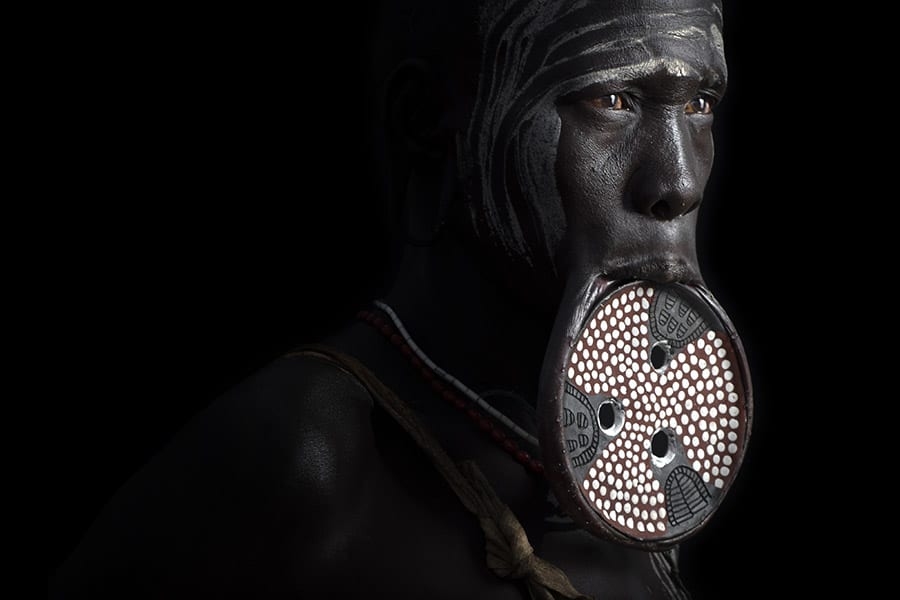 What’s the best camera to use for this kind of work? The one in your hand!

I started with a film body, then a very basic DSLR. They were not the most expensive at the time, but they did the job. I could spend more money on travel, which was the really important thing.

They were not top-of-the-line, but they took good shots. I still show some of my early images today, and people don’t realise these photos weren’t taken with a pro camera.

I then began getting second-hand professional cameras. They were better quality than the entry-level DSLRs available.

I put the real money into my lenses, but I did not go straight to Canon L-series lenses. I went to prime lenses. 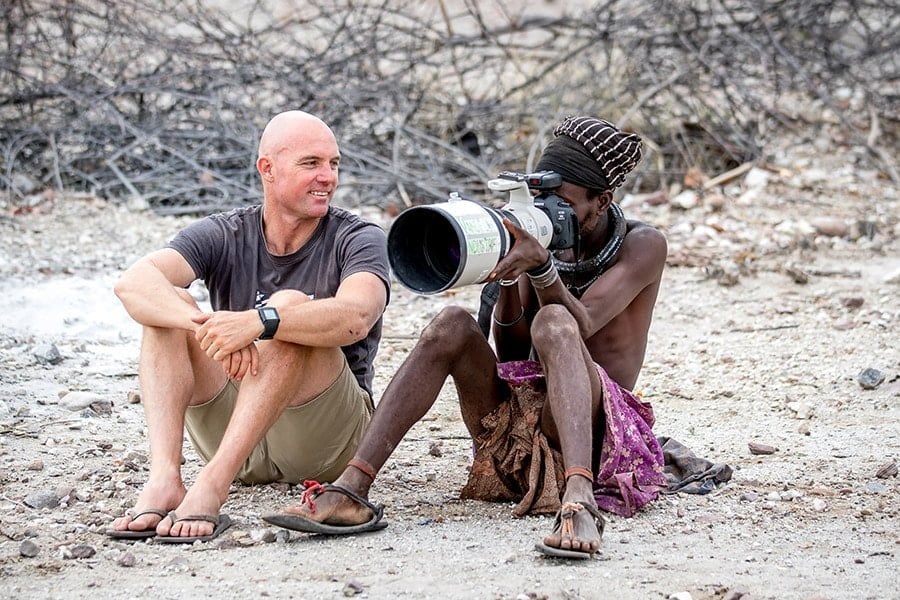 Some prime lenses are very expensive. Others are cheap as hell, but deliver amazing results!

. I got so much work done with this lens. It opened a new world for me, and it works amazingly well in the low light inside of huts.

Many people say they don’t like primes because they limit your view or make you move around. For me, this makes the shot. It forces me to create compositions that I may not have thought of.

If I really want a shot, I move around and chase it. If I don’t want it, I don’t waste space on my cards. 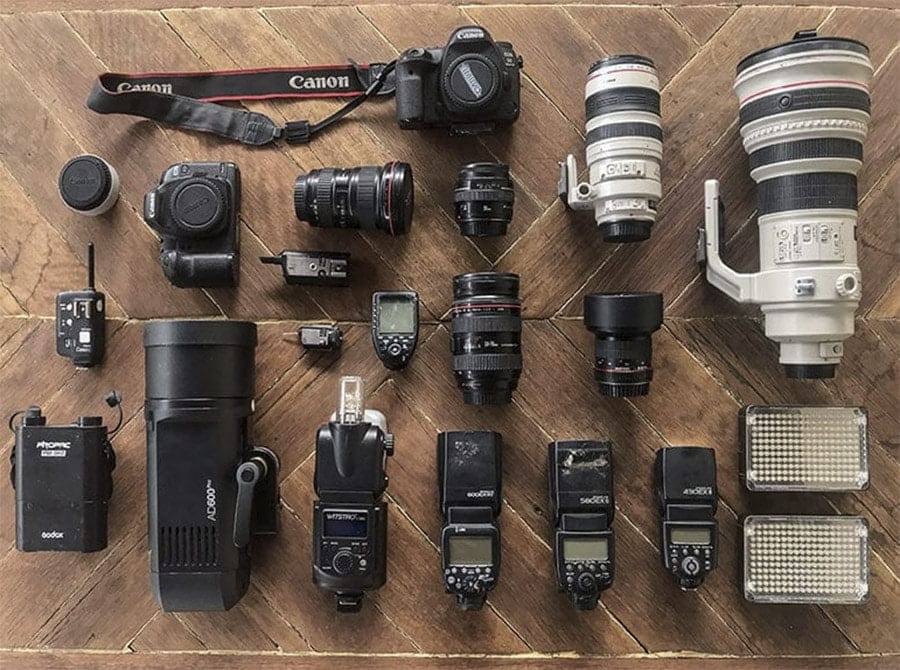 I’ve spent a lot of time doing what I do, and my kit has grown with my ideas.

In the beginning, getting a quick candid shot was what it was about. Keeping my bag light and agile was the world to me.

Don’t overthink your kit. Have a body and a lens, and just shoot. Don’t let equipment detract from the experience.

The experience, the time, and earning access is what counts. 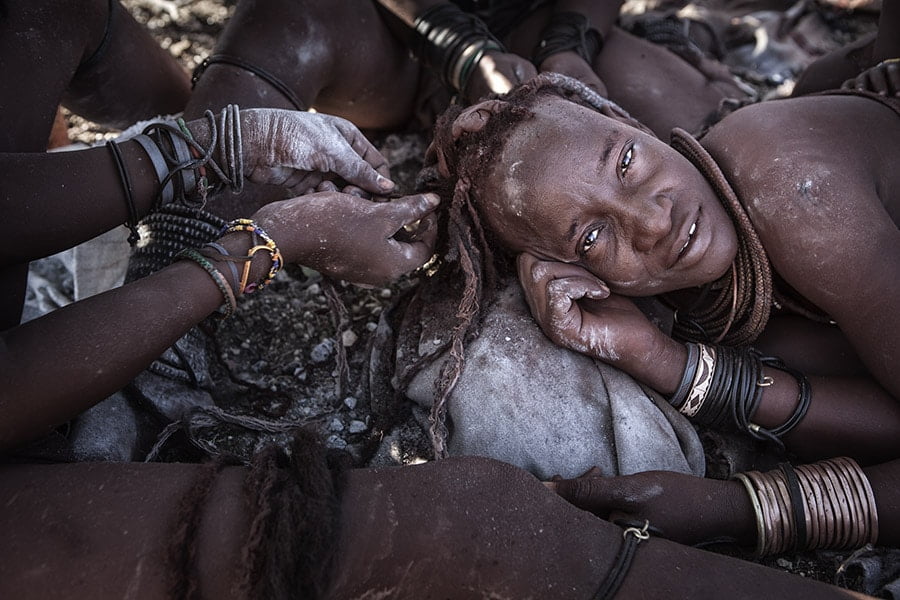 For this shot of a Himba woman getting her hair done, I sat, waited, and watched.

When there was a break in the work, I shot, sat back and waited again. 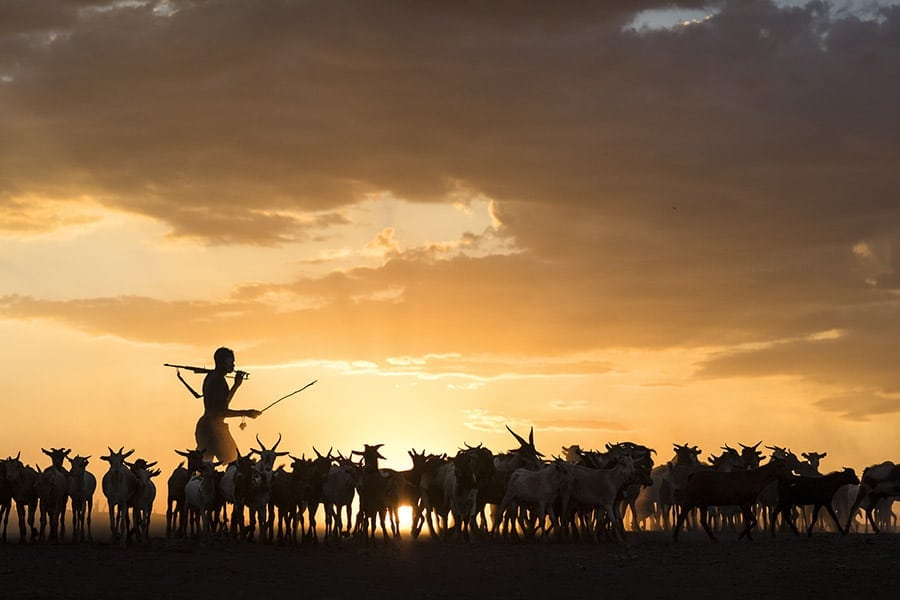 I now lead photographic tours for small groups. As a guide, I see that people get nervous.

They place so much importance on one shoot or village visit that when the time comes, they blow it. They’re worried about getting the pictures they want to create, and they forget about the experience.

I often have to calm them down and just get them to relax.

If you’re ever in a situation like this, step back. Walk away. Collect yourself and then go back in.

I do this a lot. Being in front of a whole village is daunting. Ideas sometimes don’t flow, so I walk away and take a break.

I have a sketch book for ideas, so I look at those and then go back in with an idea. 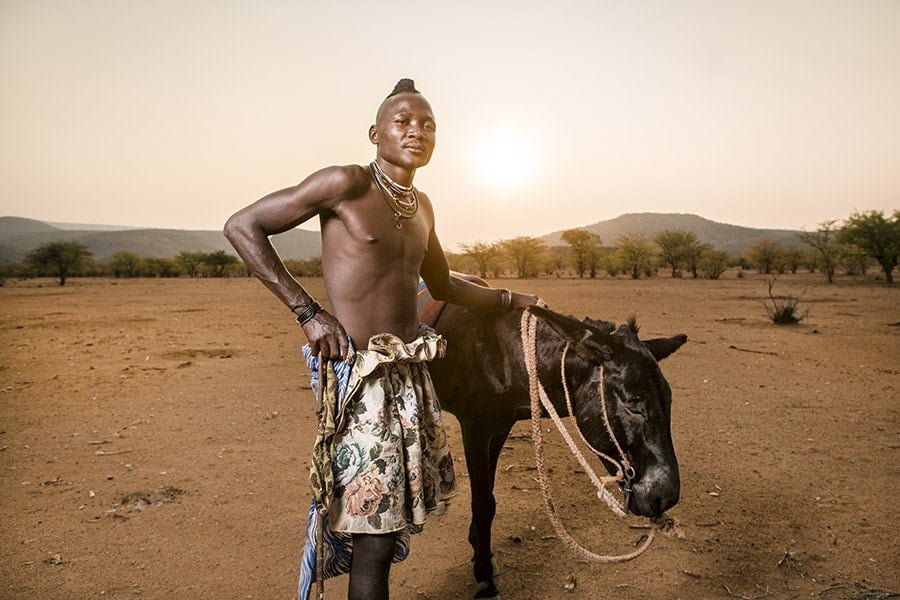 Hardly any of these ideas pan out, but it gives me something to think about as I work. I can then sit, talk and wait for things to happen.

The last trip I did was in the Omo Valley of Ethiopia. A huge storm rolled in. I had a small group of 7 photographers who wanted their shots.

They saw the storm and fretted that their shoot was gone with the good weather. I had to make a plan, so we moved the shoot against a blank wall inside a school.

Sometimes, your ideas change and you have to have backup plans. Having a sketch book with ideas will always help. To this day, I still sketch or write ideas. 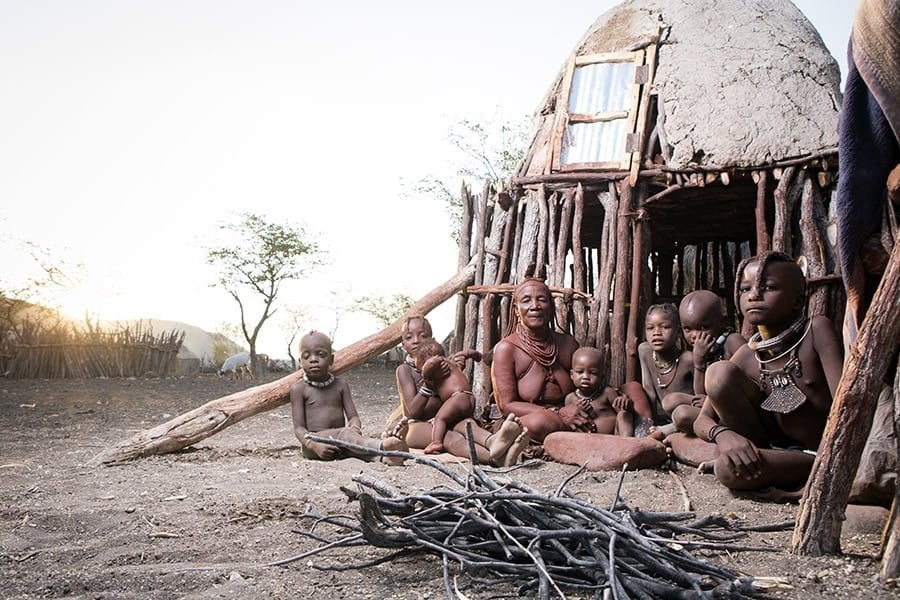 My final piece of advice: ask yourself what you want. You have to know your purpose. Great images don’t just happen. They’re created with dedication and perseverance.

Being on a photographic tour breaks some of these boundaries, but you still need rapport with the person you’re pointing your camera at.

Also ask yourself if you’d feel comfortable having a lens stuck in your face. Be compassionate and caring. If you forget this, bad vibes will flow and your images will suffer.

Treat all your subjects like your friends, because in the end you want them to be exactly that. That is what will make your images really special.

Disclaimer: The products in this post may contain affiliate links. 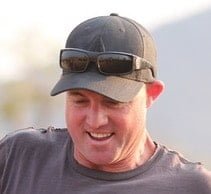 Ben McRae is a photographer based out of Wollongong on the beautiful South Coast of New South Wales, Australia.