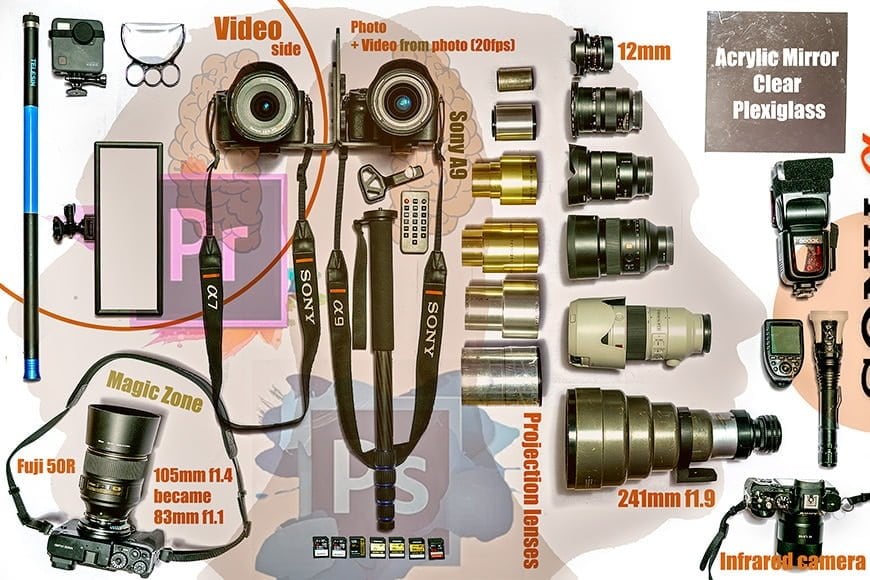 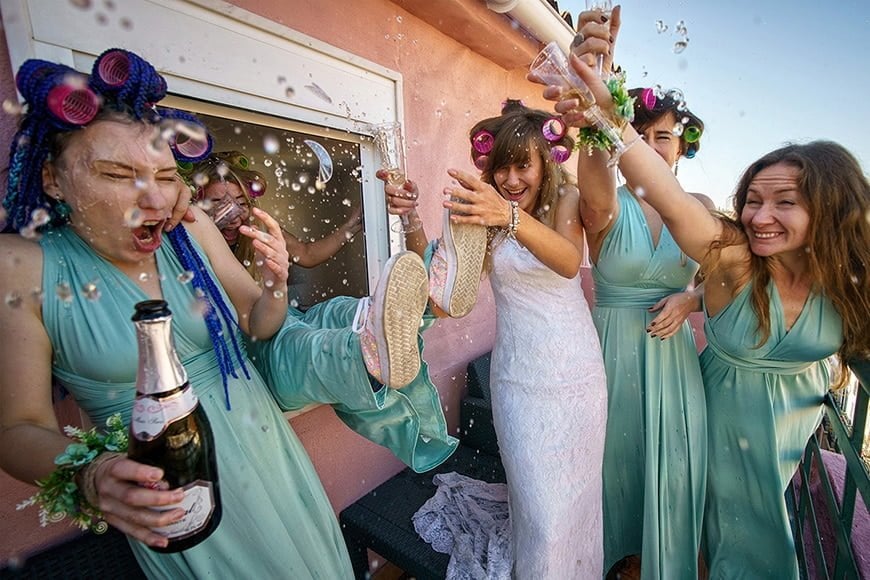 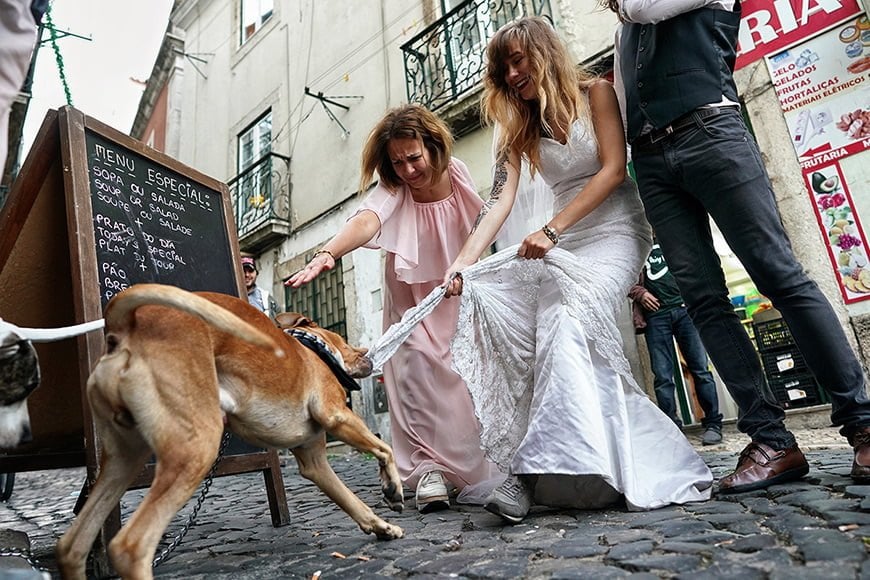 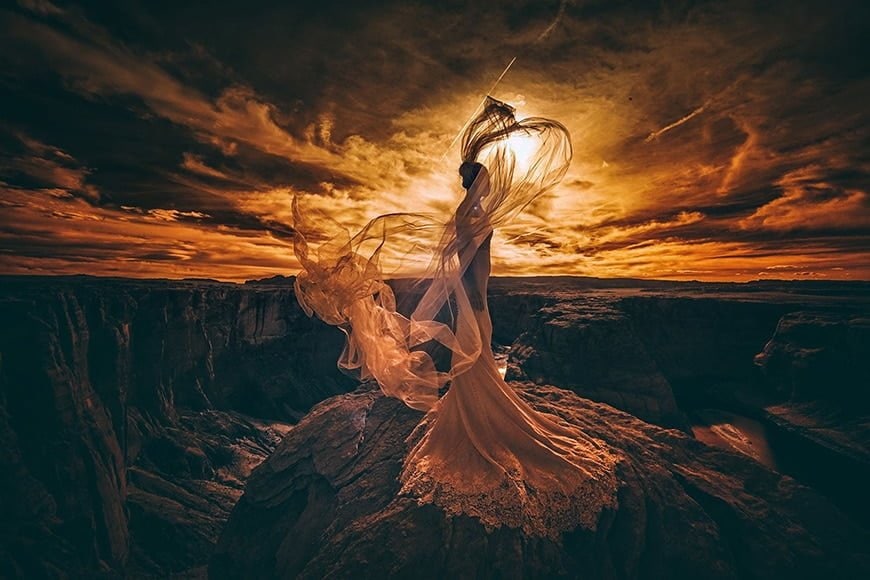 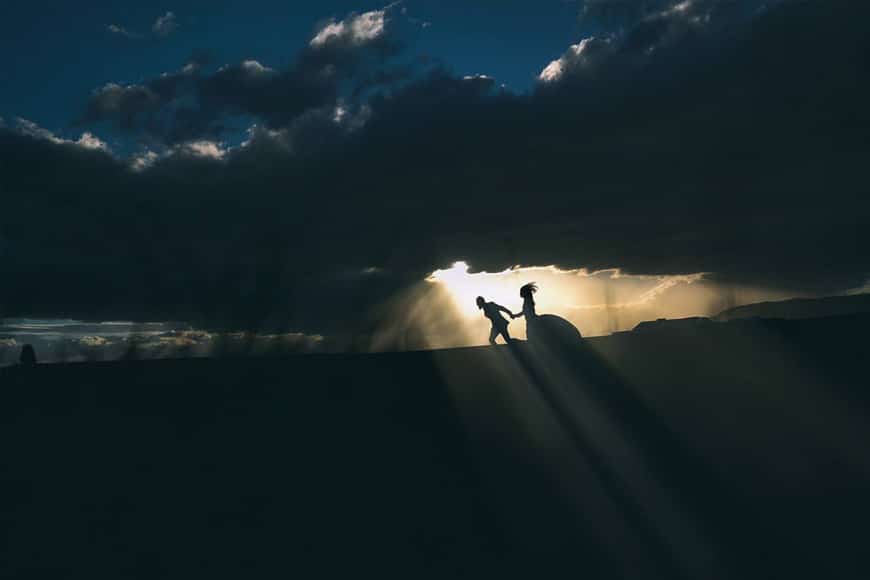 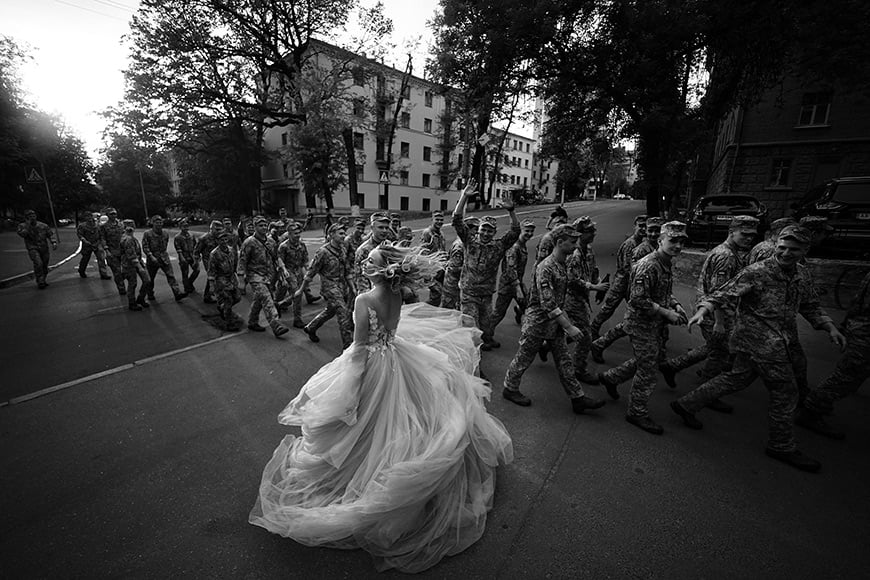 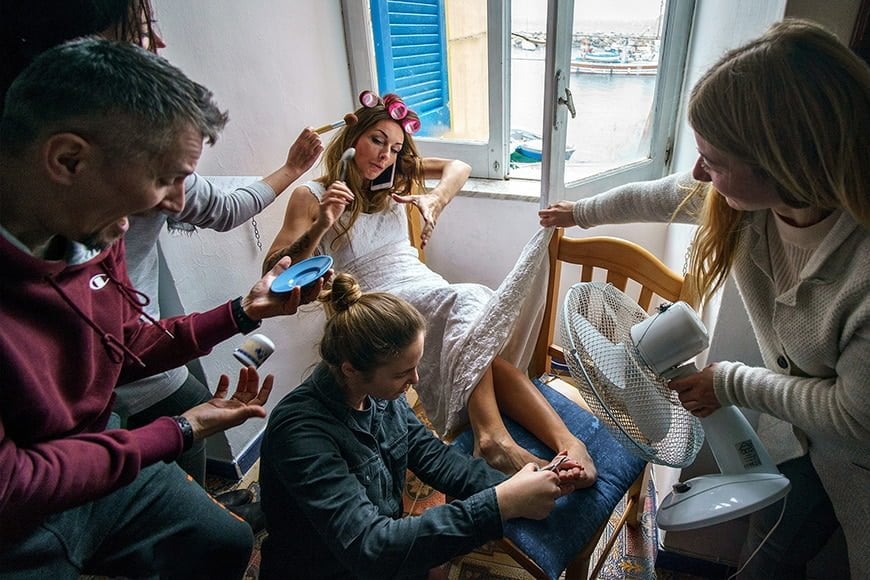 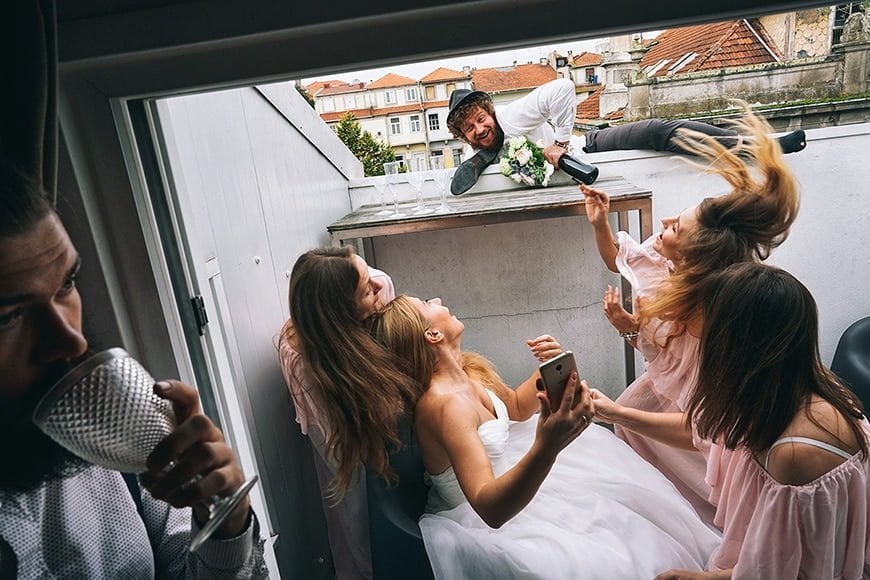 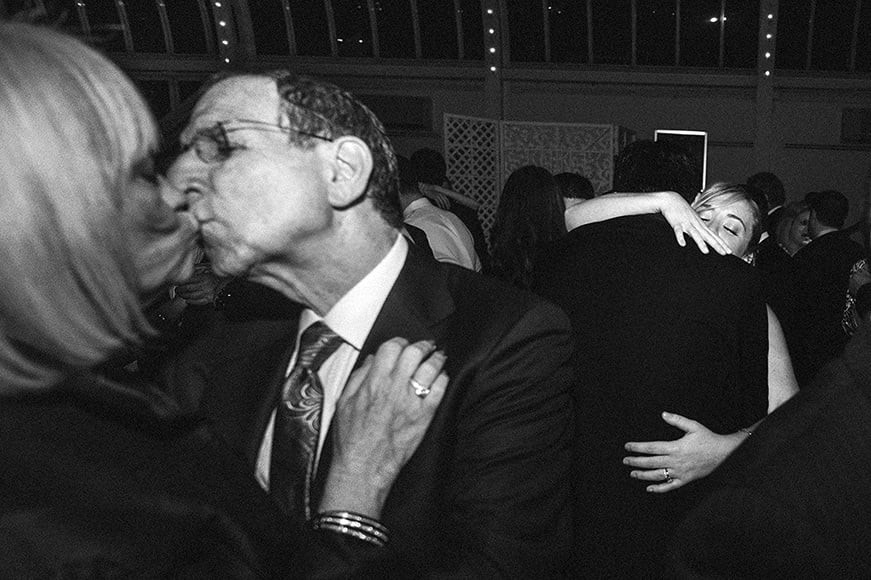 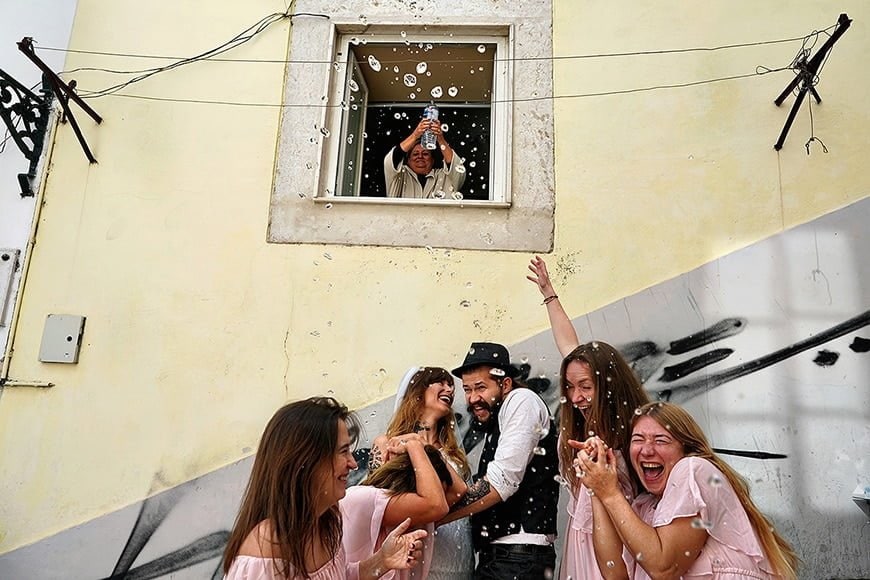 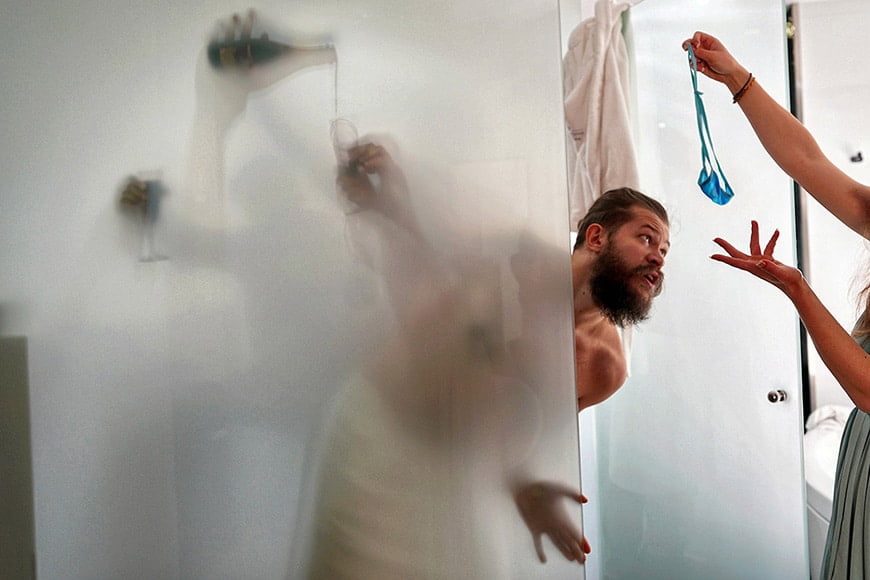 There have been several changes in my gear and vision since 2014.

This is a magic camera – all my lenses became wider with an increased depth of field (everything multiplies by 0.79). I attach my old Canon lenses to the 50R via a lens adapter.

for the video and a9

for photos), then I take a still from the video (4K, Hslog) and make a video from the photos from my a9

(I shoot 20 frames per second and stick all the images together in Premiere CC).

4) I upgraded my computer and my SD cards. I now have 3x 256Gb Toshiba Exceria Pro

) and sometimes take a still from the 5.2K video.

What’s in the picture?

Flash light with a zoom 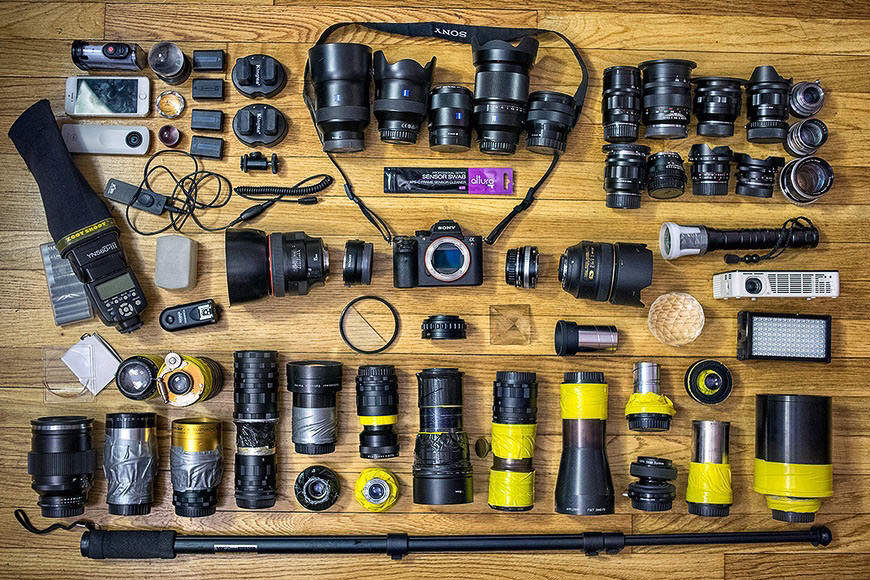 I decided to update my old Shotkit from June 2014 because I’ve completely switched from a Canon-Nikon system to the Sony Alpha 7 series.

Now I have the Sony A7R II

Why did I do it? Here are my reasons:

1) I can see exactly in the electronic viewfinder what I finally get (I can control for 100% white balance, over or under exposure)

5) Cost lower that Canon-Nikon (especially for Sony A7

and Sony A7 II

6) Now (Finally) I can use lenses with bayonet M (Leica).

7) I can shoot freelensing (holding lens in my hand not attaching to the camera) and get a tilt effect.

8) I can use any projection (or any other camera system created on this planet for the last 150 years).

have image stabilizer in camera and it really works especially on a lens longer than 85mm.

Why do I have so many lenses on my Shotkit?

I use my lenses as brushes. Every lens has its own bokeh and character. I choose one depending on the situation and my mood.

Why do I use so much yellow sticky tape on the lenses?

These are projection lenses without any mount. With sticky tape and metal rings, I’ve adapted them to a Canon or Sony bayonet, then I use them with a helicoid adapter for smooth focusing (on a Sony A7

it works very well because it has a focus peaking (with 3 levels).

So  I can be focusing manually faster than in an autofocusing mode!

When I shoot video I use only lenses with autofocus because it’s easier to catch my subject, especially if they move.

When I shoot photo I do it only in manual focus mode because it’s easy to control the whole frame if somebody is in the corner and I want to focus on that subject – with manual focus mode and focus peaking, it’s very easy to do. 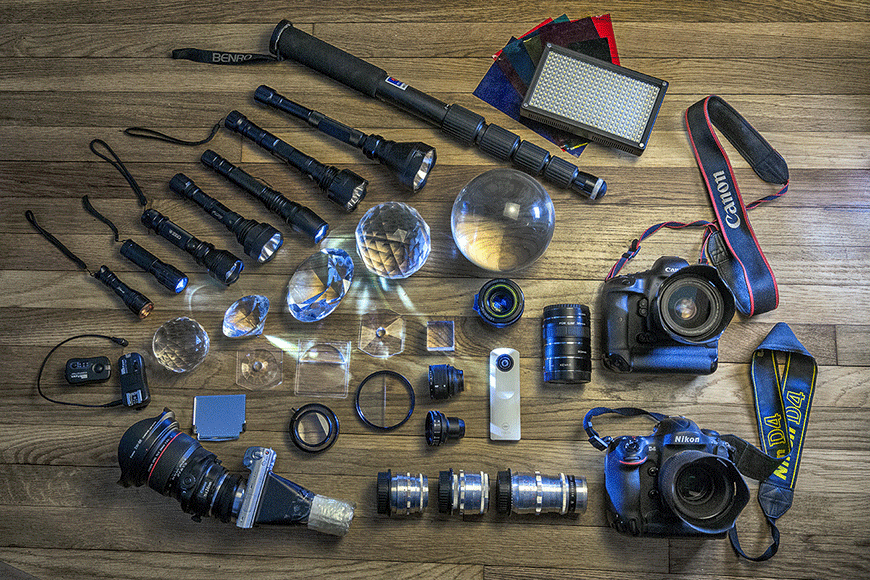 I got the first camera in my life when I was 30 years old. Before that day I never had any experience with any kind of photography. For the last 10 years I’ve been shooting only weddings and engagement sessions.

I think that equipment is very important but a photographer must imagine the whole scene of shooting in his mind before taking anything from his bag. Before starting, I estimate what time I have to shoot, what the distance to my subject is and what time I have to play with different angles and lights.

I’m always trying to imagine my result before I press the shutter button – even if I shoot in a photojournalistic style without contact with my models, I estimate time, distance, light and the behaviour of people in particular situations. I shoot a lot of pictures during the day (sometimes more than 10,000 during 12-14 hours). Most of them are out of focus or don’t have good composition and framing because usually I’m not looking through the viewfinder and shoot holding the camera over my head or from the floor.

I try to imagine the whole scene in my mind and go to wherever it is possible to catch people’s emotions or a good interesting source of light.

I like to use any source of light and any reflection which I can find around, and in addition, I bring some of my filters and other glass things (see above). I collect any piece of glass with an interesting reflection and use creative filters from Cokin.

I have two camera brands Nikon and Canon. My first camera was Canon and till 2008 I shot only Canon. Then, when the Nikon D3

had a better ISO performance and so I decided to keep both brands.

Today I can notice the difference between these two brands – some cameras can focus in the dark better than the other. For the last 6 years I know almost every single aspects about each brand, I know which will focus faster in which light condition, by combining one cameras with another lens.

I have a few bags with my equipment and I bring everything to each wedding. For me lenses are like brushes for a painter. Depending on my mood and situation, I will shoot on manual focus with a Trioplan 100mm f/2.8 or on a Nikon 58mm f/1.4

Every time I try to use a different lens because I want to give my mind some exercise,
I don’t want to stick with some favorite focusing distance and angles but at the same time I use a logic,
if I don’t have time and space I will use a flashlight with a zoom lens like 16-35mm or 24-70mm
but when a have a chance to switch my lenses I will do it.

I feel like I’m painting with a light. I can shoot the whole event with one or two lenses, without any inconvenience because I know how to manage my time and space.