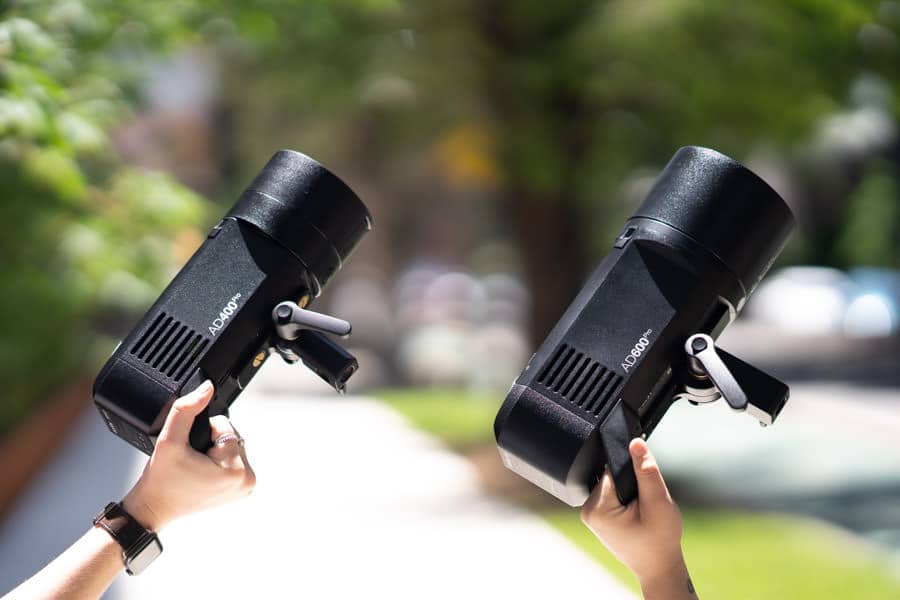 For any photographers on the go, we know how important it is to have compact and portable lighting gear. And that goes whether you’re working outdoors, or wanting to be able to easily set up and add lighting for indoor photography shoots.

So, with that in mind, I’ve reviewed the features of the Godox AD400Pro TTL Flash compared to the AD600Pro Flash. The Godox AD400Pro is the newest portable strobe offering from the brand. It’s an all-in-one with some great features for flash photography.

Right from the outset, it’s clear that Godox has put some thought into making the AD400Pro flash even more transportable and convenient by providing a carry case with the unit itself – an accessory that the AD600Pro does not come with.

The design and construction of the carry bag itself is sturdy, and the componentry fits snugly and securely into the pre-cut foam inserts.

Included in the carry bag is the flash unit, the 400-watt bulb, a reflector with protector cap, a Bowens Mount adapter ring, lithium-ion battery pack, charger and power cable.

It also comes with a set of screws and an allen key for fixing the included Bowens Mount adapter ring to the unit.

The AD600Pro comes with many of the same parts, including the flash unit, 600-watt bulb, reflector and protector cap, lithium-ion battery pack, charger and power cable.

The main differences are that the AD600Pro does not have the option for interchangeable adapter rings for Bowens, Profoto and Elinchrom, and obviously there’s the 200-watt power output difference between the two flash heads.

To ease traveling with the AD600Pro, Godox has carry bags available for purchase to protect your valuable gear, with the CB-09 being the equivalent to the AD400Pro’s provided carry case.

For a quick overview of the features of both flash units compared with each other, I made a comparison chart below. 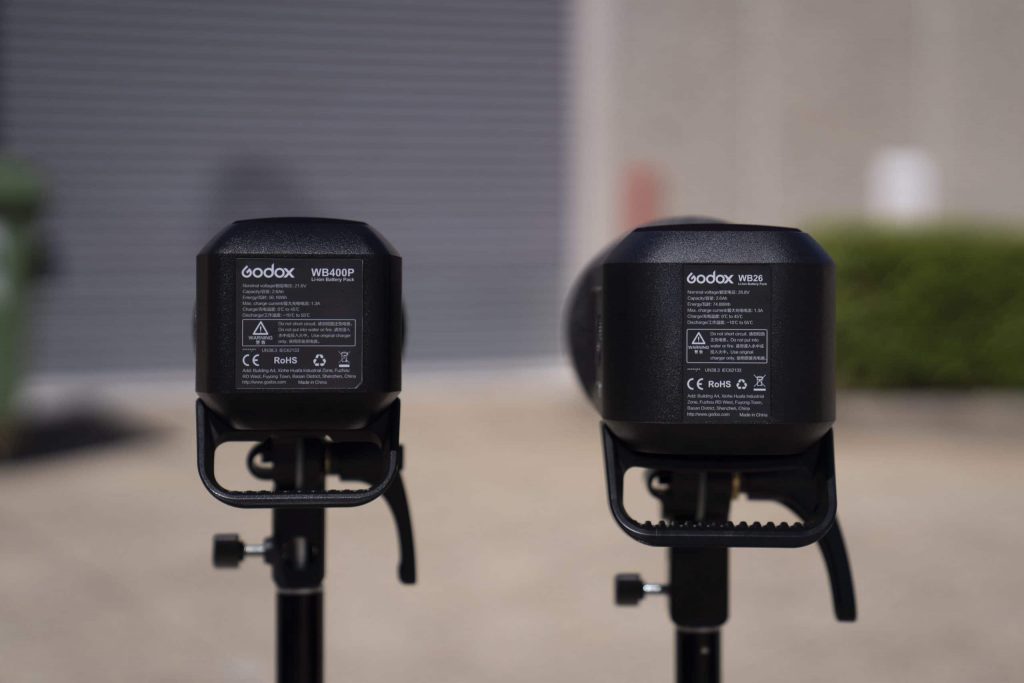 In terms of physical size for both units, the lithium-ion battery and charger are relatively small and lightweight,  which is always a bonus when using and handling the overall unit.

There’s an indicator light on the battery charger itself, which makes it easy to keep an eye on it while shooting.

Both units also have an inbuilt function which when switched on allows the units to turn off automatically after a set amount of inactive time.

The recycle time for both the 400 and 600-watt units are lightning fast at just 0.9 and 1.0 seconds at full power respectively. 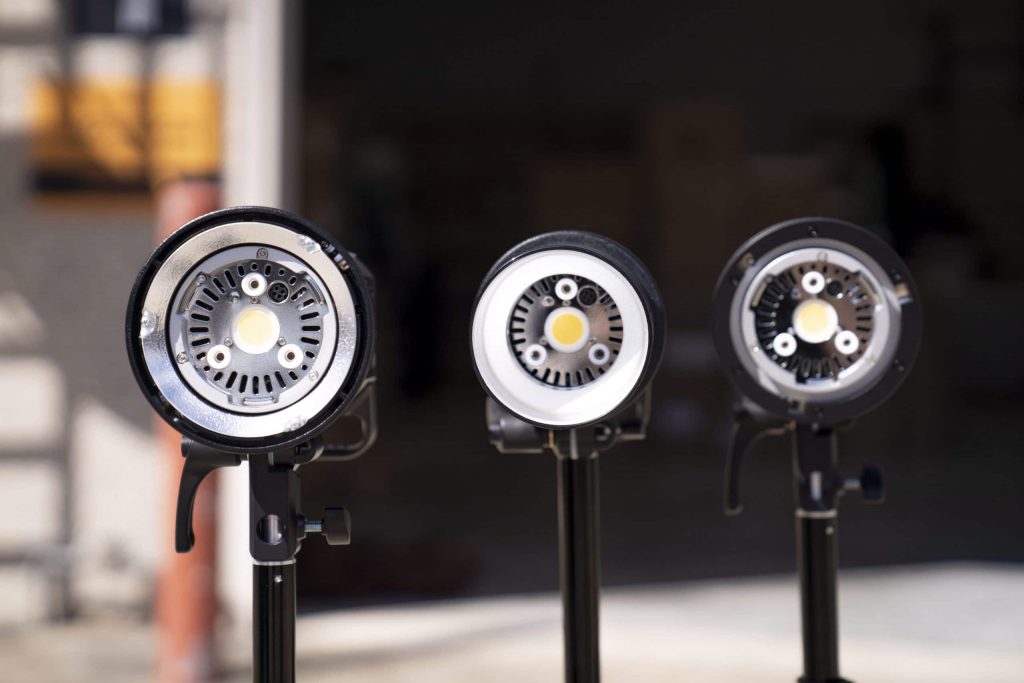 The Mounts – The Game Changer!

One of the most impressive features that the AD400Pro has that the AD600Pro does not, is the added inclusion of the interchangeable mounts for Bowens, Profoto and Elinchrom!

Not only are the mounts easy to fit with little room for error, but they also provide versatility for use with other softbox lighting accessories and gear that you may have purchased in the past.

The inclusion of interchangeable mounts does increase the price, bringing it closer to its counterpart the AD600Pro, but the ability to use these different mounts is a big bonus, which makes this price very reasonable.

In terms of mounting these adapters, all you need to do is use the provided tools and follow along with my instruction video below:

Lighting modifiers such as softboxes, barn doors, snoots and beauty dishes are also readily fitted directly to the unit or the attached mount.

Godox is also releasing their own range of modifiers to fit directly to the unit. However, as a shooter who already uses Godox lights, I have several Bowens mount modifiers so I find myself using the Bowens mount adapter almost every time. 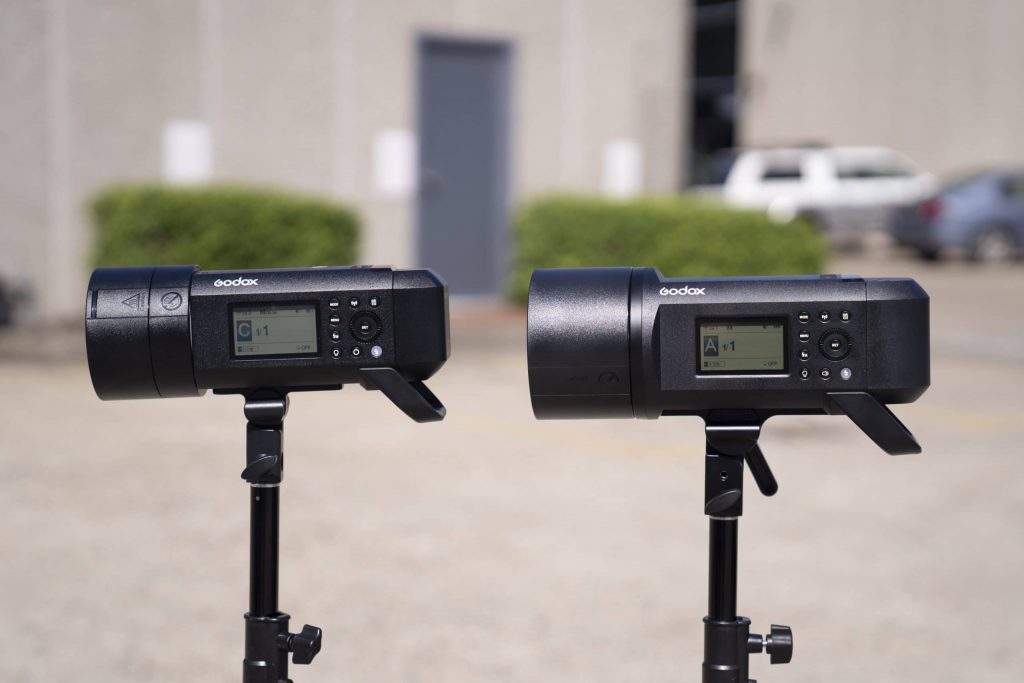 The process of adjusting to TTL, Manual, or Multimode is straightforward, and it is easy to customise the settings and play around with different lighting effects – these can all be adjusted using the side control panel on both units.

One feature that has been added into the AD400Pro that the 600-watt alternative doesn’t have is the locking function on the control panel, this requires you to rotate the dial on the unit before it turns on.

This comes in handy when traveling so that the flash can’t be accidentally turned on and drain the battery. 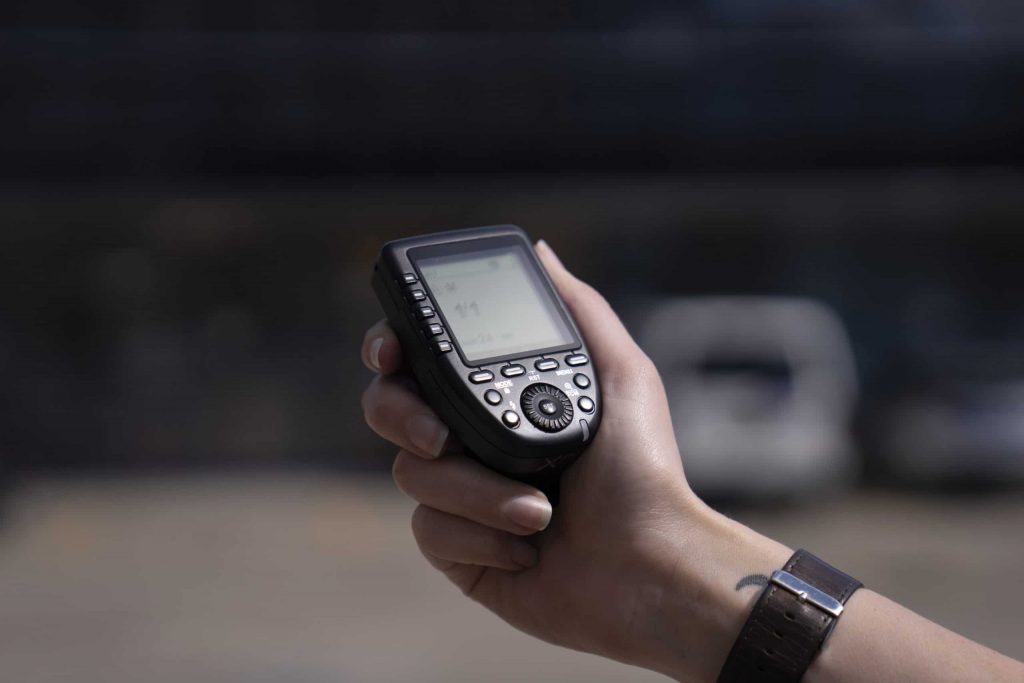 With both units featuring Godox’s 2.4GHz X-System Radio Receiver built in, setting up a shoot has never been easier.

With just a few clicks on the Godox XPro trigger, you can set the correct Group and Channel settings and you’re ready to shoot!

You can find the wireless triggers here – they are brand specific for Canon, Nikon, Sony, Fuji, Pentax, Olympus and Panasonic. 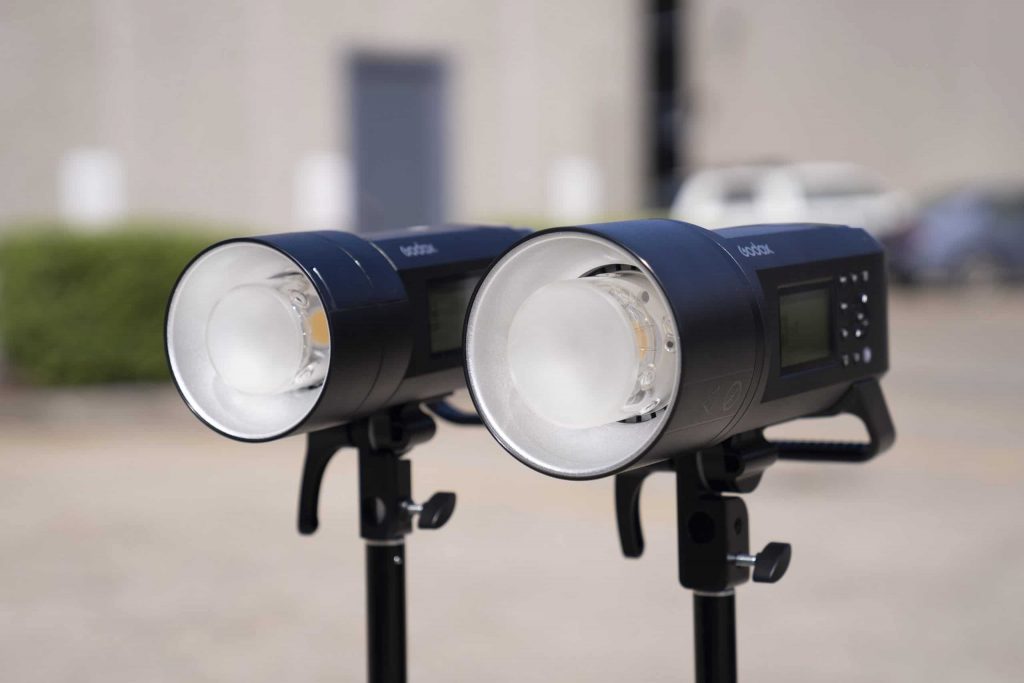 Comparing the modelling lamps, the AD600Pro comes out on top with a 38W COB LED, compared to the 30W COB LED on the AD400Pro.

Both are 4800K which is equivalent to outside daylight. The strength of the modelling lamp really helps with focusing in low light situations and seeing what the light will do without having to do test shots.

There are 3.5mm jacks situated on both units for PC sync connectivity for wired shooting or if you have any other wireless triggering system that you would like to use.

There is also a USB-C port to keep your firmware updated, with new versions released on the official Godox website here. You do however need to use a Windows Computer to update, as it will not work on a Mac.

Both units feature a handle for positioning and adjusting while shooting. These handles are also removable, which is ideal if you need to save space while traveling.

They both also contain tilt mounting brackets on the base, allowing you to position the light in any way you see fit. 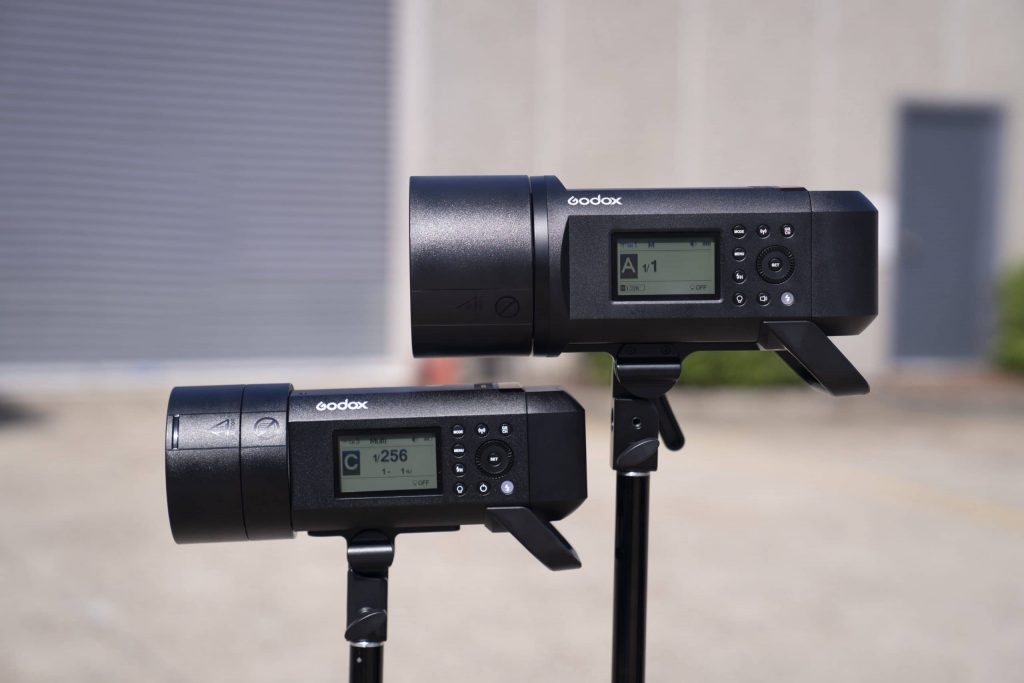 Overall, the AD400Pro and AD600Pro are both amazing portable flashes that perform very well in both indoor and outdoor settings.

If you feel as though you don’t need the extra 200-watts that the AD600Pro provides, then look no further than the AD400Pro for your next flash purchase.

Photographers nowadays need everything to be portable, lightweight and easy to set up and take down, which is exactly what the AD400Pro provides.

Having a battery powered flash not only removes the need for AC Power Outputs and wasting time trying to find the outlets (if there even are any available), but also eliminates the tripping hazard of cables on set.

(If you’d like to read more about Godox strobes, check out this review of the Godox Xplor 600 HSS TLL.)

The addition of interchangeable mounts on the AD400Pro gives you the versatility to be able to mix and match with the equipment that you’ve already invested in, which is a feature that no other strobe head on the market can do.

This makes the AD400Pro a great addition to the Godox range and the perfect add-on to your gear. 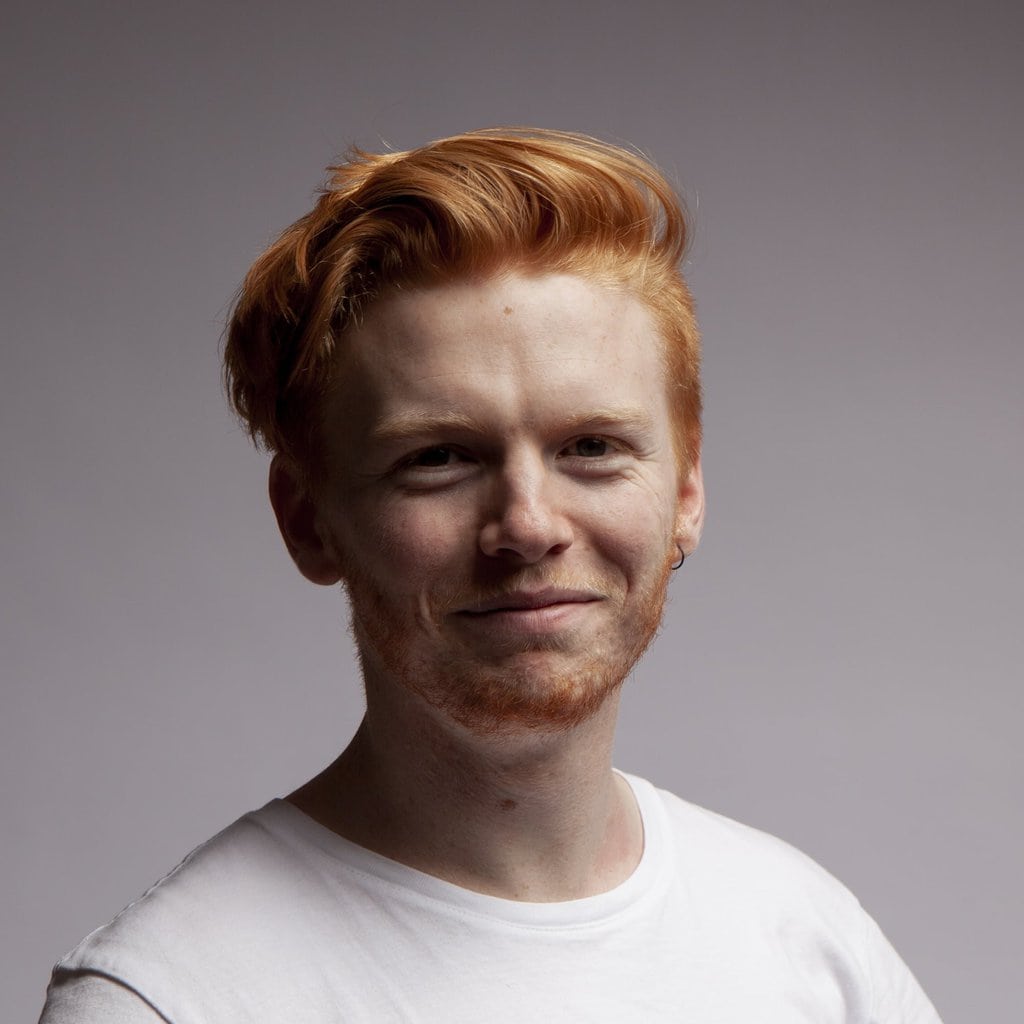 Pat Barlow is a professional urban photographer from Sydney and founder of Black Jellybean Co.