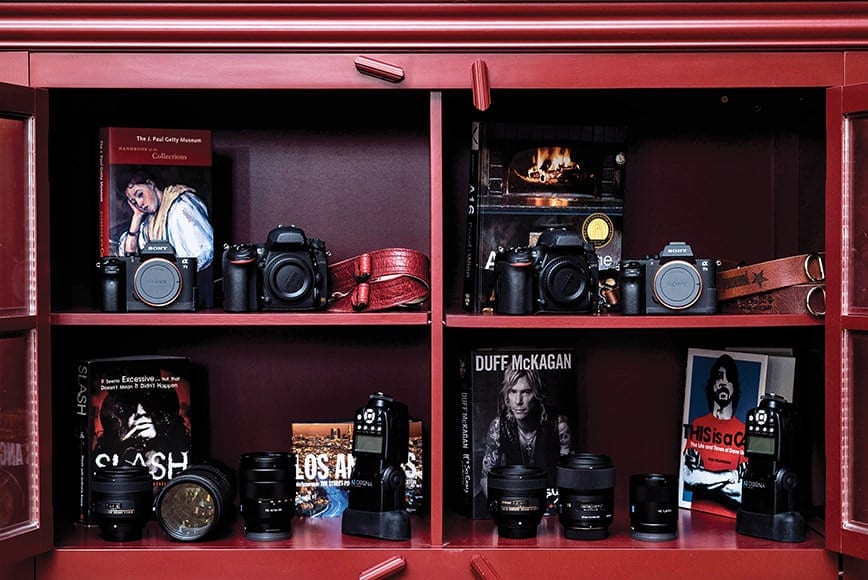 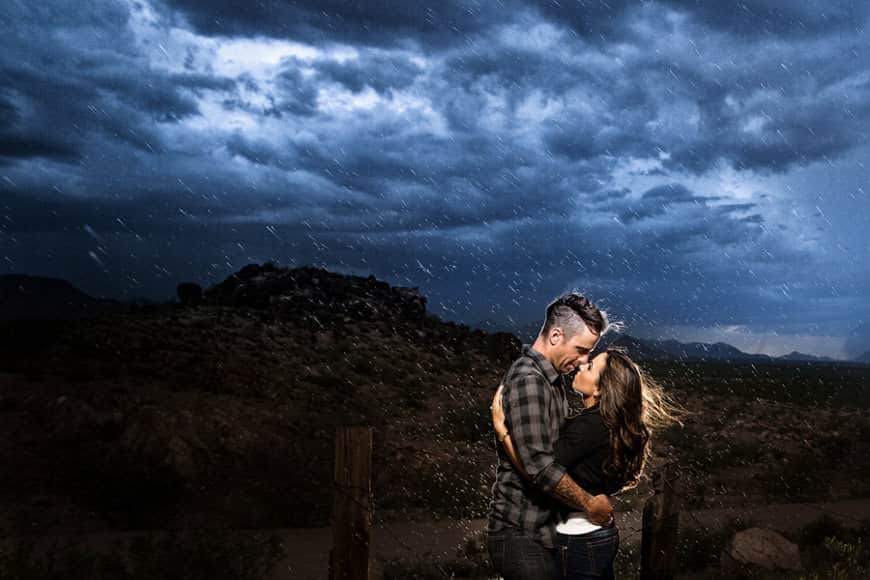 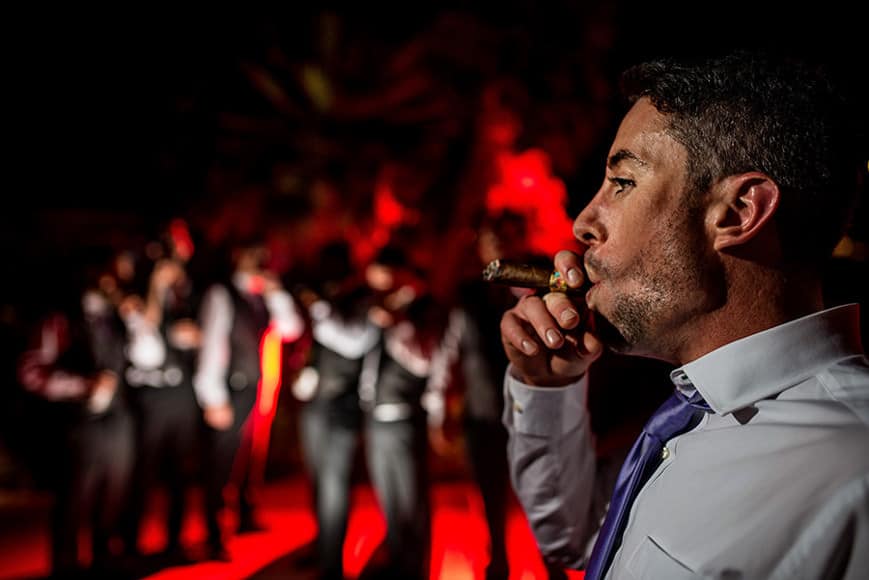 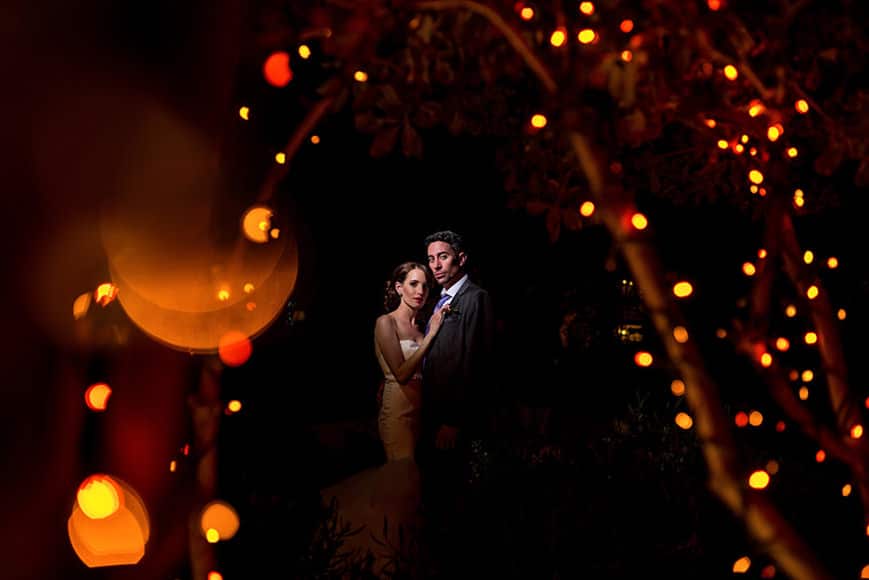 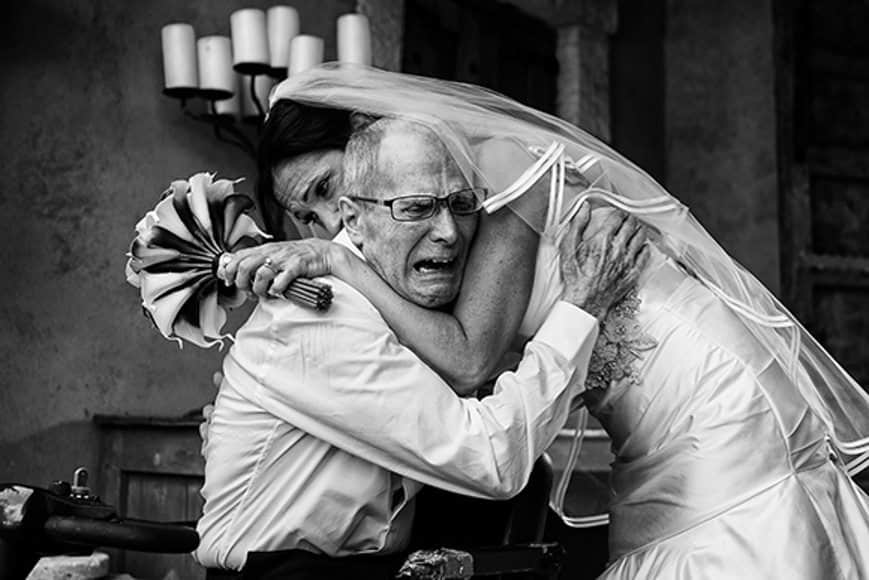 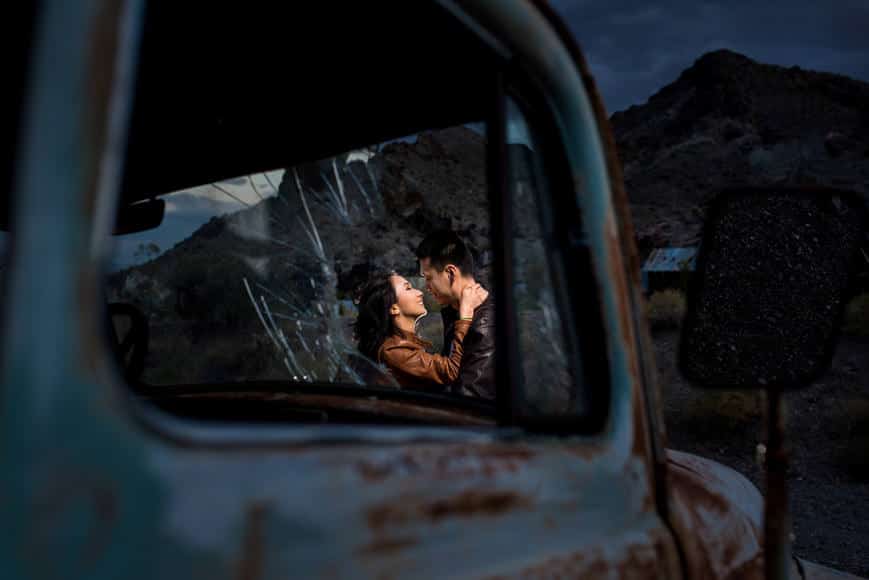 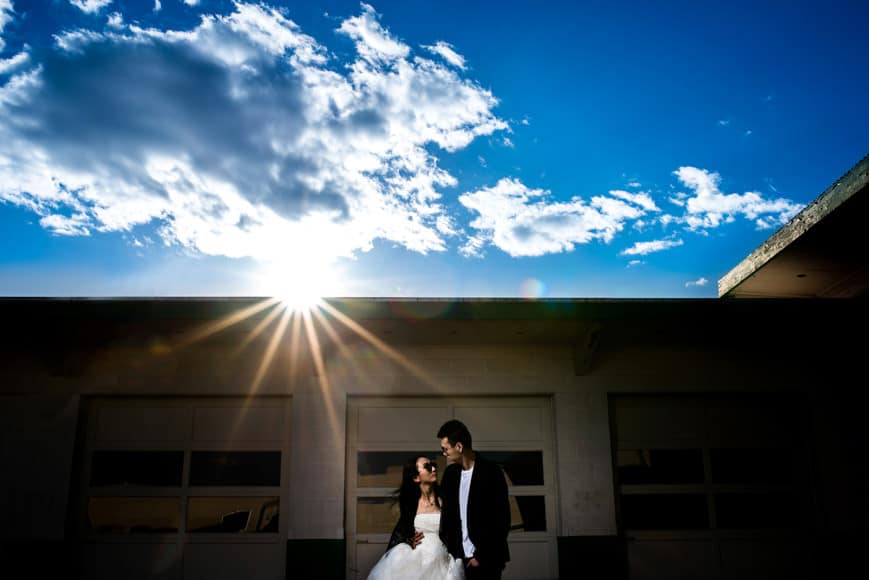 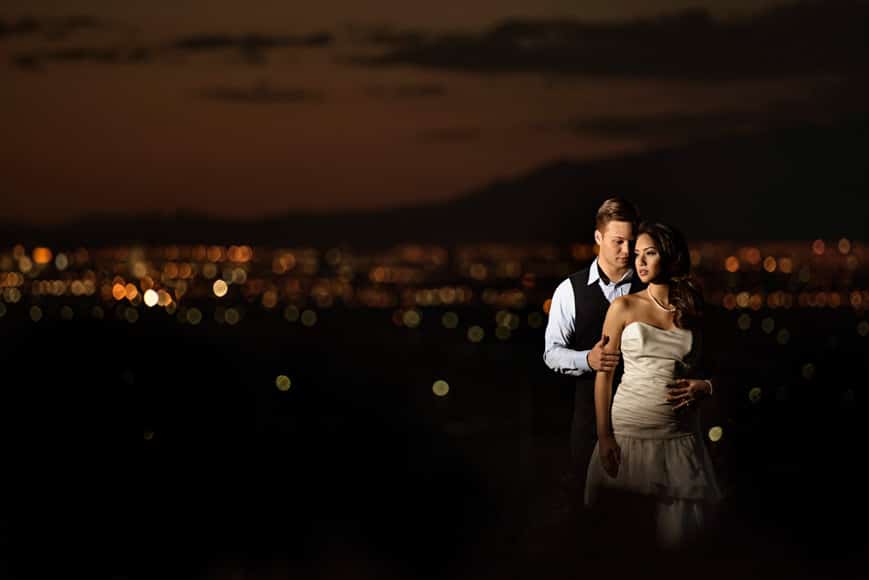 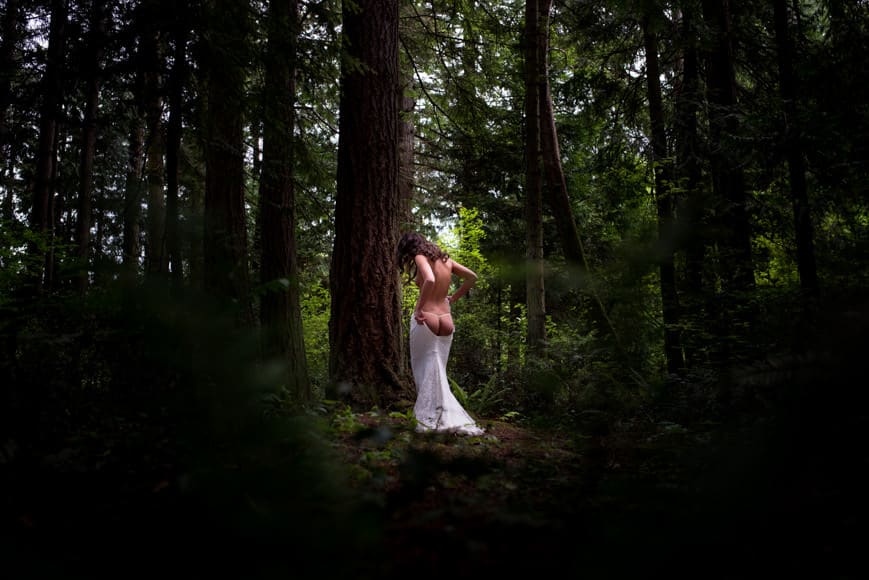 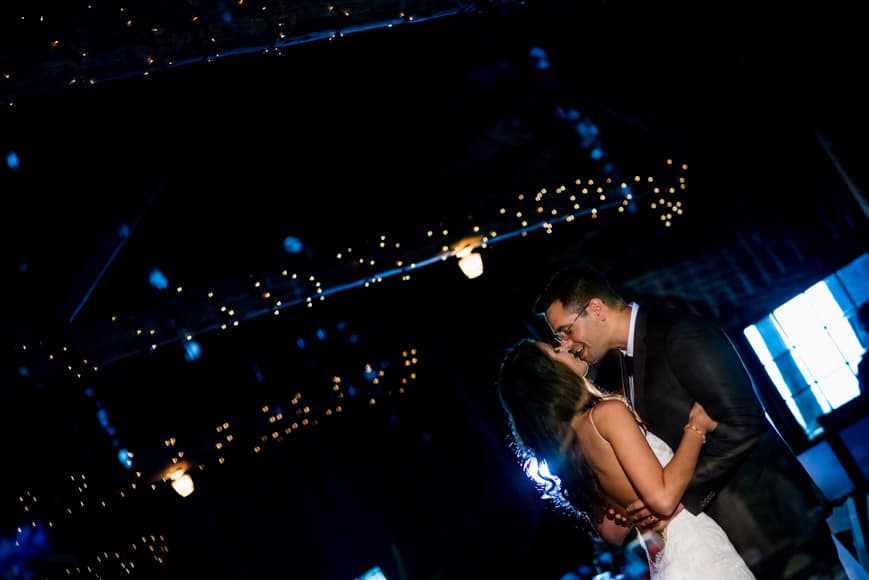 Hey friends and neighbors, young and old, near and far, we are Jo and Jason Marino of Imagine Photography – based right in the outskirts of Las Vegas – in the good ol’ US of A! Most of you have no clue who we are, so a quick introduction is in order:

I’m a former rock musician turned photographer, having developed a keen interest in the medium after meeting my wife JoAnne, a long-time photographer. We have four kids, all in their teens (yes it’s just as easy as you might imagine), we love to travel, eat street food in dodgy alleys in faraway lands, and shopping. All of the shopping.

We specialize in weddings and portraiture, and our style leans toward documentary, but our editorial-style portraits will kick you in the ass. We love light, we love complexity, but more than anything we love great moments captured in a unique way. In short, we are killer wedding photographers for chic, modern couples.

Our gear has been really pared down and curated into a functional, highly organized mess. We recently left Canon for the Nikon D750 and Sony A7ii series cameras, and we both carry one of each.

Our shooting style has definitely dictated the type of gear we now carry, whereas long ago, we just bought what everyone else was buying because if it worked for them, it should work for us. It has taken time to realize that each person needs the tools that best suit their vision, and that is what we have found with our current kit.

Nikon D750 x 2 – The switch from Canon to the Nikon D750 was terrifying for us. Why? Because we had been with canon for our entire careers, which for Jo was a 20 year period. We just never touched anything else. I am happy to report that these little beauties have been a godsend. Missed shots due to focus issues? Gone. Soft images? Gone. Heavy body? Gone. We have a keeper rate well over 95% now, and the files are sharp, have brilliant color tones, the high ISO noise is beautiful (almost film-like when done right), the features such as WiFi and tilt screen (which I actually felt were gimmicky when I learned of them) are actually rather helpful and we use the latter a lot during each wedding, and we have way less body ache from carrying the cameras in our Holdfast Money Maker straps during an 8 hour day. It’s been pure bliss from word go. We were lucky to see the cameras 1st hand at WPPI, and the folks at Nikon were more than happy to show us the features and cool bells and whistles of the bodies.

Sigma 35mm f/1.4 Art – As we developed our style, we realized we were people that wanted to be right in on the action, shooting our weddings in a way that made the viewer feel they were there when the image was captured. That aesthetic lent itself to wide primes, specifically 35mm. You’ll see the Sigma 35mm 1.4 Art on the right, a lens I absolutely adore and use almost exclusively during any wedding. It’s sharp, it’s got beautiful IQ, it never misses, and it is so versatile I can use it from the start of the day to the very end, and I’m never left with a feeling of needing more.

Nikon 85mm f/1.8 – You’ll also see two Nikon 85mm f/1.8 lenses; lightweight, fast, plenty beautiful, and incredibly affordable compared to their more expensive counterparts. We both utilize one of these bad boys for portraits throughout the day, Jo with hers always attached to her Nikon D750, and mine always nearby just in case. We are so happy with these lenses that we simply can’t justify the higher end version. When we were with Canon we utilized the Canon 85mm f/1.2 L II, and it was slow to focus, weighed a ton, and cost as much as several of its 1.8 siblings. With the switch to Nikon, we didn’t want to make that mistake again, so we went with the 1.8 and haven’t looked back.

Nikon 70-200mm f/2.8 VRII – We also have a Nikon 70-200mm 2.8 VRII that we use for our kid’s sporting events, but otherwise it doesn’t see much daylight for weddings. Again, we want to be in on the action and be able to move quickly and without much weight, and a giant lens like that can be intimidating to guests and camera-shy clients.

Sony A7II x 2 – The decision to get the Sony A7II bodies instead of two extra Nikon D750 bodies was more complex. We love mirrorless cameras, for both the small form factor and the transportability. We travel quite a bit, and it’s always nice to be less conspicuous when you’re running around Saigon or a sketchy alley on Skid Row in downtown LA.

The sensor in the Sony A7II is the same sensor as in the Nikon D750 (both produced by Sony), so that made us feel really good with the decision, plus the extra features are similar to the Nikon, giving us a bit of familiarity and expectations even though it’s a completely different camera. These bodies are so unique, so fun to use, and they really help us to be deliberate in our shooting.

Mirrorless cameras aren’t really suited to a run and gun style shooting yet, so they really bolster our creativity as we need to pay attention to our shots and not just spray and pray. The files look fantastic, the ISO performance is great for a mirrorless, and the light weight, high quality body makes us never want to put them down. They travel with us everywhere, even just for fun little road trips.

Sony 55mm f/1.8 – When we purchased the Sony’s, the fast prime lens options were somewhat limited, and as such, we made choices on lenses we felt would be a good building block as we waited for the new 35mm 1.4 and 90mm 2.8 macro (purchasing this summer). We also wanted lenses that would complement our Nikon selections, so I went with the Sony 55mm f/1.8, which I keep on myself during each wedding and use for tighter shots during the ceremony, and the occasional portrait. I’ve always enjoyed the 50mm range, and feel it suits me pretty well. I will, however, be changing over to the new Sony 90mm f/2.8 once it’s released this summer, as it will be my portrait lens, work for the occasional macro for rings, and give me more reach during other parts of the day.

Sony 16-35mm f/4.0 – Jo has the beautiful Sony 16-35mm f/4, a great lens for outdoor shooting and those fun, wide landscape shots with our clients hidden in a corner somewhere. It does struggle in low light, forcing you to shoot at 6400 ISO for almost any indoor shots. Again, we are waiting for the new Sony 35mm f/1.4 to be released, and Jo will add that to her stable as her go to lens during weddings, much like I use my Sigma 35 as my primary lens.

Yongnuo 560IV Flashes – We own eight (yes EIGHT) of these awesome units. We figured showing more than a couple might be redundant. We are huge off-camera-flash users, and it really has become a huge part of our portrait aesthetic. We love light, we love versatility, and we love the built in radios which allow for us to get really creative with groupings and power levels.

We generally have four of these set up in a reception space – and pointed straight at the center of the room – providing hair/rim light to the action, giving lots of depth and interesting look to our reception images. We will both have one on camera for fill during the reception as well. The other two are set aside and ready for use during any portraits throughout the day. Each flash has a built in screen which allows for full control over the other units, so they are hugely convenient when working in a fast paced environment like a wedding reception. To trigger each of these units we bought two Yongnuo 560TX transmitters.

Yongnuo 560TX Transmitters – These fantastic flash controllers have really helped round out our lighting. They have great built-in screens which allow us to see the power and zoom levels for each group, and further allow us to adjust those levels independently for each flash unit in a group. We utilize them at every shoot we do, from sports to portraits, and trash the dress sessions to weddings. They. Just. Work. No misfires, no issues, no worries. It took us a long time to feel comfortable using something other than name-brand flashes and triggers, but Yongnuo has really outdone themselves here, and are quickly making a name for themselves in the industry. We would not hesitate to buy their products again.

MagMod – What can we say about MagMod that most don’t already know? These flash modifiers are genius. Small, lightweight, and so incredibly easy to use, they are attached to four of our flashes and are NEVER removed. We are huge fans of gelling for dramatic color, and with their Creative Gel kit, we can really make some magic happen. We are huge fans of gridded light, and our MagGrids are the one modifier that we use for nearly every single portrait. The company keeps coming up with innovations, and we are excited to see what the future brings.

Hold Fast Money Maker Straps – I had gone through several different straps over the years before I heard about Matt and Hold Fast. I got my custom strap made by Matt and the team after meeting him at WPPI 2014 where I immediately fell in love with the beauty, craftsmanship, and usability of the Money Maker system. I put in an order on the spot, picking up a tan water buffalo strap with custom logo engraving, which arrived to me a few weeks later. I teased Jo about having to use a single, boring camera strap for the next year until we showed up at WPPI 2015 and she stumbled upon the new limited edition glove leather Money Maker in red and white with black powder coated hardware. It’s such a bad ass looking strap, and I was so jealous (still am). Again, Matt and the gang came through big time.

We also utilize various other small tools, a couple of Pelican camera cases for the gear, an assortment of stands and reflectors, clamps and doodads.

These are our tools, the things we use to create art for ourselves, memories for our clients, and hopefully happiness for those that come across our images. They are great tools. But they are tools. We can’t express enough how important it is to find who you are, and find what tools work for you so you can make the best art you can make. Don’t let a lack of tools stifle your creativity, nor let an abundance of tools do the same. Just get out there and make great art.