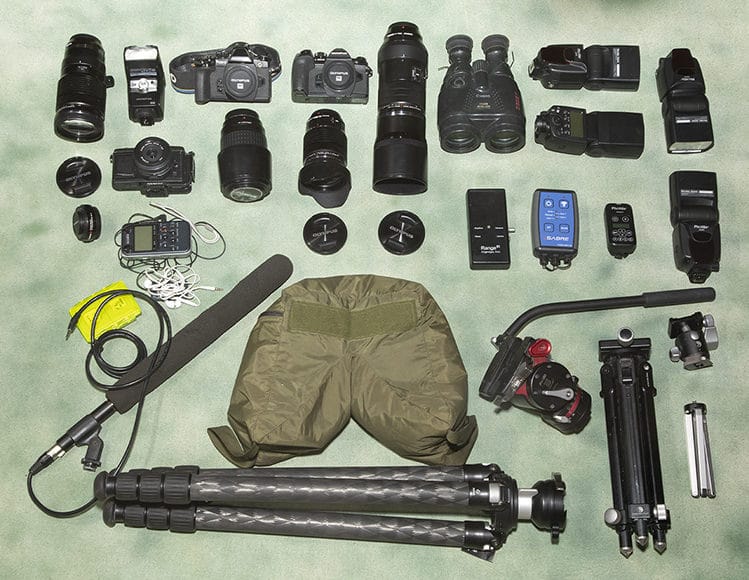 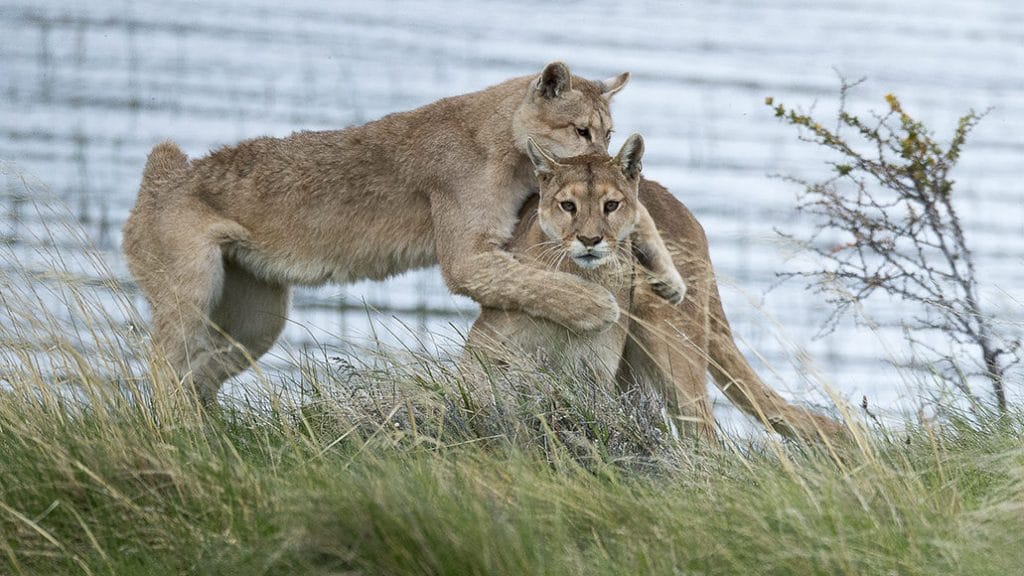 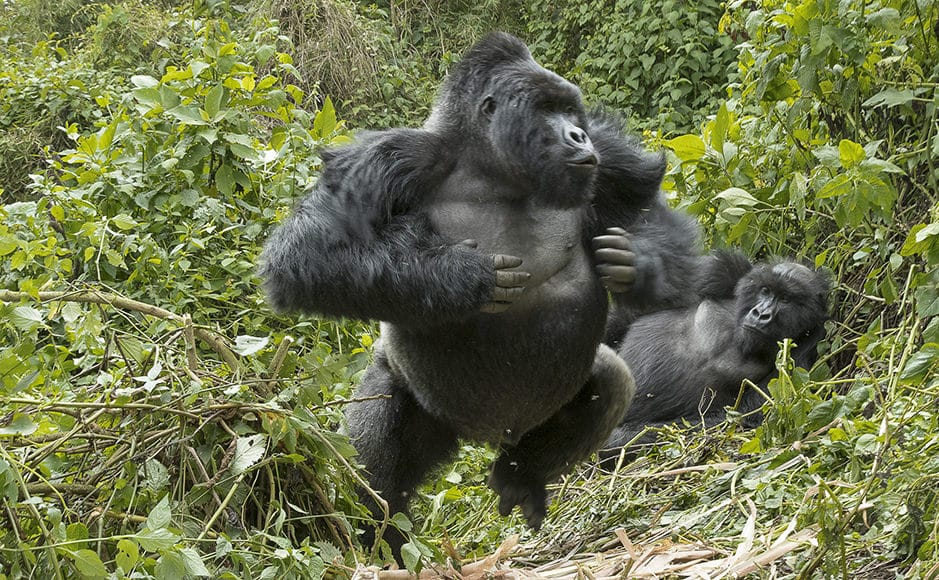 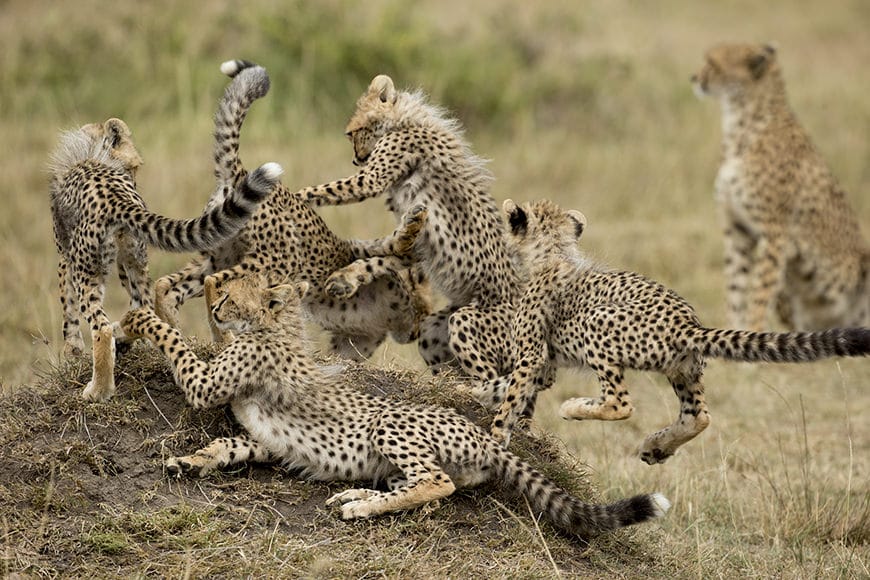 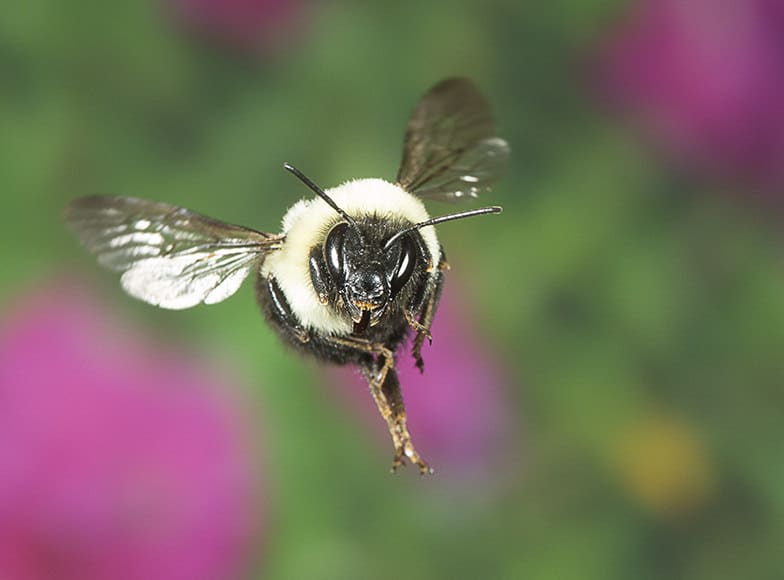 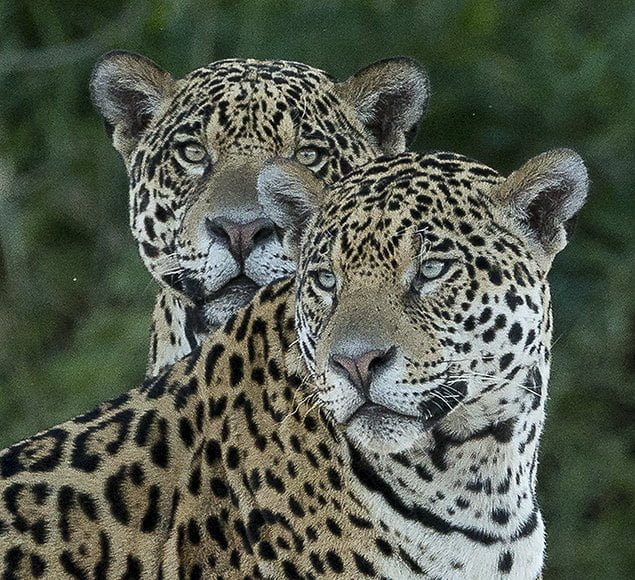 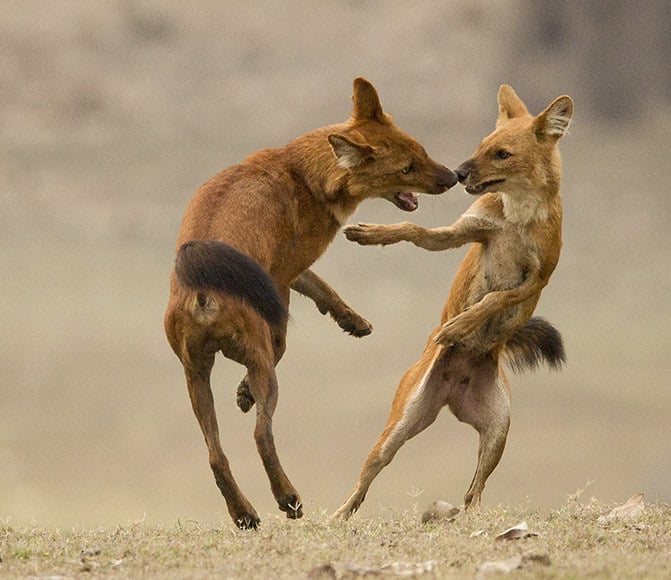 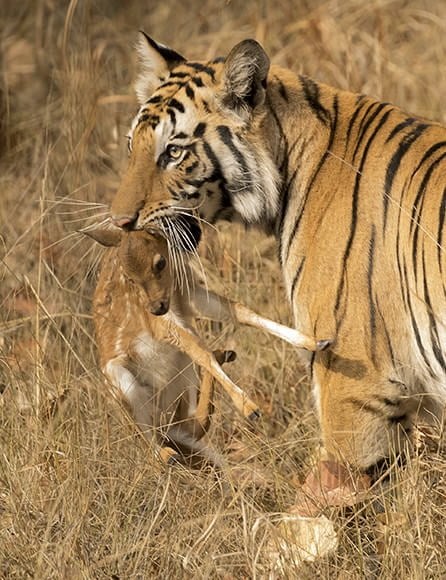 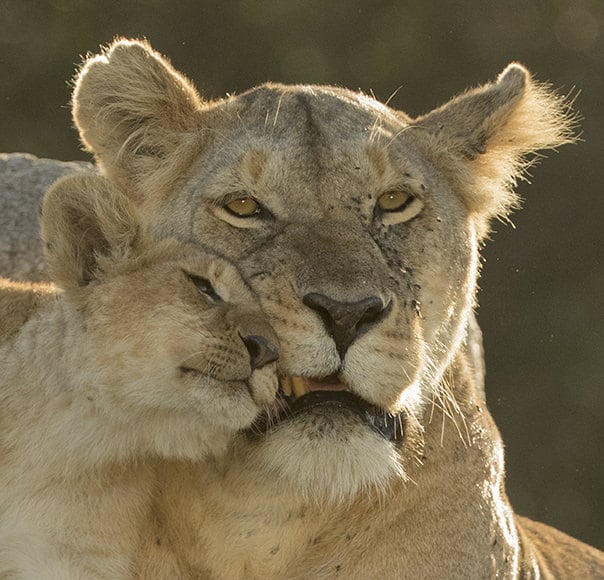 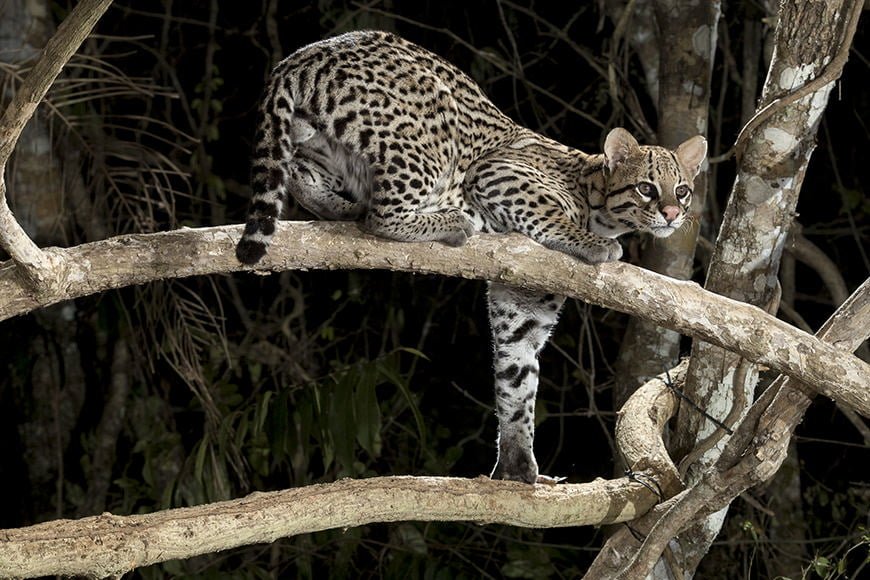 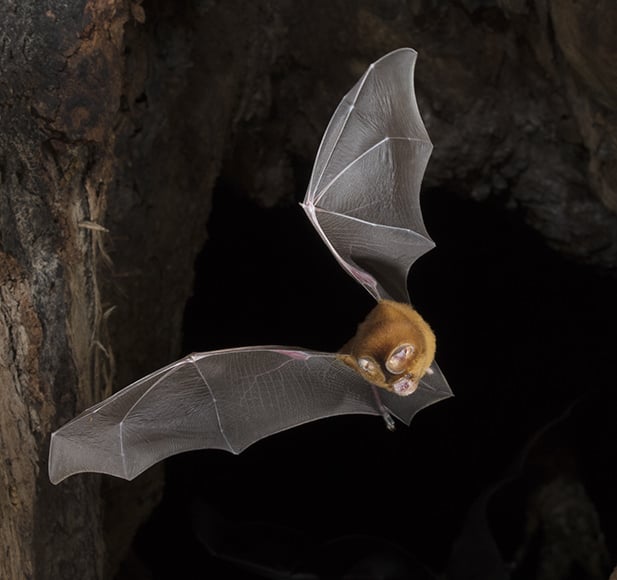 I’ve been a professional photographer for over 35 years, and a semi-pro since I was a high school student. An interest in reptiles and art morphed easily into a passion for photography – I was a better shooter than a painter!

After I got my first camera at age 14, my photo subjects broadened to birds, then mammals, insects, and general nature.

I’ve always been most interested in wildlife behavior, either capturing action or catching a telling moment of portraiture that reveals the personality or the essence of my subjects.

For the last 29 years or so I’ve been photographing and leading our own wildlife-based photo tours with my wife, Mary Ann, who is also an accomplished photographer.

Between the two of us we’ve placed in the prestigious BBC Wildlife Photographer of the Year competitions 15 times, with 3 firsts and several second places – I believe more than any other husband/wife photography team.

With my love of reptiles, amphibians, and later on, owls, I needed to master flash. Among my peers I’m probably best known for my flash photography, particularly high-speed flash and using triggering devices, like the Cognisys Range IR or the Cognisys Sabre.

Virtually all my flash work is done on manual mode, allowing me to dial down to low power ratios for fast flash durations, which is necessary for action. I’ve used plenty of flash systems, from Vivitar to Nikon to Canon, and on manual mode the system didn’t matter.

I’ve settled on the Phottix Juno

manual flashes, which are inexpensive, and wireless via a radio trigger. I use a Phottix Ares II

transmitter to fire the flashes, which are usually dialed down to 1/8th or 1/16th power.

I’ve been a Canon shooter for most of my professional life, although I switched to Nikon when Canon’s AF EOS system was first introduced, but as Canon’s IS was perfected, we went back to Canon.

Also, in my Canon arsenal I used the 60

has become my go-to lens over the last few years.

Recently, however, I experimented with the Olympus 4/3rds system, and after doing so, I decided to switch from Canon to Olympus. Presently I’m using their ‘flag ship’ model, the Olympus OM-D E-M1 Mark II

, which has a number of features that the previous, Mark I

For bird photography, the Mark II

is truly a game-changer, particularly because of the ‘ProCapture’ feature where the camera continuously records images, rewriting over images in a loop, until the moment the shutter is fully depressed. Then, that shot, and the previous 14 images, is recorded, so camera lag-time or slow human reflexes are negated.

While ProCapture and the frame-rate, 20fps in AF, was significant, the greatest motivating factor in our changing systems was the size and weight of the 4/3rds system. Doing as much international travel as my wife and I do, having two kits that fit inside one roll-on luggage case was extremely compelling.

I did a blind test with my Canon, Tamron, and Olympus lenses, and the Olympus Zuiko 300mm

, which has an effective 600mm in the 4/3rds system, consistently proved the sharpest of the lot.

While still testing out the Olympus gear, we went to Rwanda for mountain gorillas, where Mary Ann and I completed our 106th trek. I shot mostly 4K video and Mary shot stills.

On our previous 101 treks I used two Canon 1D X

This time, both of us used just one lens, the Olympus Zuiko 12-100mm

(providing the equivalent of a full-frame 24-200mm), which not only covered all our shooting but also proved extremely practical as we often wormed our way through bamboo, vines, and other jungle clutter.

, was a dream, and with its weather-proof seals we didn’t worry about rain, and we didn’t even bother to carry camera rain covers for protection.

On that shoot, we used Really Right Stuff monopods, with monopod heads. If you use a monopod, invest in a monopod head – ballheads can be extremely problematic. When not shooting off a monopod, Mary and I use RRS tripods with an RRS videohead mounted on mine, and either a Wimberley gimbal head

or an RRS ballhead

on Mary’s. Several of our clients were using Sirui tripods

and heads, and were happy with that choice as well.

We are on the road, photographing and leading photo tours around 25-30 weeks of the year, covering at least four continents in any given year. Since we started using the Olympus system we’ve been in Yellowstone, Rwanda, Kenya, and, on our latest, Torres del Paine, Chile, where we worked on pumas, or mountain lions.

gave us complete coverage from full-frame DSLR equivalents of 24 to 840mm.

We use Op-tech camera straps

with quick-release snaps, so we could remove the neck strap when needed, and in the Andes Mountains we didn’t need anything extra to catch the constant, powerful winds.

, and the light weight of the Olympus system was especially appreciated as we searched for, or followed, pumas. It was on that trip that we decided to make the switch.

In my Shokit image is the gear I’ll normally take afield when traveling in most countries. Cameras and lenses go in a ThinkTank backpack

, while the other gear is stored in a duffle bag.

I use a Really Right Stuff videohead and tripod, and if I’m doing camera-trap work I’ll use an RRS Groundpod or mini tripod, supporting either the camera or a RangeIR or Sabre. In camera-trap work I normally use four Phottix flashes

on manual mode, triggered via a Phottix radio transmitter

, earphones, and a digital tape recorder. For shooting from a vehicle I use a MolarBag by Vertex.