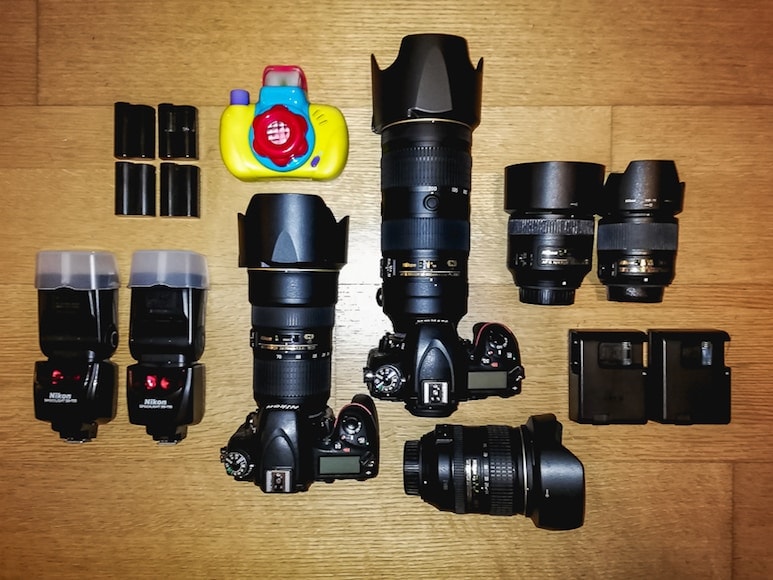 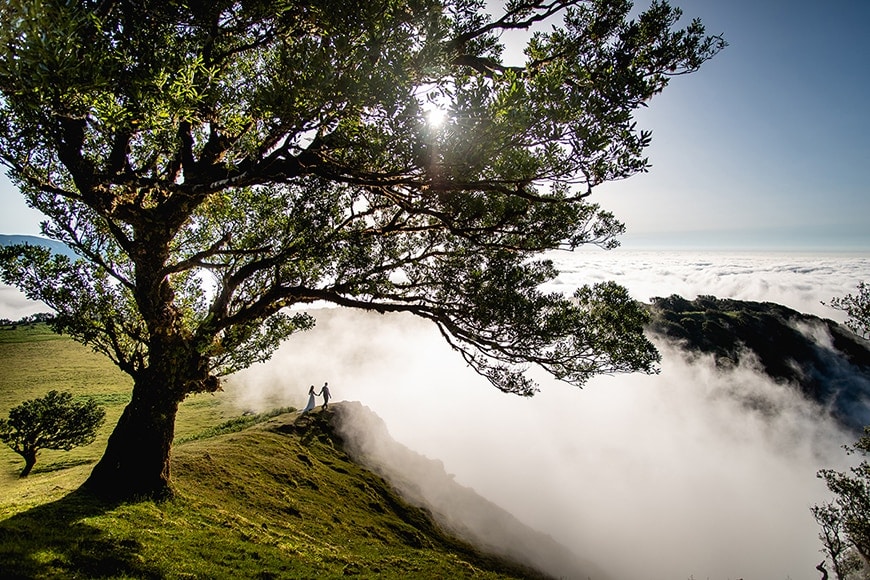 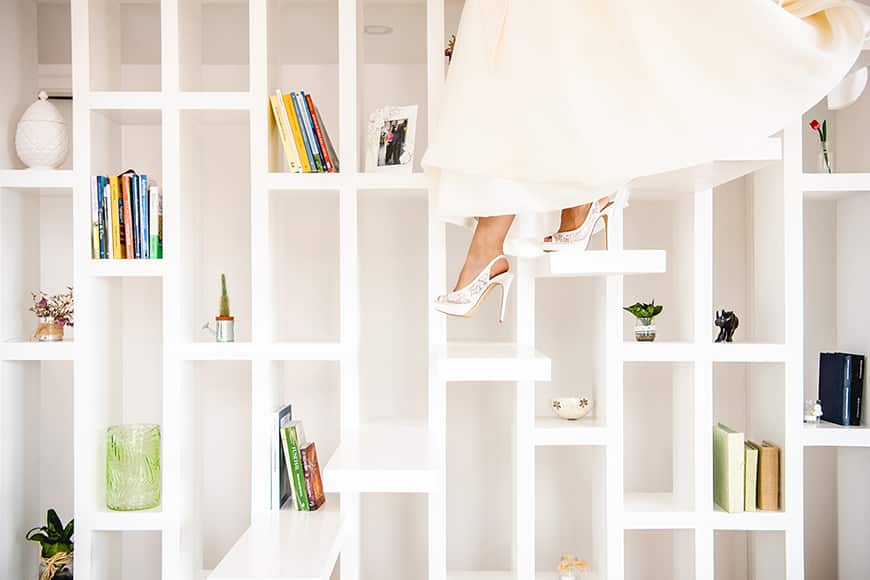 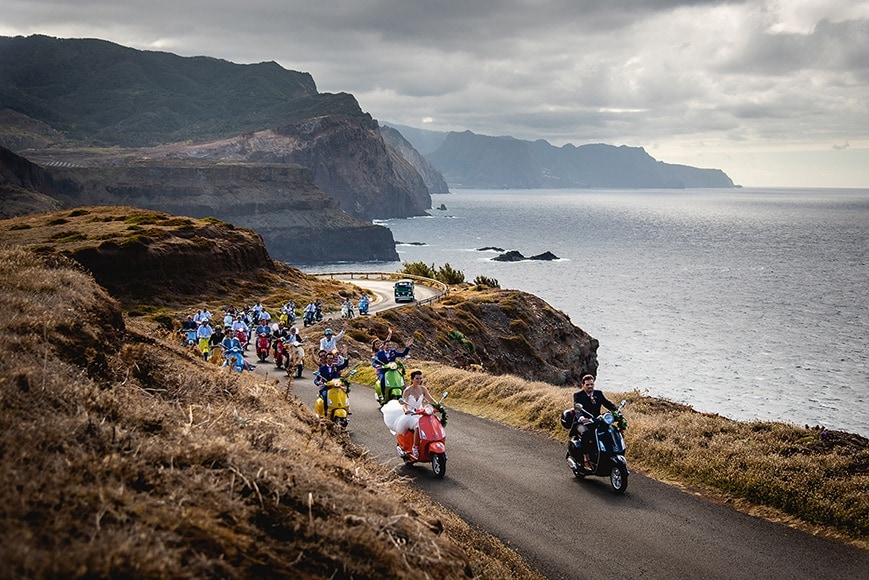 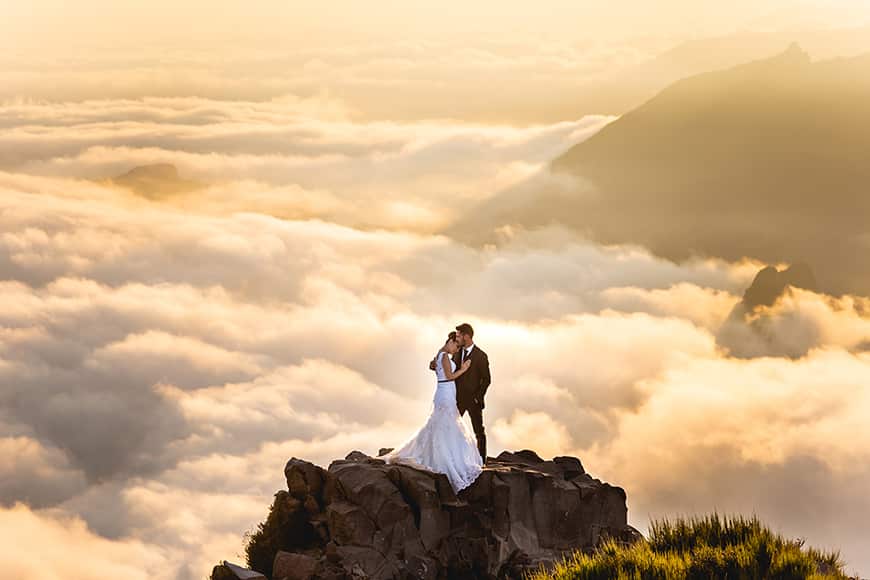 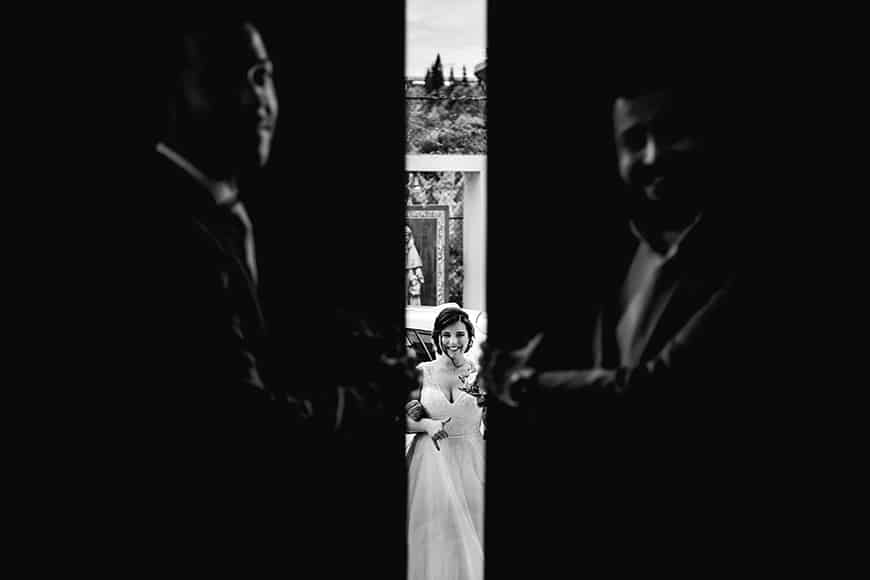 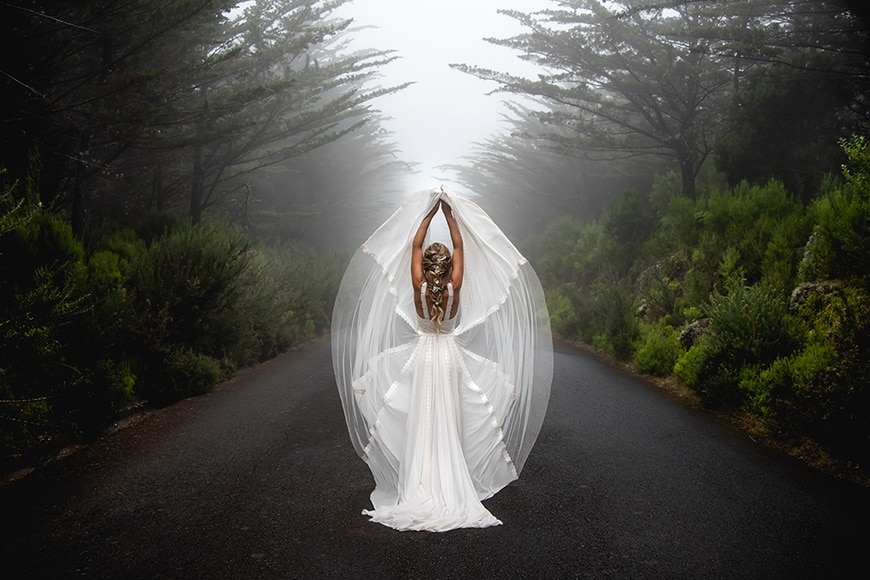 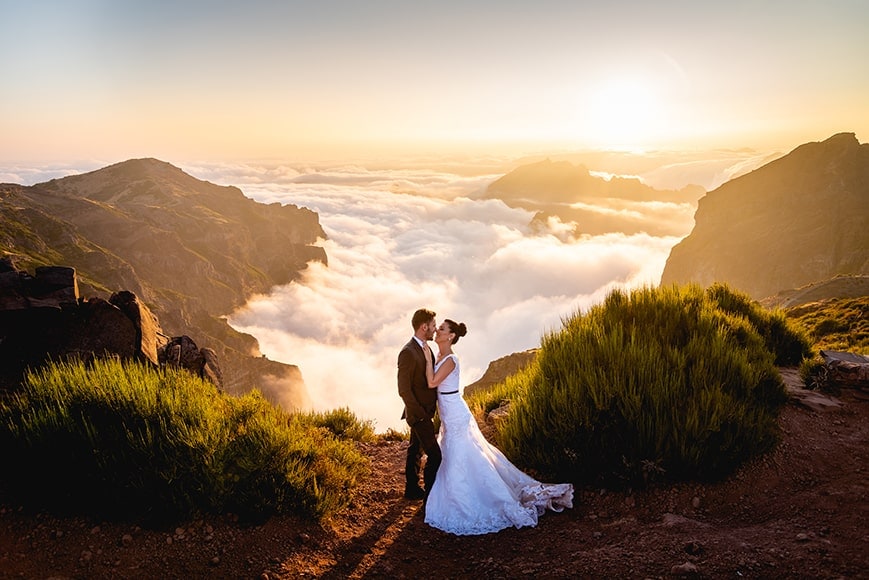 I was born in the pearl of the Atlantic Ocean which is one of the many aliases used for Madeira Island, Portugal, where I presently live with my little baby girl and do the most of my work.

I originally graduated in psychology, but I also had training in landscape photography, which explains my focus on emotions but also natural sceneries.

I owned my first camera when I was 12 years old.  The first time I photographed a wedding was 23 years later at the age of 35.  That was about five years ago.

I am currently one of the most internationally awarded Portuguese wedding photographers. I rank number one in MyWed for Portugal and number 99 in the world ranking, having won Photo of The Year Award at the MyWed Awards in 2018.

I have also won several other awards by Fearless, ISPWP, WPJA, and This Is Reportage.

I am a Nikon kind of guy. All my gear is Nikon which enables me to take advantage of all of Nikon’s best features, especially when it comes to focus.

I fell in love with the brand five years ago for their great raw files, high dynamic range, colour reproduction, fast and accurate focus, and great ISO sensitivity.

I started with prime lenses, mainly for their low cost and high value in terms of quality. In the early days as a wedding photographer I paired a 35mm and an 85mm in each camera.

The truth is, this was a cheaper combination, but it helped me be more creative, move more, and find better angles. The downside was the fact that sometimes, when you are using fixed lenses and you don’t have space or time to move, you end up loosing important shots for your clients.

My advice, in terms of gear, would be to start with fixed lenses and a few years later start using professional grade zoom lenses.

2x Nikon D750:  I chose this camera mainly due to her reputation as being a great wedding camera. I read somewhere that the D750 was the queen of wedding cameras a few years ago.

I also chose it because I was already working with the D5200 and D7000, and I thought the learning curve would be faster and the full-frame sensor, better ISO sensitivity, and focusing would be a very good upgrade… and so it was.

I fell in love with this camera’s raw files, which are still one of the best out there. Besides that, the truth is, I hardly miss a shot or get an unfocused photo. She is fast, accurate, and light, comparing to other semi or professional DSLR’s out there.

Nikon 35mm f/1.8:  I felt the need really early to add a lens to my bag that would reproduce the normal human view. I started with a 50mm, but I soon realized it wasn’t the best option for small spaces and exchanged it for the 35mm. Nowadays, this lens is still in my bag for redundancy purposes.

Nikon 85mm f/1.8:  Like the 35mm, this lens is presently a redundancy in my bag in the event the 70-200mm fails and I still need a good portrait lens, but I still use it for portrait half-body shots. It has a good, smooth bokeh and it’s sharp enough at any aperture.

Nikon 24-70mm f/2.8:  This is my work mule. It’s my go-to lens, most of the time. Her focal distances range is ideal for weddings, especially for the documentary style photos.

For me, the documentary style is a sort of photojournalism made with proximity to the people being photographed and this lens is the best option for that. I also take a lot of landscape photos during photoshoots, and she is also great for that.

Nikon 24-120mm f/4:  This is my serve-all-purposes lens and the one I use when I have to travel light or on vacations. It used to be my work mule in weddings before I evolved to the 24-70mm. The VR is really great, and I would still use it at weddings because it’s versatile and sharper than you would expect.

Nikon 70-200mm f/2.8:  The magic lens. It’s my go-to lens when I need to keep some distance from the event, when I need candid shots, or pure photojournalist style photos. The bokeh is great and the VR has no par, enabling me to photograph at 1/20 without a tripod, even at higher focal distances.

I only use speedlights for party and dancing shots or when the ambient light isn’t enough even with 4000 ISO, or when you have low and poor light, especially the kind that causes shadows in people’s faces.

Lowepro Pro Runner 450 AW II:  Enables me to pack a camera and two lenses, which I usually use for short jobs or walks.

Be safe, be redundant! If you photograph weddings, there is no room for mistakes or equipment failures. 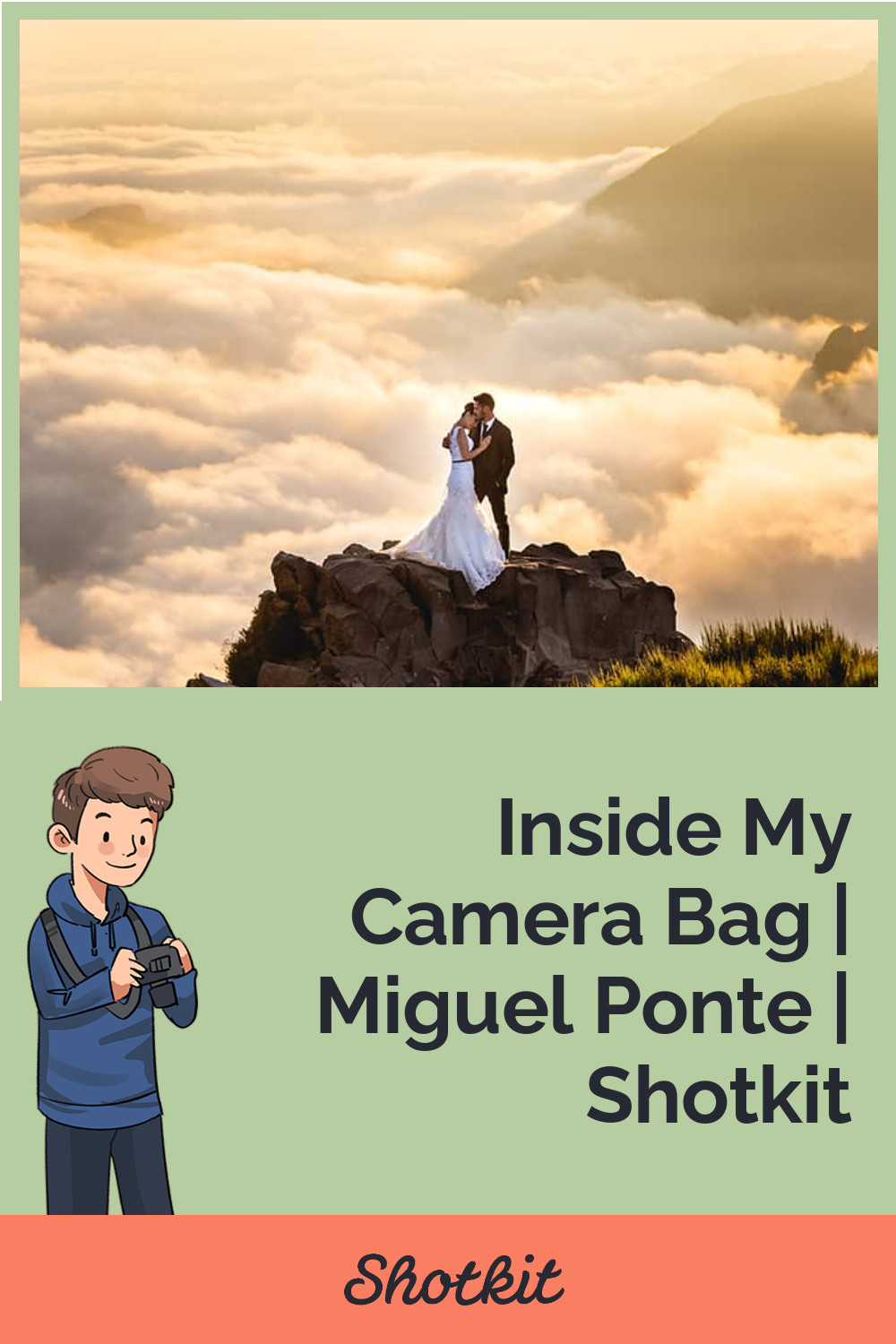