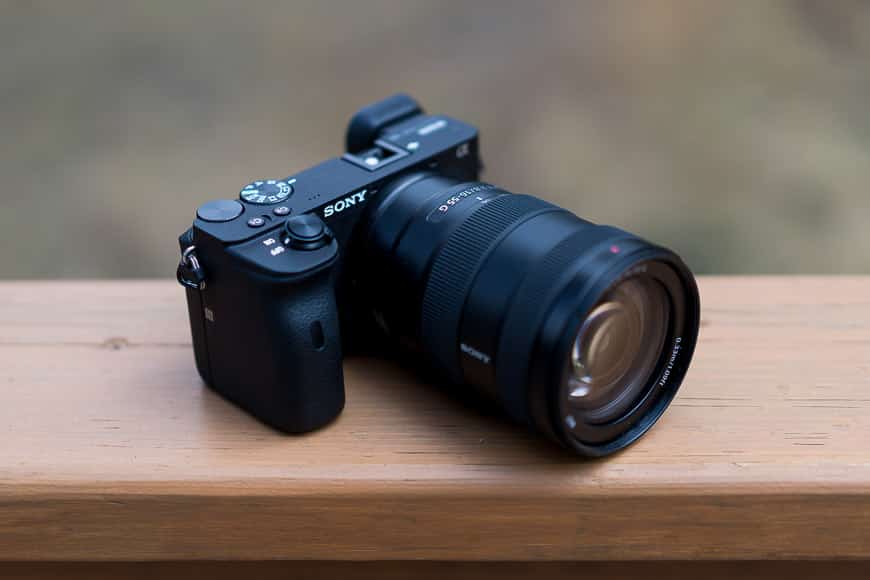 With the release of the Sony a6600, my interest in APS-C sensor cameras has been re-ignited! Sony has been focusing on their full frame camera lineup like the A7 series, but has finally released a worthy contender in the crop sensor camera category.

The Sony a6600 is an excellent all-around camera with some big improvements over past versions, mainly the new Z-series battery.

This is an excellent camera for anyone looking for the best performance in the smallest package.

As an adventure photographer who shoots mountain sports, outdoor lifestyle, and travel imagery, this camera is very appealing because its compact size allows me to go faster/lighter.

It can also take advantage of some of the best Sony lenses that match its size perfectly.

Read on to to get more details on specific features of the Sony a6600 and why I think it’s the best compact camera on the market in 2022!

The Sony a6600 offers a great combination of compact size and power.

The Sony a6600 improved on previous designs and offers the latest in build quality. Its increased grip size and simplification have brought large improvements in handling and durability.

One of the biggest improvements on the the Sony a6600 is the expanded battery life. It now shares the same batteries as the a7 series cameras, making it much more likely to last an entire day of shooting – the Z-Batteries last A LONG TIME!

The Sony a6600 appears very similar to previous generations but definitely has some user friendly improvements. More on those changes below in the ergonomics and handling category.

It would have been awesome to see a new sensor in this camera, but I guess we’ll have to wait for the next generation. The a6500 sensor (same as a6600) is still very capable and delivers excellent quality – see my Sony a6500 review for more on that.

Despite using the older sensor, this camera does have a new processor that maximizes the image quality out of the original sensor. 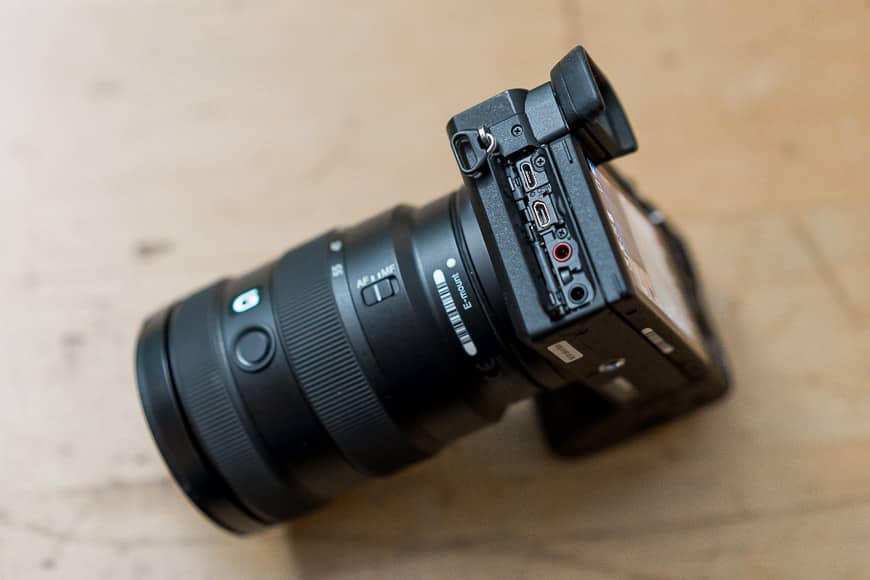 As with other Sony mirrorless cameras, the a6600 can be charged via micro USB. There’s also an external mic input.

A defining factor in how much I enjoy a camera is ease of use. The Sony a6600 delivers some substantial improvements in this category.

Namely, the addition of a third custom button was a welcome improvement. Its placement allows easy access to a plethora of customizable options.

I’ve always loved how you can really make things your own with the custom buttons on Sony cameras.

I found this third button best suited to switching the rear dial from controlling shutter speed to controlling aperture. Set up this way, you can quickly control all three exposure settings: aperture, shutter speed, and iso (set to control wheel).

It can be a hindrance to not have three dials but the Sony a6600 makes a good compromise by allowing the rear wheel to be both shutter speed and aperture, along with that switchable C3 button customization.

The removal of the pop-up flash on the Sony a6600 was a no-brainer for me. The low light performance is imrpessive enough to make the wimpy on camera flash on the a6500 largely redundant.

Another popular feature added to the a6600 is the 180 degree tilt-able flip screen (aka selfie screen). It allows you to easily frame up selfies and see what you get, instead of hitting the shutter a few times and hoping it works out!

Other minor upgrades that I appreciate are slightly more tactile buttons and a deeper grip (due to larger battery) that make you less likely to drop the camera.

Sony APS-C cameras have always felt a little small in my hands but the a6600 is definitely the most comfortable and easiest to use so far! 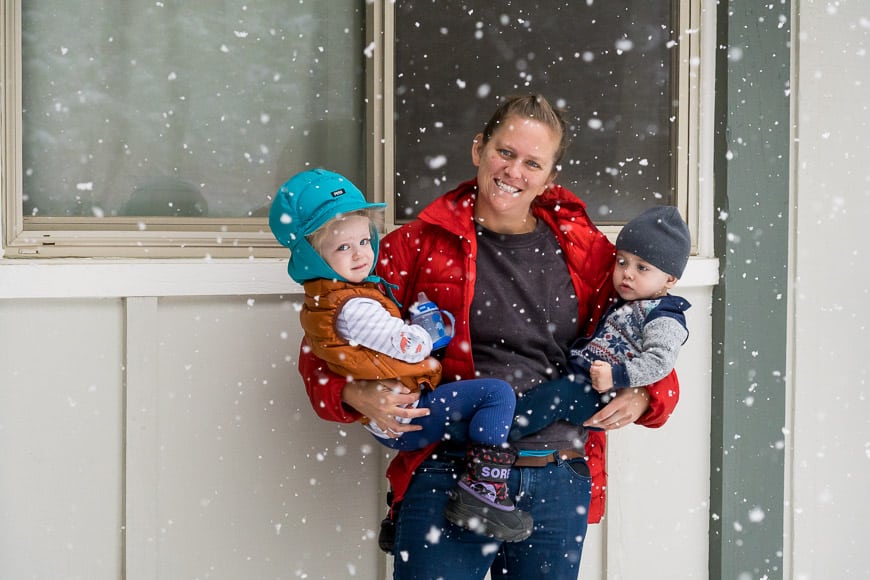 Focus speed and performance is one of my top priorities as an action sports photographer and the Sony a6600 delivers some amazing new features in this area.

A really useful feature is the addition of a kind of hybrid AF function that’s in-between Flexible Spot and Tracking. It allows you to use a small box to lock on to your subject and while holding down the af-on button, it will continue to track that object until you release the focus.

This feature is something I have been waiting for in cameras for almost a decade. It allows you to track something like a dog running around with ease! You just select what you want to track and it locks on with incredible accuracy.

In other focus modes, the focus was very snappy and I can tell that Sony has put a lot of work into their AF system on the a6600.

Boasting speeds of up to 0.02 seconds to lock focus, it felt almost instant in most conditions.

In low light, the focus was a bit slower but still very functional. I never felt like I missed a shot because the cameras was struggling to focus. This is especially true if you use a faster lens.

Overall the auto focus was incredibly satisfying to work with! 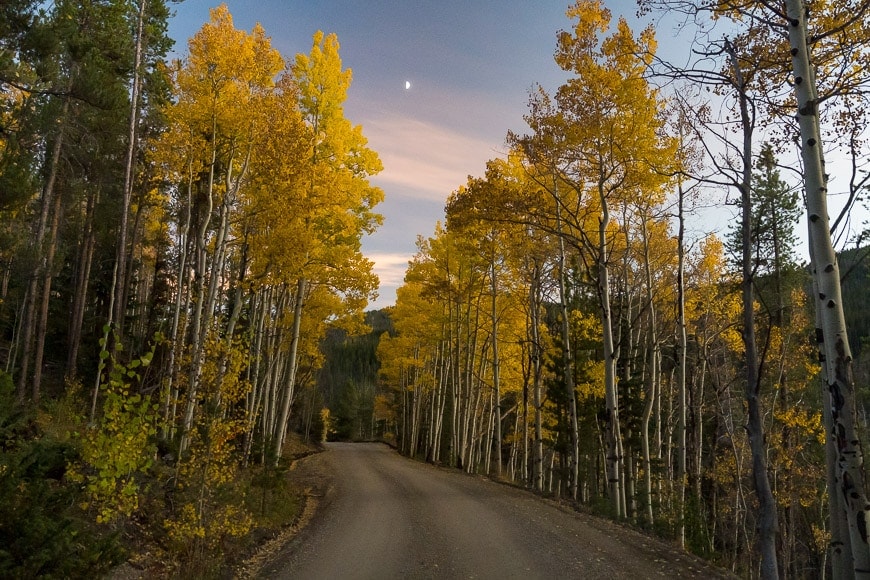 Because it has the same sensor as the Sony a6500, the Sony a6600 handles low light nicely. I was hoping for a new sensor and some improvements in performance here but I guess you can’t have it all.

I found the Sony 16-55mm f/2.8 lens to be a great companion to the a6600, allowing me to shoot in almost any conditions besides the absolute darkest scenes.

The max ISO I felt comfortable shooting at was 6400 but if you wanted to push things, I’m sure this camera could produce a mostly usable file at ISO 12800.

If low light performance is very important to you, I’d suggest checking out some of the fast prime lenses available for this camera like the Sony 24mm f/1.8.

Using a fast prime will allow you to get the most out of this camera in low light. 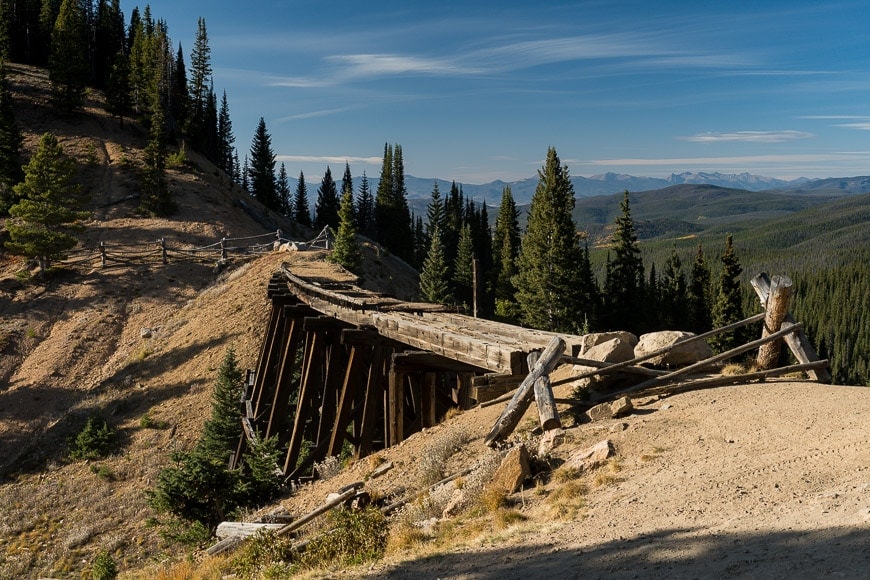 The image quality of the Sony a6600 is impressive for an APS-C camera! It produces incredibly sharp, color accurate and high dynamic range images.

A big change from the previous versions of this series of camera is the color science. The a6600 appears to be on par with the a7III in terms of color accuracy.

I felt that the a6500 and a7II both had a bit of a green tone and didn’t render skin tones as nicely as other camera manufacturers (specifically Canon). This has been improved with the a6600.

The Sony a6600 now creates beautiful images of any scene regardless of the light. I also found this very helpful when using the a6600 as a backup camera because my images matched the color of my main body, the Sony a7III.

Similar to the a6500, the a6600 also offers incredible dynamic range. It is amazing to have such a powerhouse of a camera in such a small package. The images had so much detail even in the most contrasty midday light.

The RAW files from the a6600 were very sharp and crisp. I found that they edited incredibly well, even better than I expected from a crop sensor camera. 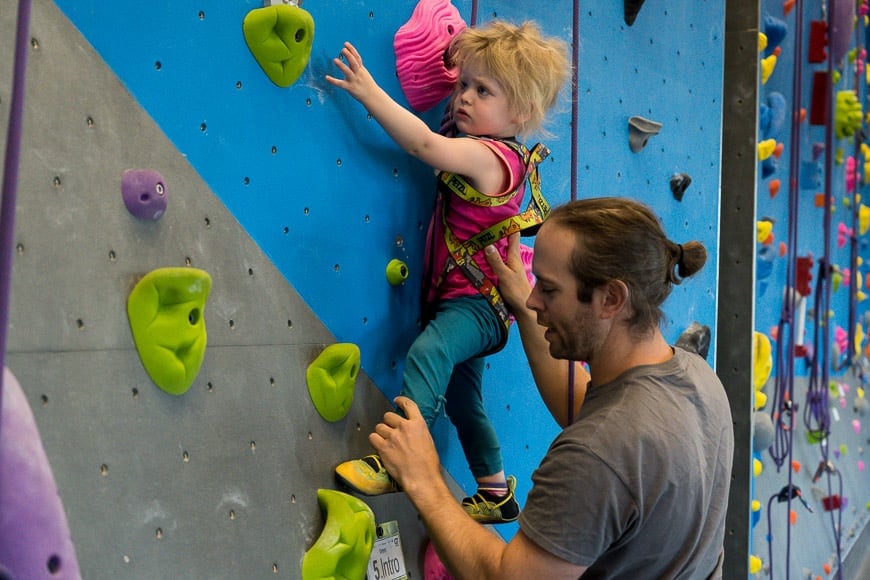 The Sony a6600 is a workhorse! It delivers so many amazing features packed into a tiny body.

I love that it can shoot 11 fps and buffer up to 46 RAW files at 14bit output. It is plenty fast enough and capable at shooting almost any sport or subject.

What is particularly impressive is that it can shoot that fast while maintaining continuous auto focus and auto exposure!

The only thing that slowed me down a bit while using this camera was not having three dedicated wheels for adjusting exposure settings.

There is a workaround for this using the C3 custom button (as mentioned above), but it is just not as fast as having three dials like the A7 series cameras.

Despite that disadvantage, this camera is completely capable as a backup to a full frame primary camera, or even as a more compact option for light/fast activities where minimum size/weight is critical. 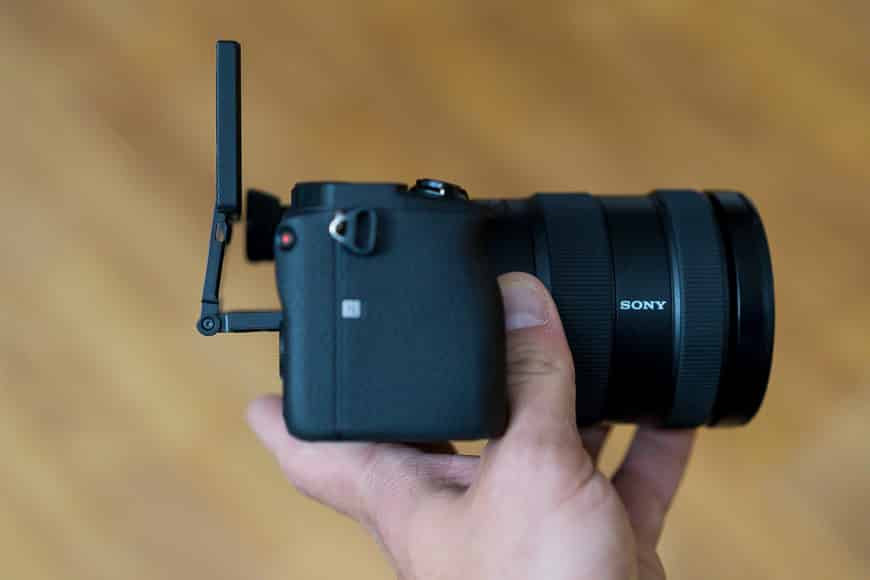 The front-facing screen is a great feature for vlogging!

There are so many standout and useful features on all the Sony Mirrorless cameras.

The Sony a6600 in particular is especially good at delivering top of the line features in a compact body. I really enjoyed the tracking auto focus and the eye auto focus. Both of these features make getting sharp images a non-issue.

Additionally, I liked the wifi control and transfer of images. This feature allows you to quickly share images with clients or on social media.

As I mentioned previously, having the z-battery cross compatibility with the a7 series cameras was also a key feature.

Another feature to note if you’re a video shooter is the inclusion of a headphone jack to monitor audio. This addition is very helpful in verifying sound quality. 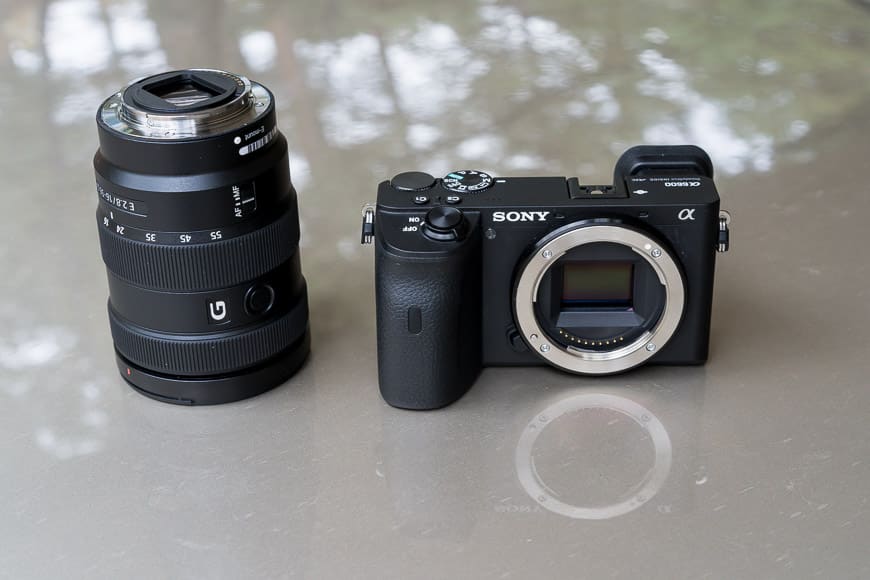 In terms of value, the Sony a6600 is off the charts. It delivers so many pro-level features in an inexpensive body! See the latest price here.

When shopping for a new camera, the Sony a6600 is one of the best value compact mirrorless cameras on the market here in 2022. It outpaces other offerings in terms of image quality, autofocus speed, dynamic range and so many other features.

Additionally, there are a ton of lens offerings that match the value this camera offers.

Sony has been building their lineup of APS-C mirrorless lenses for years so there are a ton of great options.

If you want a compact but powerful camera, I strongly encourage you to check out the Sony a6600.

The bottom line is the Sony a6600 is one of the best APS-C sensor cameras on the market. It offers great value for money and a ton of features in a very compact & lightweight design.

I will be keeping this camera as the best option for activities when small & light is critical.

I also plan on using this camera as a viable backup camera capable of performing in the most demanding conditions.

It has incredible auto focus speed & tracking, superb battery life, and amazing image quality (especially dynamic range). I think the only thing it can’t do quite as well as more expensive offerings is keep up with low light performance.

If you want a camera suited to traveling and documenting your life, the Sony a6600 is a great option! 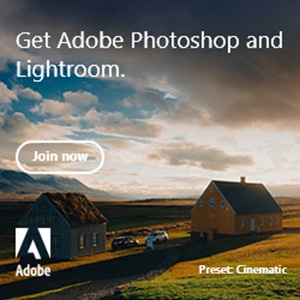