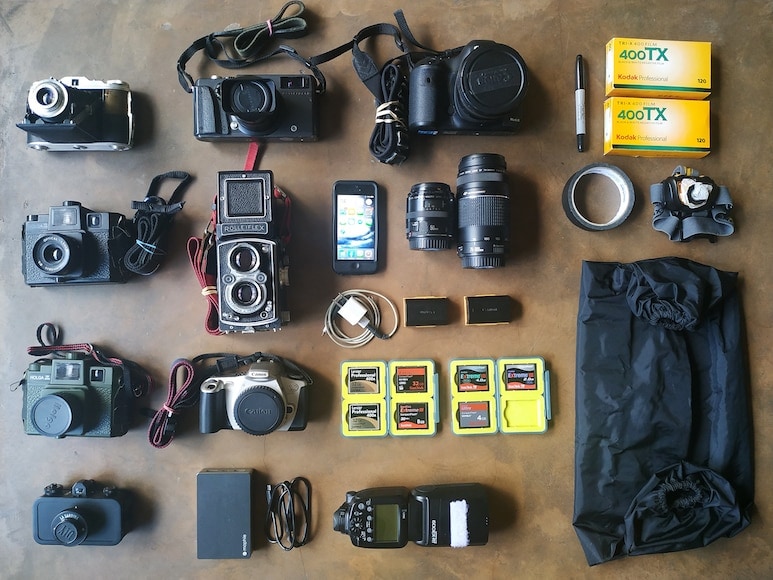 I am an Italian photographer based between Bogota and New York where, in 2010, I graduated in Documentary Photography and Photojournalism from the International Center of Photography (ICP).

Originally, I started studying biology in Rome with the idea to work on environmental issues, but I rapidly got bored with so many things to memorize. So, I switched to Literature and Philosophy and ended up studying History and Anthropology.

After my graduation, I got a scholarship in Colombia to pursue a PhD in Anthropology by studying an indigenous community on the border with Ecuador.

However, at that time, March 2000, there was an armed strike organized by the FARC (the leftist guerrillas) in the south of Colombia and the university didn’t allow me to travel.

So, instead of doing a PhD in Anthropology, I spent two years in the darkroom at the Universidad de Los Andes in Bogota. Since then, I’ve never stopped taking photographs. Many people who are familiar with my photographs say that is quite obvious that I am an anthropologist.

There are subjects that interest me – sexual orientation, religion, or how people relate to death – that are really connected to my past as an anthropologist and to my personal life.

I spent almost ten years in Colombia but one day I just felt overwhelmed by the chaos, the total lack of rules, the impunity, the double moral of many institutions, the incapacity of the government to ensure basic rights to its people, and I understood it was time to move.

The country didn’t change since my arrival in 2000, but I couldn’t stand it any longer. I left everything behind and invested all my savings challenging myself to go back to school at 38 years old to pursue a diploma at the International Center of Photography in New York.

I love black and white analogue photography (guide) and I enjoy spending hours developing films or printing in the darkroom. Analogue photography still has a magic that I don’t find in the digital one. In the past ten years, I shot most of my street photography using a Holga camera and a panoramic Hasselblad XPan.

I like analogue photography because, in some way, it slows me down and gives me the time to think about what I am doing. However, I honestly don’t think the medium matters. What matters is if we still have something to say and if we have a peculiar and original way to say it.

I think too much debate is about the medium and too little about what and how to say things.

I specially love to use the Holga when I am on the streets in Colombia. The country is not a safe one and it is quite possible to be a victim of an assault. Having a cheap, light camera makes things much easier. When I have more security, I love to shoot with the panoramic Hasselblad Xpan.

I use Kodak TriX400 film that I push to 1600 Iso when I work indoors as I did in the ‘NY prays’ project when I photographed fourteen religious communities in New York City.

The work was done using a Canon Eos 300 with a 50mm macro lens that is the one I generally use also when I shoot digitally with my Canon 5D Mark III. I love my Canon 50mm f/1.4 macro lens because it pushes me to question, all the time, where I stand and to move according to the situation.

I never use artificial lights when I shoot film, but sometimes I use a flash for my indoor digital shots that are commissions. Never for my personal work where I prefer to take advantage of available light and use it as an extra layer in the frame.

The only time I used a tripod in my personal work was for the series ‘Nostalgia in Blue’ that was produced in a camera obscura I built in a chalet overlooking the Mediterranean in the North of Italy. Otherwise, I find that tripod limits a lot my mobility and imagination.

I generally use a Kata Kangaroo that allows me to carry more than one camera, the film, my phone and its charger.

I don’t like ‘standard’ photo bags that you carry on one side of the body because I find that they hurt my back and limit my mobility during the shoot (especially on the streets where I also find they are quite easy to steal).

I generally use Adobe Lightroom to archive and process my photographs (the analogue ones that I scan with an Imacon V, and the digital ones). Sometimes I use Adobe Photoshop to remove dust from the negatives that I scan. I have a MacBook Pro (13-inch, 2017, Two Thunderbolt 3 ports).

I usually pack sunscreen if I will be on the streets, cashews or any kind of nuts, some candy, a couple of gluten-free bars, and a bottle of water.

Most of my creative process is quite unconscious, especially when I am on the streets of a new place/city or in a new community and I respond to it in an emotional and visual rather than an intellectual way.

I think in the last ten years I developed a more personal, maybe ‘cinematic’ style, by working a lot, developing my rolls of film, and scanning them in order to learn from my mistakes. Aristotle used to say that: “We are what we repeatedly do. Excellence, therefore, is not an act, but a habit.”

I associate being a photographer with being an athlete who trains every day aiming to get better, and for me, the training could also be without a camera, just learning to look at things and light in order to define and discover my own vision.

I don’t have a formula; I just try to evoke things rather than to show them.