When it comes to camera tripods, Manfrotto has a certain appeal that draws photographers and videographers from all over.

Not only are Manfrotto products tough and sturdy, they’re also very reliable and can keep on performing for decades if given the right care.The Manfrotto 055 tripod is no exception.

This hugely popular tripod is more than adequate for professional applications and is also a good investment for serious amateurs who value quality equipment.

So, someone who is in the market for something that’s rock steady, reliable and pretty much future-proof, should have this on their list.

I own a couple of DSLR tripods but the Manfrotto 055 is my go to. I’ve been using it for quite a while now and I can say that it’s something I wouldn’t want to be without.

Over time, I’ve come to trust it’s ability to keep my gear safe and I continue to appreciate the quality it contributes to my work. 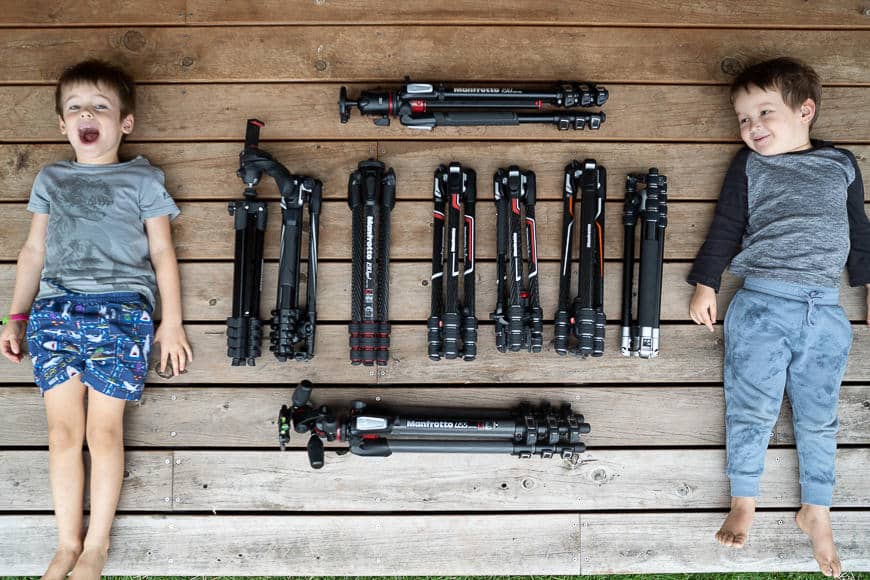 Testing the Manfrotto 055 (bottom) against other models.

I’ve written a guide on Carbon fiber vs aluminum tripods in the past, so I won’t go into all the details here, but here’s a quick summary that relates to this particular model:

If you can afford the additional cost of the Manfrotto 055 (4 leg joint) Carbon Fiber model, I highly recommend it.

Aside from the more obvious weight/strength differences of carbon fiber in general, there’s something more pleasurable and tactile in handling a carbon fiber tripod, particularly one as well-made as the Manfrotto 055.

Retracting the legs gives a hugely satisfying hollow *clunk* sound that’s hard to put in words, but embarrassingly fun to do over and over – in short, this simple auditory feedback makes it a pleasure to use.

Then there’s the ‘warmer’ feel of carbon fiber to the touch, and finally the look of it. I admit that all these things are relatively minor in the grand scheme of a device whose main purpose is to hold your camera, but it all adds up to more pleasurable experience.

If your wallet can handle it, trust me – go carbon fiber with the Manfrotto 055. 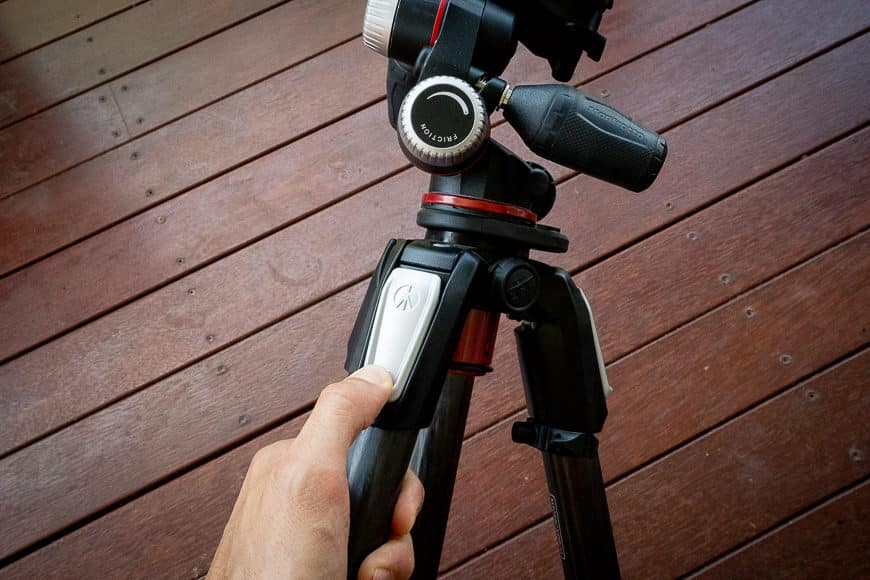 Everything on the Manfrotto 055 feels solid and well-built.

The Manfrotto 055 is available in aluminum or carbon fiber, and as can be expected from the brand, both versions have a premium feel to them.

These tripods are neither shaky, fragile nor flimsy so they perform well no matter where they’re used.

The legs of the 055 in particular, inspire a lot of confidence as even the thinnest segments feel very solid.

However, if you don’t need to go all the way up, you should leave the bottom section tucked in to ensure that vibrations are kept to a minimum.

The Manfrotto 055 doesn’t come with a head when you purchase it, but the 3/8″ screw on the center column is universal and will fit just about any ball and fluid head available. 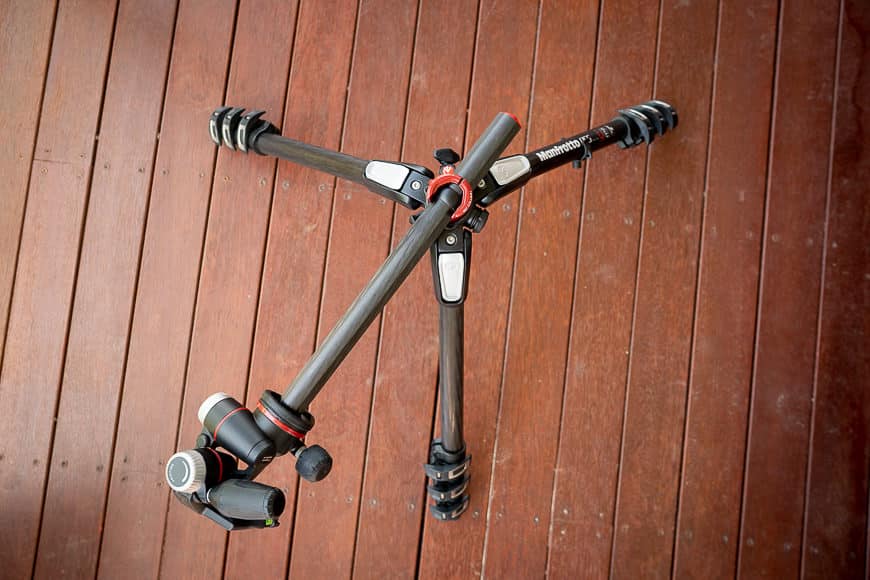 With the legs splayed and the centre column at 90 degrees, macro or ‘top-down’ photography is a breeze.

At 5.5 pounds (2.5kg) for the three-section aluminum 055 and 4.6 pounds (2.1 kg) four-section carbon fiber version, there are definitely lighter travel tripods available… but then again, these tripods aren’t really extraordinarily heavy, nor are they designed for lightweight travel.

Besides, the extra heft serves to enhance stability so you won’t have to worry about the support -and your camera – toppling over in strong winds.

Also, the Manfrotto 055 tripods do have quite a bit of reach, stretching out to a maximum height of 70 inches (170 cm) with everything fully extended.

They also shrink to a manageable 24 inches (61 cm) for the aluminum model and 21 inches (54 cm) for the carbon fiber when they’re stowed.

The Manfrotto 055’s is capable of safely hoisting 20 (9kg) pounds so you can mount a heavy DSLR with a long lens attached without having to be concerned about the tripod failing.

It also has nifty feature where its center column can be positioned 90°. This is very useful if you’re shooting top-down shots, flat-lays, or small products with a macro lens.

The 055’s legs click into four different angles: 25°,46°,66°,88°. This makes it possible to achieve really low or unique vantage points, gain better footing on unstable or uneven ground or even just to make sure that the tripod isn’t knocked down accidentally.

The tripod features rubber sheathing on two of its legs and these make for more secure handling.

They also serve as effective buffers against cold or heat so you need not worry about touching bare metal when the tripod’s been exposed to temperature extremes. 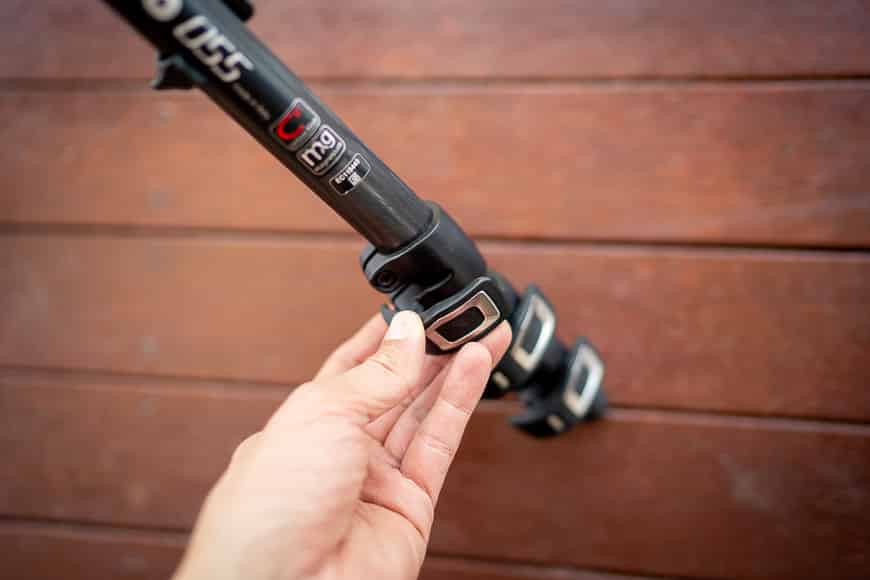 The leg locks are satisfyingly chunky and easy to grip.

The Manfrotto 055 makes use of flip lock clamps that are as heavy-duty as the rest of the tripod. This means that  they do a good job of keeping the tripod positioned, and also they make deploying and retracting the tripod’s legs very easy.

Over time however, the clamp bolts may become loose and the legs may start to creep, but for as long as you periodically tighten them, this shouldn’t be an issue.

Still, it would help to have the proper sized star bit and a driver in your bag just in case.

The Manfrotto 055’s legs are well-refined and slide in and out without snagging. This means that gravity can quickly extend the legs when you release the locks, which can help save valuable seconds when setting up your camera to get the right shot.

You can use gravity to retract them as well but it might be better to do this gently as the force of the leg sections slamming into place will add to wear and tear.

The hinges on the 055 are pretty stiff when new but will loosen up over time. Until then, you’re going to have to put some force into prying the legs apart. You can probably speed things along by working the legs open and closed until they swing more freely.

The Manfrotto 055 doesn’t come with a head but there’s one that’s highly recommended for it – the Manfrotto XPRO magnesium ball head.

Of course,  just about any tripod head with a 3/8″ screw will fit, but the XPRO ball head gives you a very high level of functionality that complements the tripod perfectly.

It comes with three locking mechanisms: a ball lock, a friction control screw for the ball and a pan lock that allows you to swivel the head independently.

These features, along with its polymer rings , make  the XPRO very precise and smooth.

It can also take quite a bit of weight – 22 pounds (10 kg), and comes with either an RC2 quick release plate or an Arca Swiss-style quick release.

The model pictured in this review is actually the Manfrotto XPRO 3-Way, another excellent, affordable ball head. However, I prefer the regular XPRO, since without the retractable levers, the entire tripod unit is much easy to pack alongside other gear. 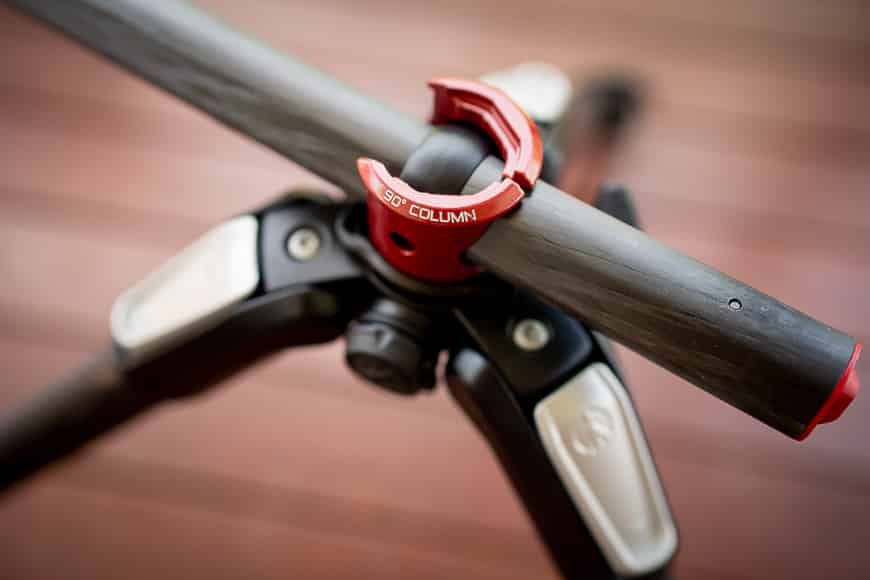 Coming in at under $200 for the aluminum model and just over $300 for the carbon fiber version, the Manfrotto 055 won’t exactly break the bank.

Being some of Manfrotto’s most popular tripods, you can be sure that you’re getting the quality that the brand is known for.

So, if you’ve already spent a considerable amount on quality photography gear, you’re going to want a camera support that’s worth investing in.

Also, given the longevity that Manfrotto is known for, you can expect your 055 to continue serving you long after you’ve retired your current cameras and lenses.

There are a lot of things that the Manfrotto 055 tripod is suited for. It’s great for studio work, it’s an excellent choice for shooting outdoors and you can even travel with it if you don’t mind lugging it along.

It’s tough, it’s versatile, it’s very stable and when used as intended, it can add a lot of value to a photographer’s work.

It also does a fine job of keeping expensive photography equipment safe because of the quality and reliability that’s built into it.

Speaking as an owner of a Manfrotto 055, I don’t see myself investing in another tripod anytime soon. This is because the 055 and my XPRO ball head do everything I need them to do and frankly, there’s just nothing else I’d rather use.

I also know that with a reasonable amount of care, this tripod will stick around for many, many years and will be as useful as it is today.

Don Machuca is a writer and professional photographer/videographer from Manila, Philippines who specializes in landscapes, events and product photography.