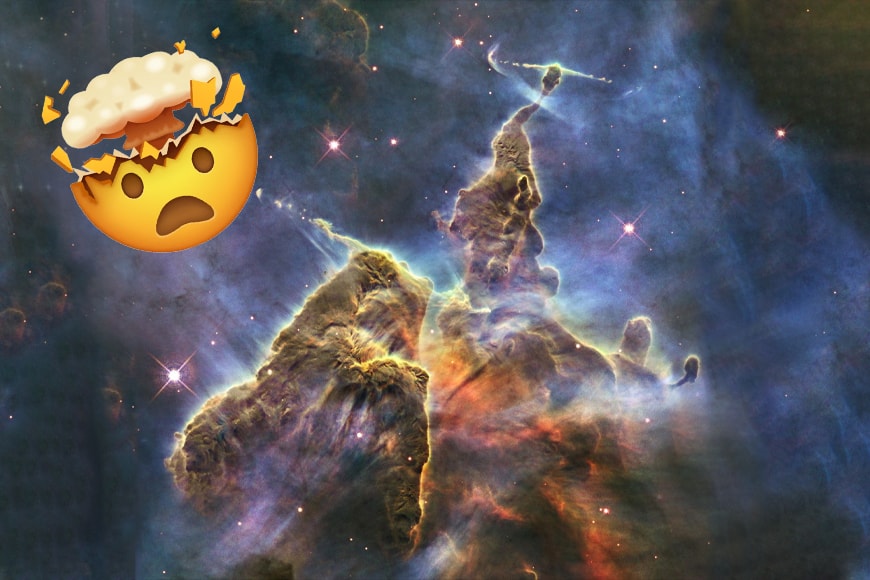 Across the years, NASA has released some of the most incredible images human eyes have ever seen.

Exploding stars. Swirling nebulas. Auroras dancing across the poles of Jupiter. Our home planet viewed from afar, inspiring that strange and jolting feeling known as the overview effect. (Check out image #3 below. Do you feel it?)

Truth is, there’s nothing quite so awe-inspiring as the vast unknown of space. Nothing that makes us feel quite so small and insignificant.

And nothing that makes us realise just how little we really know or understand.

That’s what makes these photos so incredible.

Check them out below – here are 24 of the most mind-blowing NASA photos ever released. 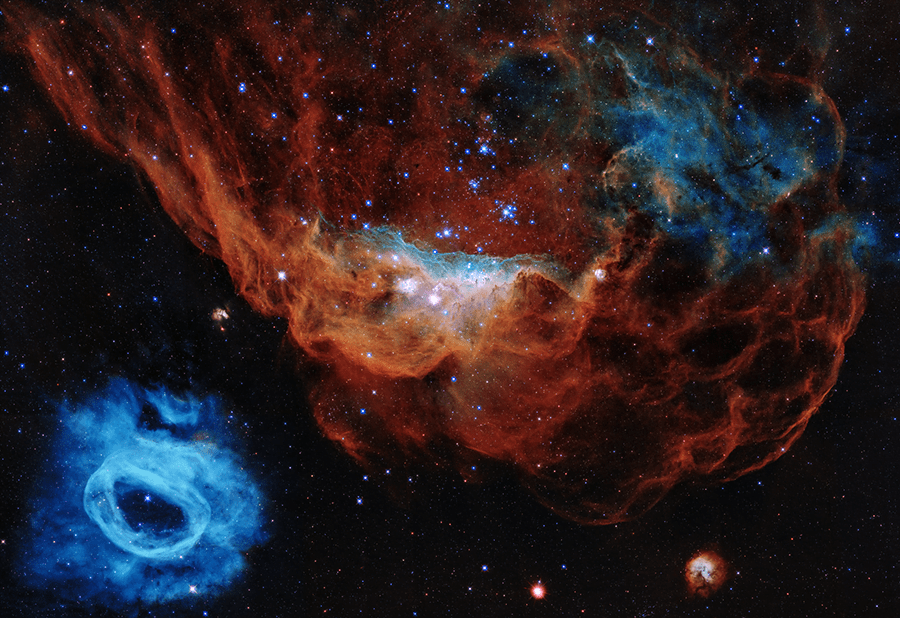 This image resembling a cosmic undersea world teeming with stars was released to commemorate 30 years of the Hubble Space Telescope. The giant red nebula (NGC 2014) and its smaller blue neighbor (NGC 2020) are part of a vast star-forming region in the Large Magellanic Cloud, a satellite galaxy of the Milky Way, located 163,000 light-years away. The nebula’s sparkling centerpiece is a grouping of bright, hefty stars, each 10 to 20 times more massive than our Sun. The seemingly isolated blue nebula at lower left (NGC 2020) has been created by a solitary mammoth star 200,000 times brighter than our Sun. Credits: NASA, ESA and STScI 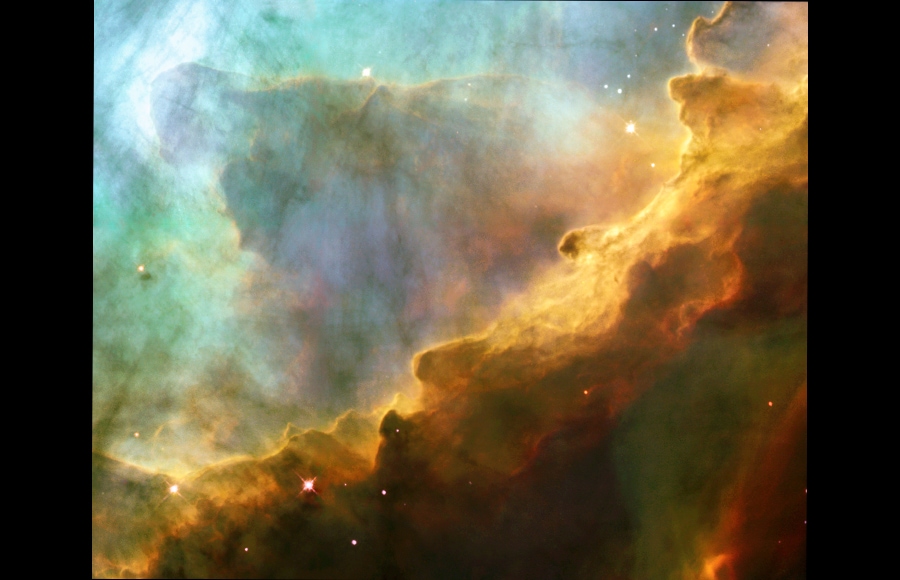 The Omega Nebula (M17) resembles the fury of a raging sea, showing a bubbly ocean of glowing hydrogen gas and small amounts of other elements such as oxygen and sulphur. The nebula, also known as the Swan Nebula, is a hotbed of newly born stars residing 5,500 light-years away in the constellation Sagittarius. The wave-like patterns of gas have been sculpted and illuminated by a torrent of ultraviolet radiation from the young massive stars, which lie outside the picture to the upper left. The ultraviolet radiation is carving and heating the surfaces of cold hydrogen gas clouds. The warmed surfaces glow orange and red in this photograph. The green represents an even hotter gas. 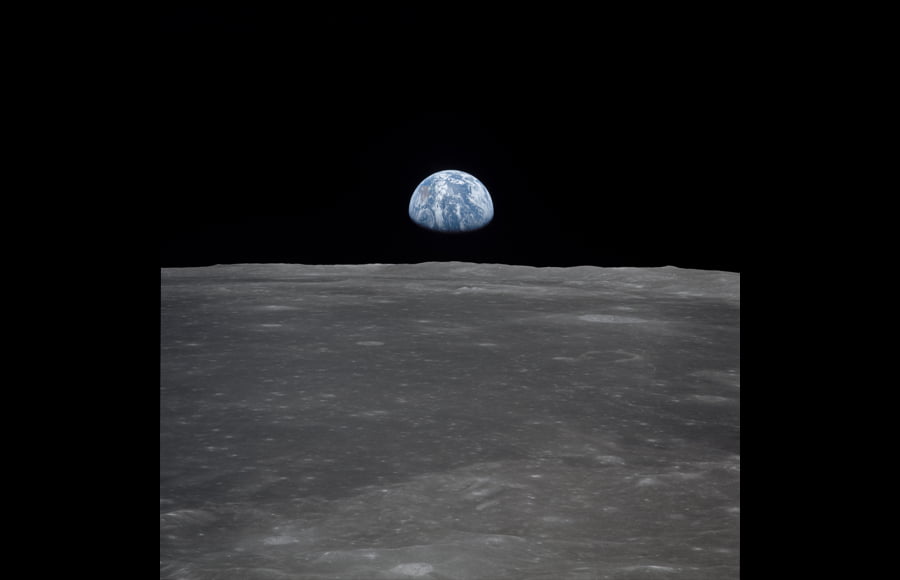 July 1969: This view from the Apollo 11 spacecraft shows the Earth rising above the moon’s horizon. The lunar terrain pictured is in the area of Smyth’s Sea on the nearside. 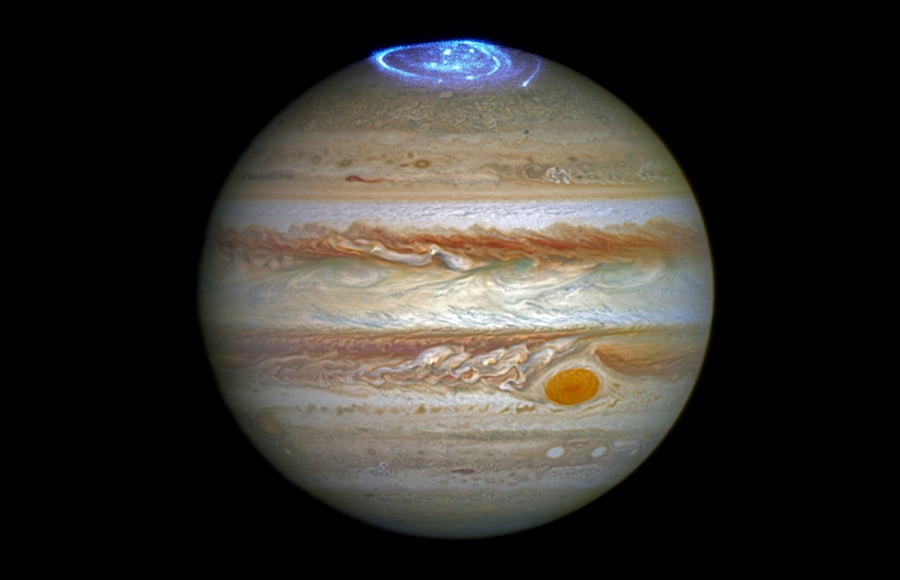 Astronomers are using the NASA/ESA Hubble Space Telescope to study auroras — stunning light shows in a planet’s atmosphere — on the poles of the largest planet in the solar system, Jupiter. Credits: NASA, ESA, and J. Nichols (University of Leicester). 2016 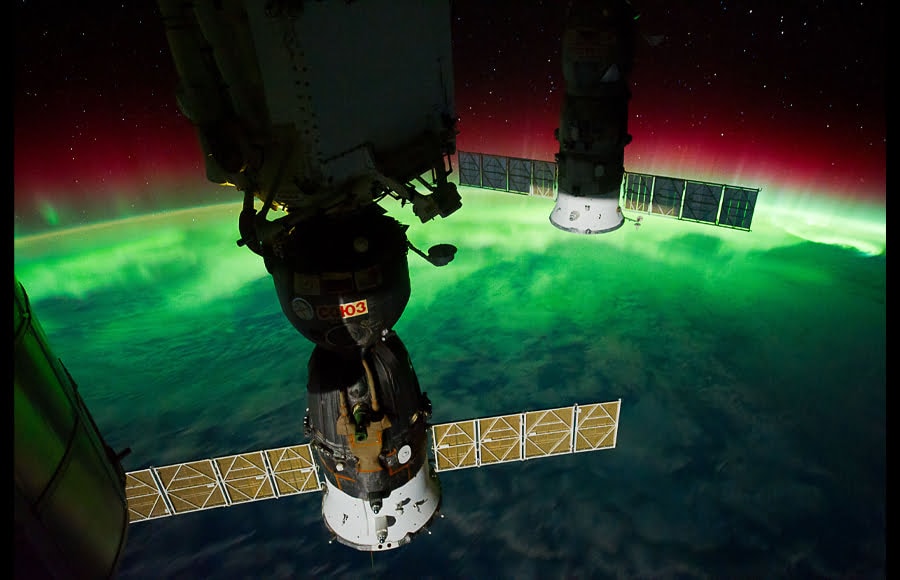 17 September 2011: This is one of a series of night-time images photographed by one of the Expedition 29 crew members from the International Space Station. It features Aurora Australis, seen from a point over the southeast Tasman Sea near southern New Zealand. 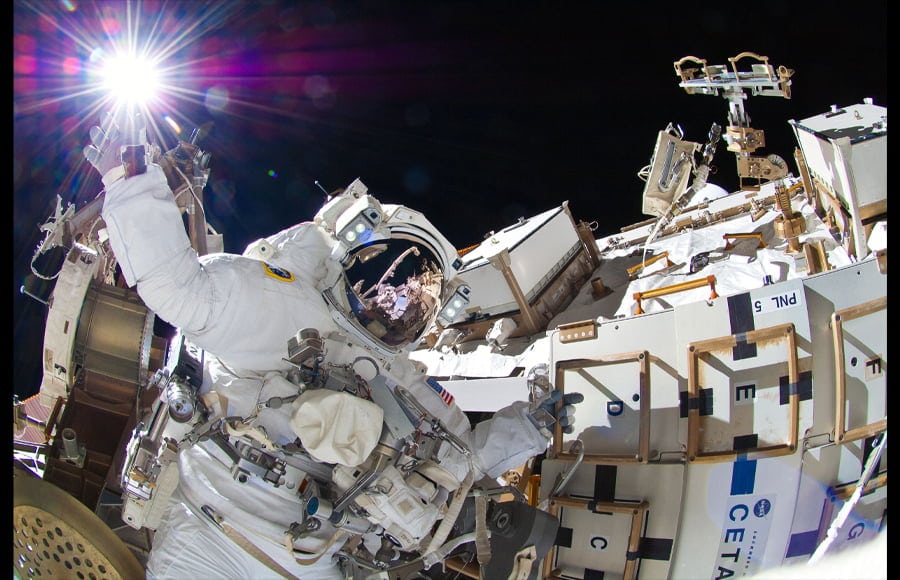 7. Looking Up Inside a Vehicle Assembly Building, 2016. 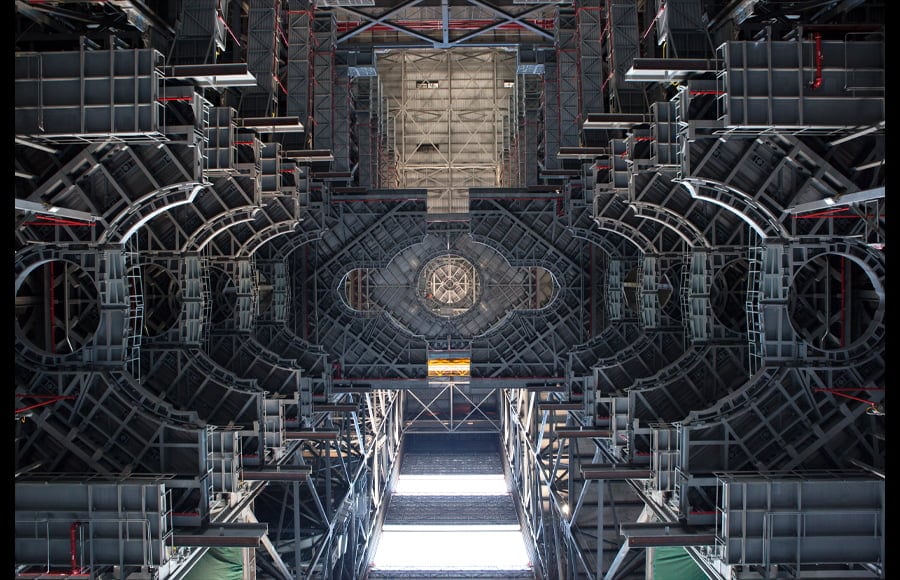 2016: The view members of NASA’s Engineering Management Board had in looking up the Vehicle Assembly Building’s High Bay 3 at Kennedy Space Center in Florida. The platforms in High Bay 3, including the one on which the board members are standing, were designed to surround and provide access to NASA’s Space Launch System and Orion spacecraft. 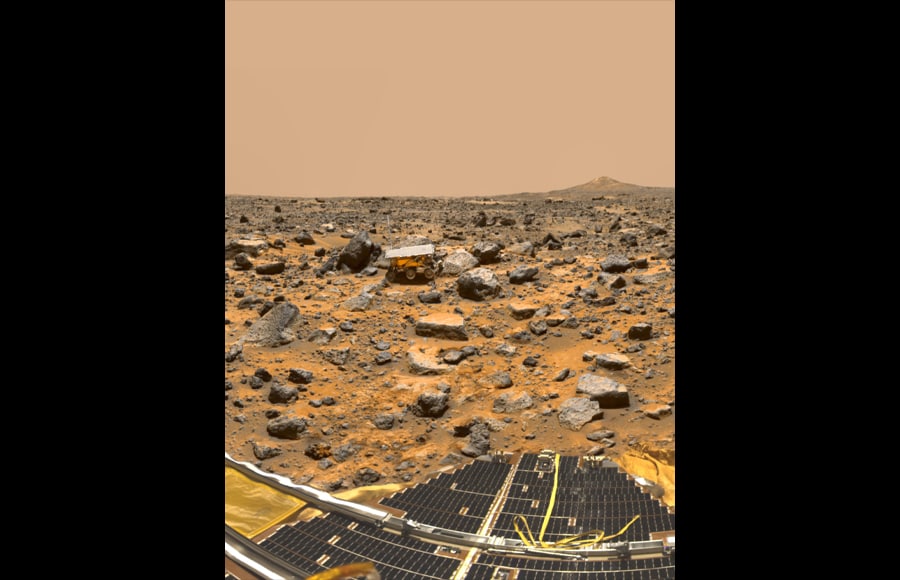 The Mars Pathfinder, a robotic spacecraft, roving the rocky terrain of Mars. 1997 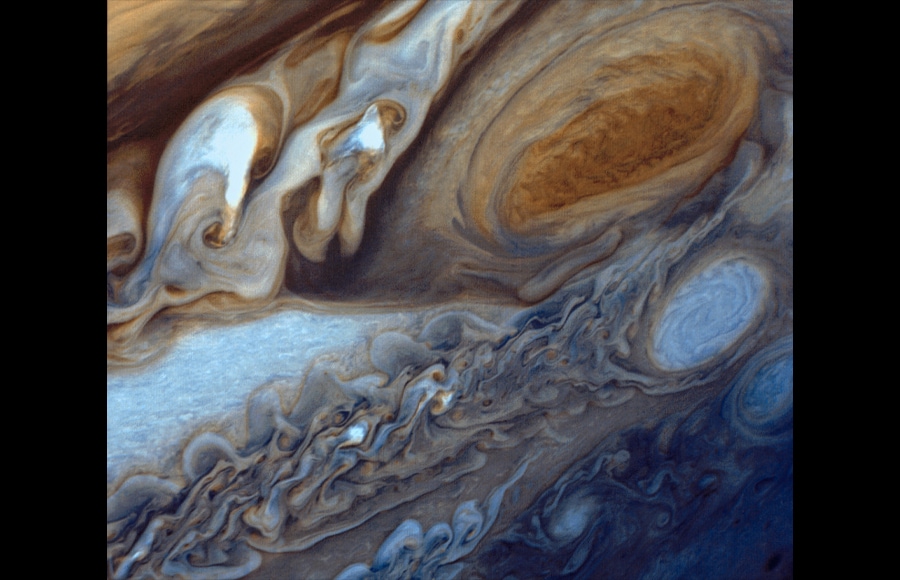 This view of Jupiter was taken by Voyager 1. This image was taken through colour filters and recombined to produce the colour image. This photo was assembled from three black and white negatives by the Image Processing Lab at Jet Propulsion Laboratory. 1998 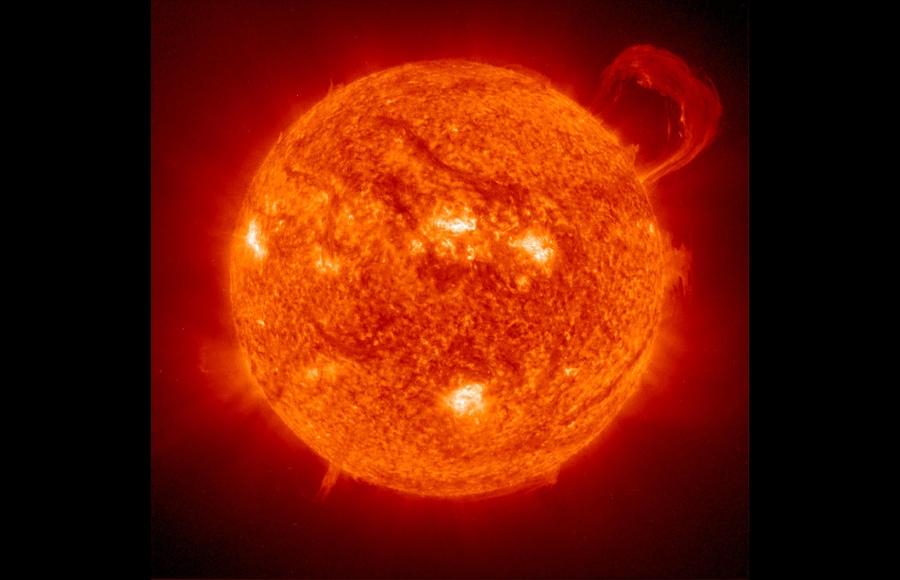 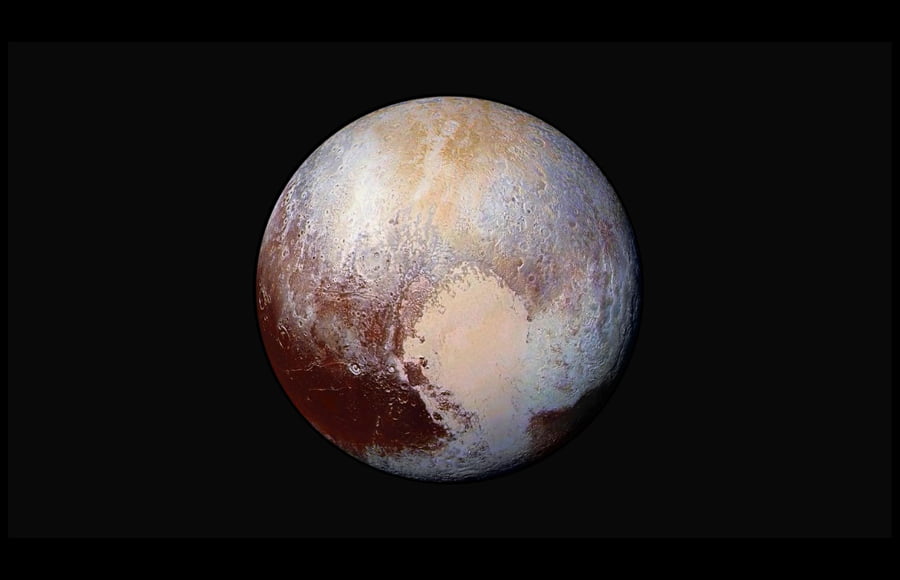 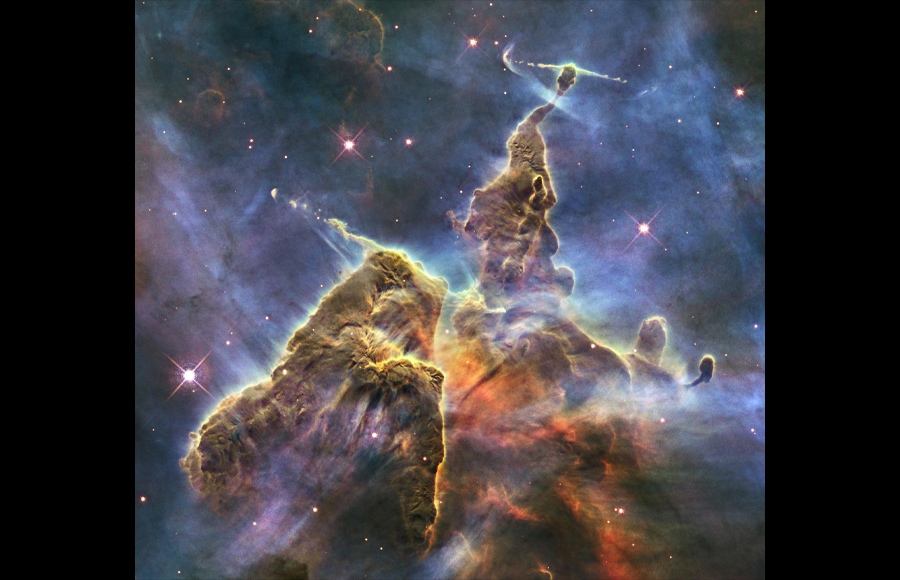 NASA Hubble Space Telescope captures the chaotic activity atop a three-light-year-tall pillar of gas and dust that is being eaten away by the brilliant light from nearby bright stars in a tempestuous stellar nursery called the Carina Nebula. 2010. 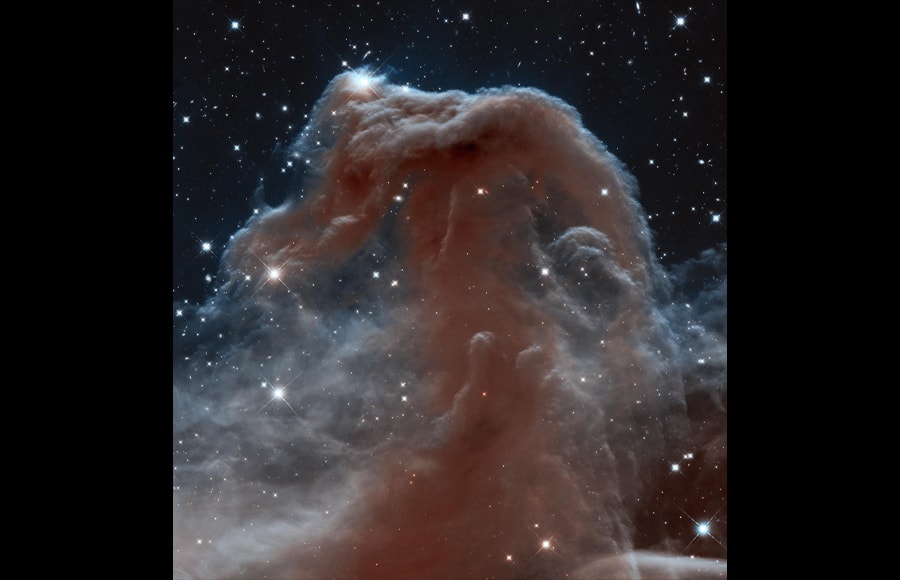 Backlit wisps along the Horsehead Nebula upper ridge are being illuminated by Sigma Orionis, a young five-star system just off the top of this image from the Hubble Space Telescope. 2013. 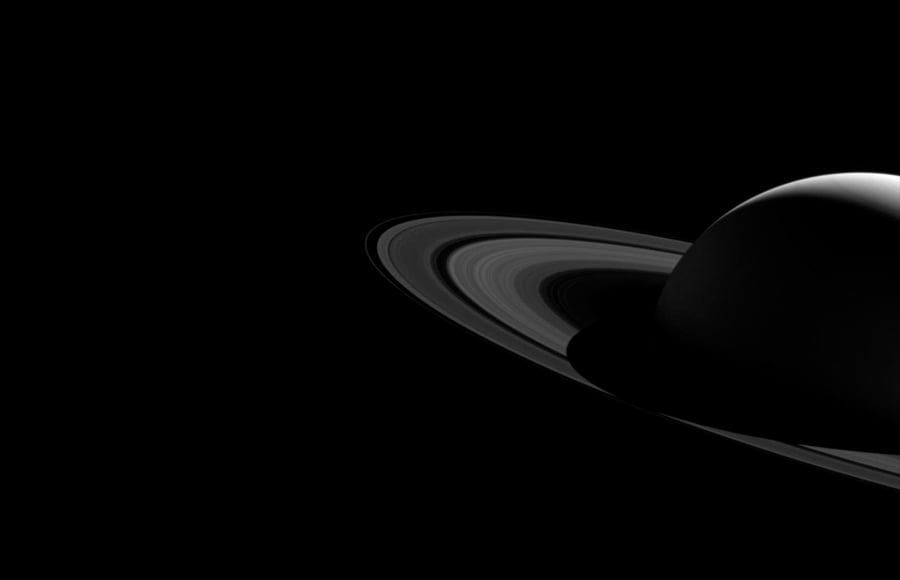 Saturn’s shadow stretched beyond the edge of its rings for many years after Cassini first arrived at Saturn, casting an ever-lengthening shadow that reached its maximum extent at the planet’s 2009 equinox. This image captured the moment in 2015 when the shrinking shadow just barely reached across the entire main ring system. The view was obtained approximately 1.6 million miles (2.5 million kilometres) from Saturn. 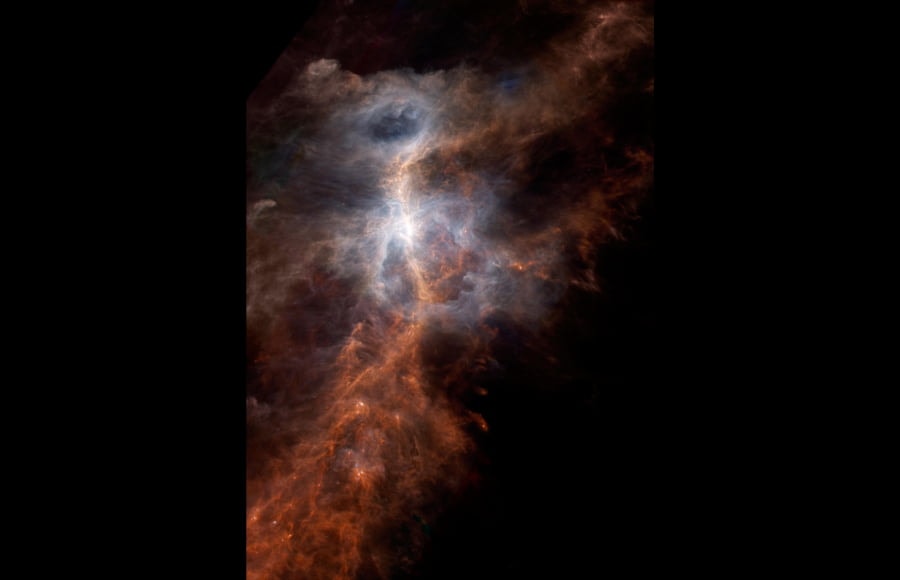 The dusty side of the Sword of Orion is illuminated in this striking infrared image. This immense nebula is the closest large region of star formation, situated about 1,500 light-years away in the constellation of Orion. The parts that are easily observed in visible light correspond to the light blue regions. This is the glow from the warmest dust, illuminated by clusters of hot stars that have only recently been born in this chaotic region. The red spine of material running from corner to corner reveals colder, denser filaments of dust and gas that are scattered throughout the Orion nebula. 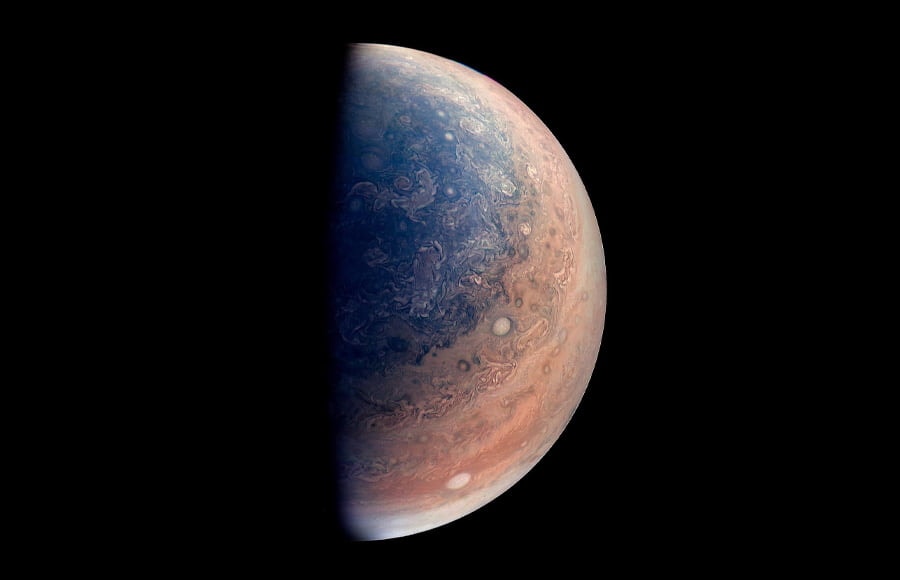 This enhanced-colour view of Jupiter’s south pole was created by citizen scientist Gabriel Fiset using data from the JunoCam instrument on NASA’s Juno spacecraft. Oval storms dot the cloudscape. Approaching the pole, the organized turbulence of Jupiter’s belts and zones transitions into clusters of unorganized filamentary structures, streams of air that resembles giant tangled strings. The image was taken from an altitude of about 32,400 miles (52,200 kilometres) above the planet’s beautiful cloud tops. 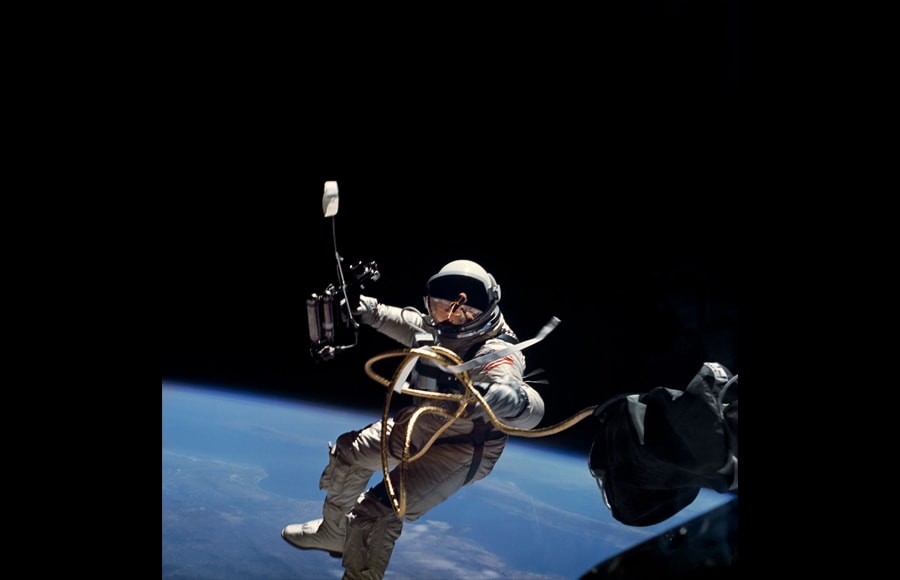 Astronaut Edward H. White II, his face covered by a shaded visor to protect him from the unfiltered rays of the sun. White became the first American astronaut to walk in space. He remained outside the spacecraft for 21 minutes during the third revolution of the Gemini-4 mission. He wears a specially designed spacesuit for the extravehicular activity (EVA). In his right hand, he carries a Hand-Held Self-Maneuvering Unit (HHSMU) with which he controlled his movements while in space. He was attached to the spacecraft by a 25-feet umbilical line and a 23-feet tether line, both wrapped together with gold tape to form one cord. He wears an emergency oxygen supply chest pack. 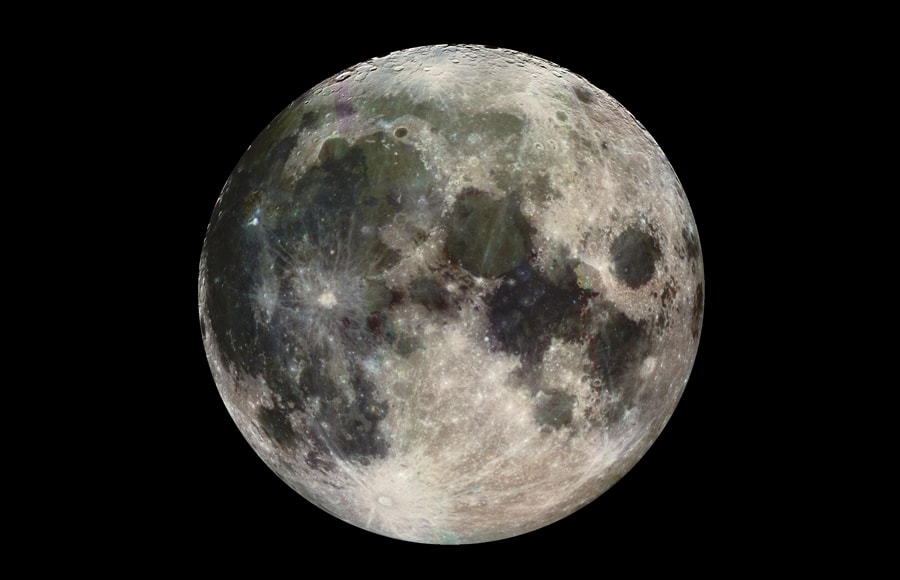 NASA Galileo spacecraft took this image of Earth moon on December 7, 1992 on its way to explore the Jupiter system in 1995-97. The distinct bright ray crater at the bottom of the image is the Tycho impact basin. 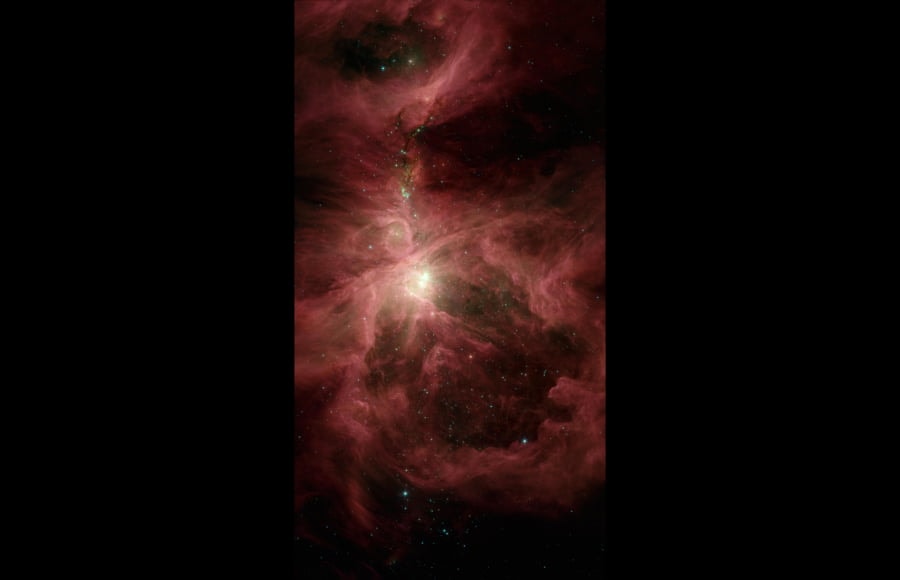 This image from NASA Spitzer Space Telescope shows the Orion nebula, our closest massive star-making factory, 1,450 light-years from Earth. The nebula is close enough to appear to the naked eye as a fuzzy star in the sword of the constellation. 2006

20. Daylight Creeping Over The Northern Hemisphere, 2017. 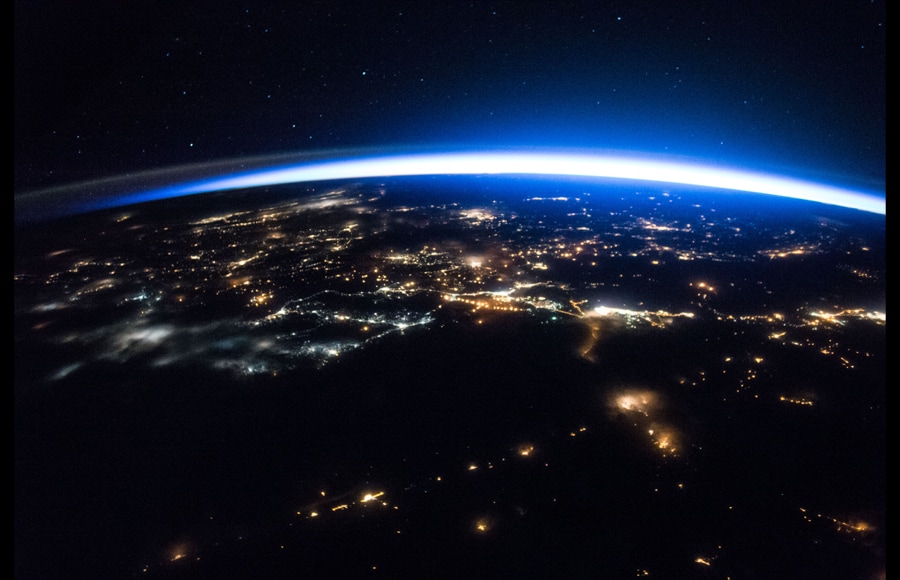 The International Space Station continues its orbit around the Earth as Expedition 50 astronauts captured this night image of sparkling cities and a sliver of daylight framing the northern hemisphere. 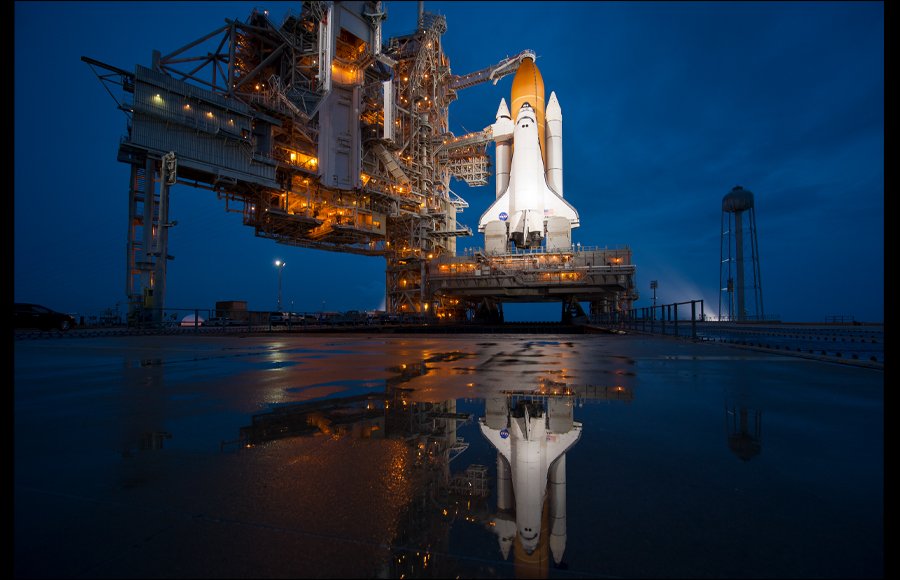 The space shuttle Atlantis is seen shortly after the rotating service structure (RSS) was rolled back at launch pad 39a, July 7, 2011 at the NASA Kennedy Space Center in Cape Canaveral. Photo Credit: (NASA/Bill Ingalls) 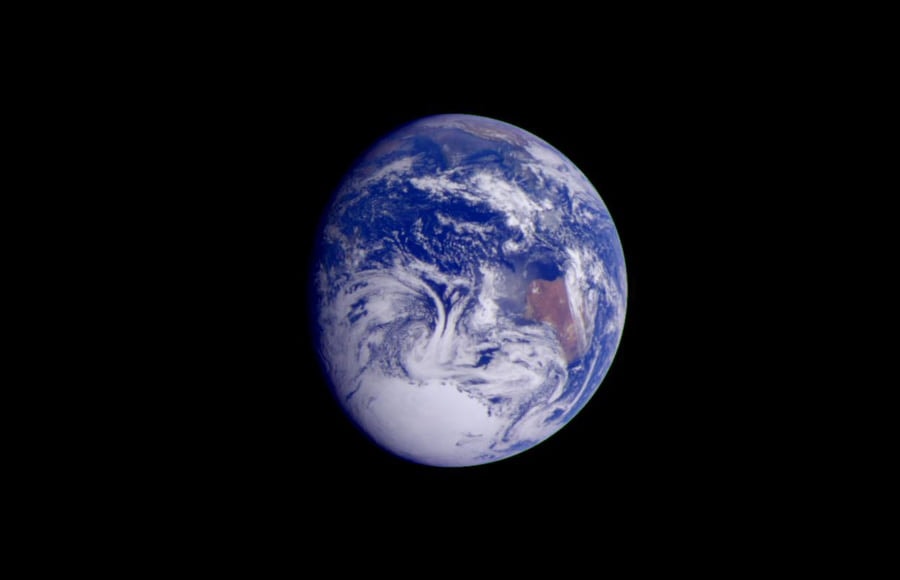 This colour image of the Earth was obtained by NASA’s Galileo spacecraft on Dec. 11, 1990, when the spacecraft was about 1.5 million miles from the Earth. 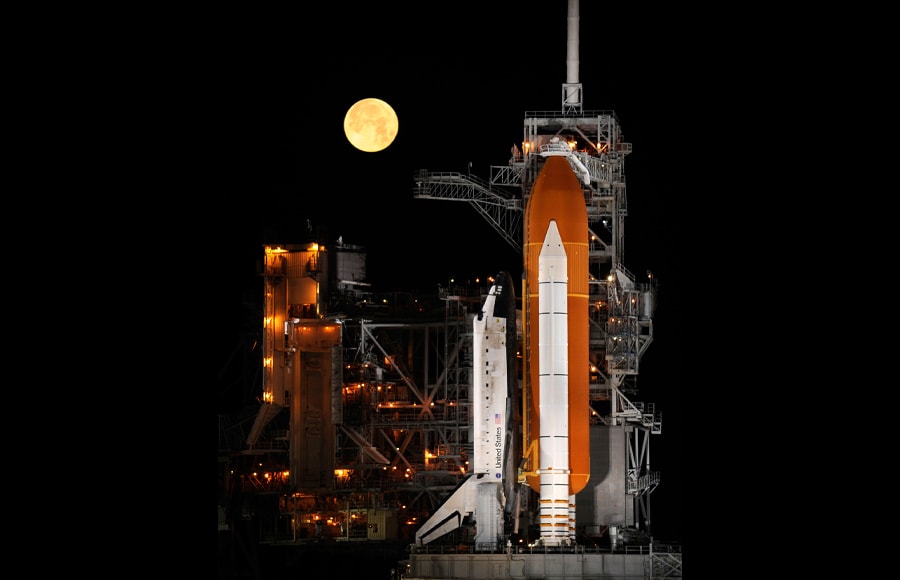 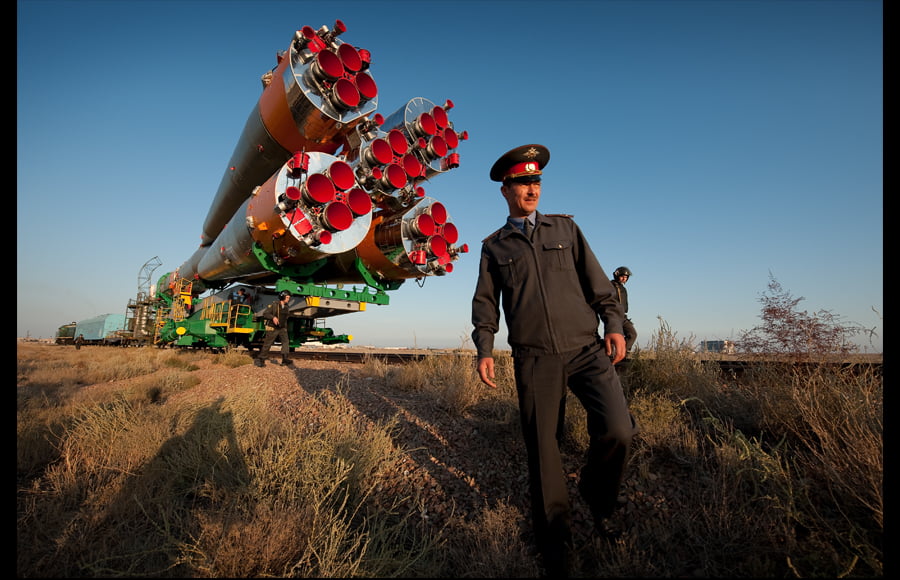 The Soyuz rocket is rolled out to the launch pad Monday, Sept. 28, 2009 at the Baikonur Cosmodrome in Kazakhstan. The Soyuz is scheduled to launch the crew of Expedition 21 and a spaceflight participant on Sept. 30, 2009. Photo Credit: (NASA/Bill Ingalls)

I hope you enjoyed our selection! Which of these photos left you the most gob-smacked?! Let us know in the comments below.