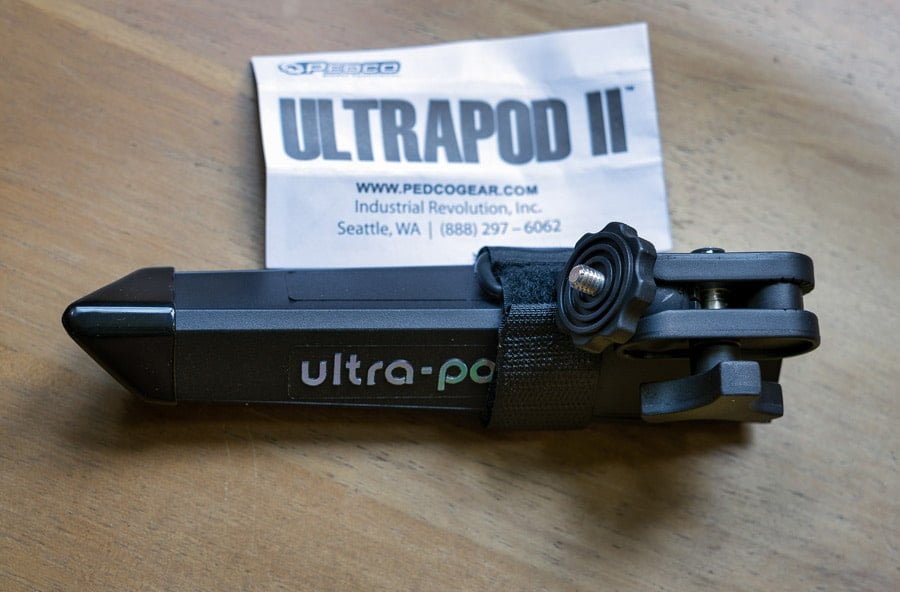 This is a guest review of the Pedco Ultrapod II mini tripod by landscape photographer Usnea Lebendig.

As an avid backpacker and traveler, I’m always trying to get the weight of my kit to a minimum. At the same time, I love shooting long exposure, night time shots, and HDR, which means I need some sort of camera stabilization.

Most of the time I just bite the bullet and lug around my Zomei Z669C travel tripod (the lightest in its category I could afford), but lately I’ve been playing around with the Ultrapod II and the Joby GorillaPod to see if I could get away with a much lighter tripod.

The Ultrapod II is the slightly stronger version, capable of holding cameras up to 2.7kgs (6 lbs). It reputedly works great with everything from GoPros and point-and-shoots to mirrorless and smaller DSLRs.

These days I’m mostly shooting on my Sony A7 III, so I figured it was a good match. Here’s what I found. 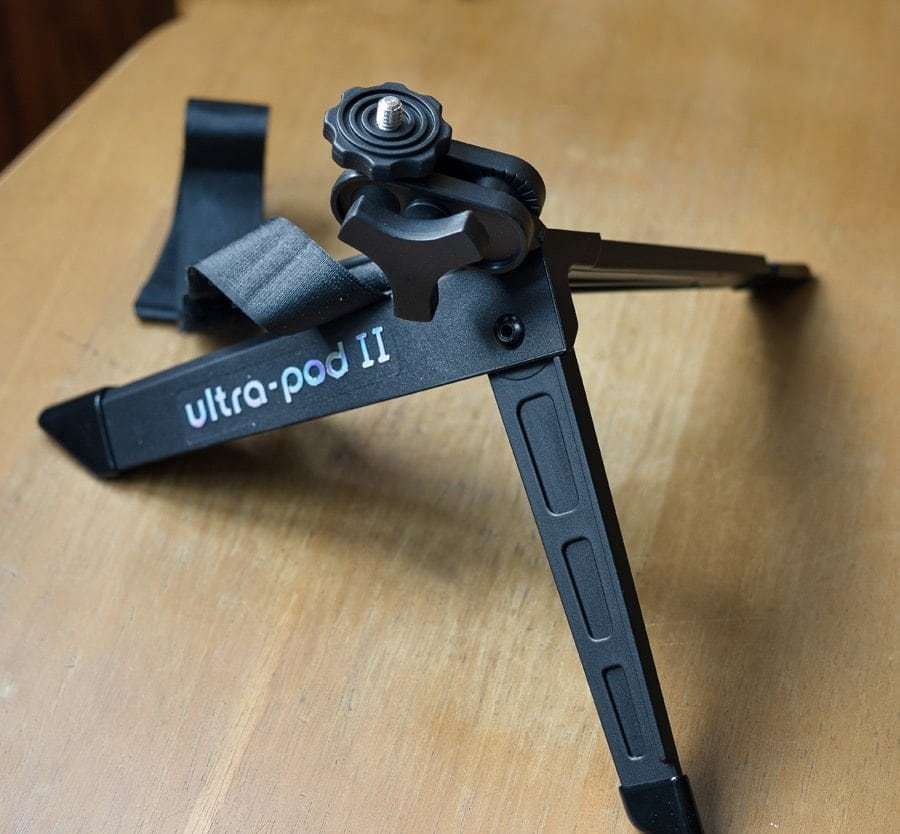 The Pedco Ultrapod II is a lightweight, folding camera tripod that fits easily into the water bottle pocket of any backpack. It features a unique ball and socket head that allows for 360 degrees of panning and tilt/angle +/- 90 degrees.

It uses a standard screw (1/4″) for mounting, so it fits the majority of cameras and camcorders out there, as well as speedlights and video lights.

The legs and body are made from a black nylon resin that seems pretty durable. Unlike the GorillaPod, the legs aren’t bendable. Instead, they’re L-shaped and either fold out like a standard tripod or bundle up into a single stack. (Both formations can be used for support.)

I didn’t really think the L-shaped legs would work well (having tried the GorillaPod first), but the Ultrapod II’s legs are surprisingly stable and fit nicely on just about everything. The rubber tips on the ends of the feet effectively kept it from slipping on just about every surface I tried it on.

One cool feature with the legs on the Ultrapod II is that one is longer and heavier than the others, allowing the use of longer lenses. (I only had my Sony 16-35mm with me, so have no idea if something like a 70-300mm would work.)

Beyond the body and screw, the Ultrapod comes with a D-ring Velcro strap. This is what turns it into one of the most versatile mini-tripods out there. With it you can attach it to any medium-sized tree, post, or railing.

The entire package is remarkably durable, considering how light it is. I’ve put mine through a bit of abuse already and it doesn’t yet have a scratch. (I’ve heard of them lasting well over 20 years and not once failing – even the Velcro!)

It’s also much stronger than it looks, including the Velcro. I was surprised to find that it held my camera and fairly heavy lens firmly to a tree with just a little bit of Velcro attaching. (Yes, I was nervous about it and took adequate precautions, but it held just fine.)

All-in-all, Pedco’s Ultrapod II is a simple yet surprisingly effective design. Its versatility, combined with its light weight and compactness make it an easy component to pack. It won’t replace a standard tripod, but for what it’s meant for its just an excellent design. 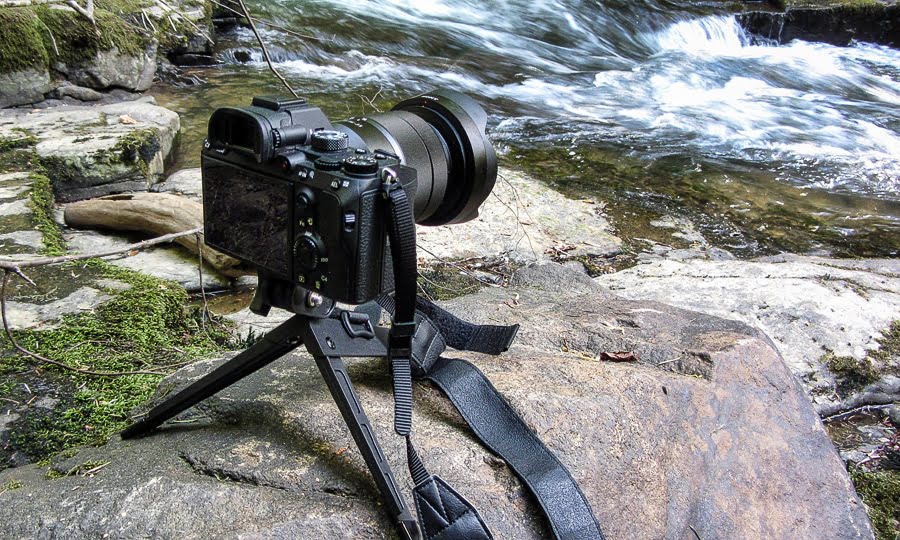 The Ultrapod II is designed to grab both even and uneven surfaces.

At first glance the Ultrapod II looks like a standard table-top tripod, and it certainly works well as one. What makes it special, however, is everything else you can do with it.

As mentioned above, the Velcro allows it to be attached to anything with the diameter of roughly 1-2 soda cans. The rubber-coated feet adapt to rough terrain without a problem. Uneven ground isn’t really much of a problem, since the ball and socket allow you to level out the camera.

Because the Ultrapod II folds up like a knife and has L-shaped legs, it also makes for a great handheld stabilizer. Simply attach your camera to the head and then lay the legs flat against your wrist.

This comes especially in handy when you’re on the go and shooting video and/or dealing with low light.

One thing that will add enormously to the Ultrapod’s versatility is a remote trigger. This will allow for everything from excellent macros (because the Ultrapod can get much lower to the ground than most tripods) to long-exposure shots, without incurring camera shake.

It also makes it easy to take selfies of yourself out in nature – something pretty hot in today’s photography world.

The Ultrapod II is hugely popular for its great features and affordability.

Another especially cool application is if you use off-camera lighting (especially speedlights). Since the Ultrapod II’s screw mount fits most flashes, you can solidly attach an external flash to just about anywhere with a tree or post.

Use it to set your flash at a 45 degree angle to your camera, create backlight, or even use two or three speedlights to create a multiple-light scene. (The Ultrapod II, at least, is so inexpensive it wouldn’t tax the wallet to have a few of them.)

Obviously you’re not going to be able to get shots much above ground level when there’s nothing to attach to. That means you’ll have to get creative when there are no trees or posts around.

Still, that’s not really a bad thing – shooting from that low down is a unique perspective and for me, that was part of the fun of it. (It certainly beats trying to lay my camera on my pack for stability when I don’t have anything better.)

Pedco Ultrapod II | Ease of Use 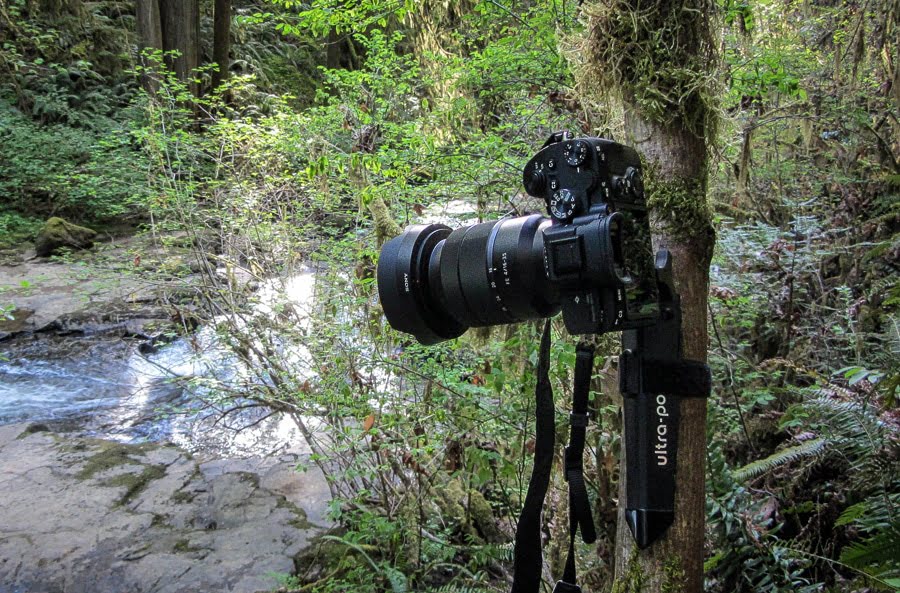 The Velcro on the Ultrapod II makes it quite versatile.

The Ultrapod II is hailed as extremely easy to use, and with practice this is totally true. That doesn’t mean there aren’t some things to get used to, though.

For example, there’s only one knob for controlling both how your camera sits on the legs and the tilt/yaw of the ball-and-socket head. This isn’t always as intuitive as one might think – especially when the whole device is attached to something.

It’s also a bit hairy attaching the camera + Ultrapod to something when the camera is already attached. Attaching the Velcro tends to take two hands, yet one needs to hold everything secure at the same time.

This might not be much of a problem with a flash, smartphone, or point-and-shoot, but my Sony A7 III + wide angle lens was heavy enough (and expensive enough!!) to need a hand on it. Attaching the camera after attaching the tripod wasn’t really an option, as there was rarely room to do so.

I also found the placing of the Velcro on the strap created much more limiting attachment options than I expected. Not only could I not go beyond the length of the strap, but I also couldn’t figure out how to go smaller than a soda can (i.e. to a trekking pole).

What it did attach to, though, it attached to quite firmly. I was both surprised and pleased.

Otherwise, everything worked as expected. The feet gripped magnificently, even on wet rocks. Carrying it around with the camera attached was no problem.

On the ground it was quite sturdy, even with a bit of wind. The Velcro, once attached, was also solid. Best of all, it fit better in my pack than any other tripod I’ve ever carried.

Pedco Ultrapod II vs the GorillaPod 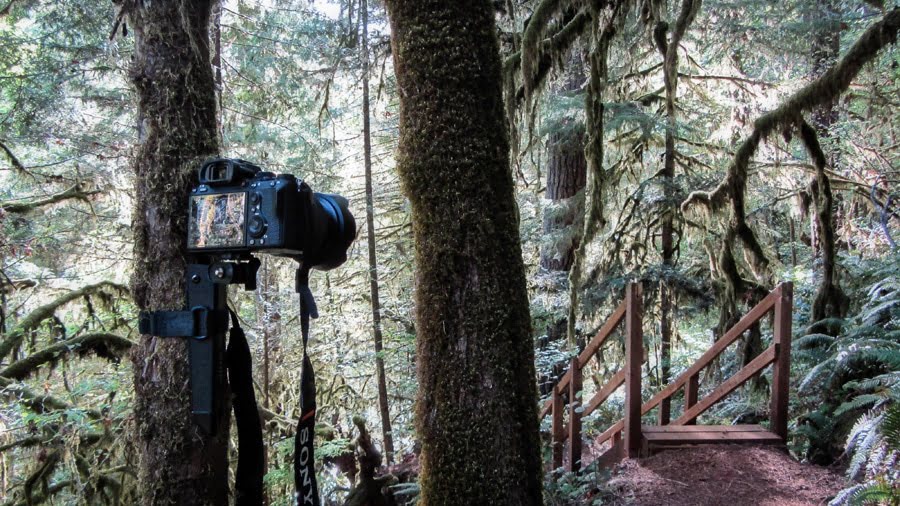 You can attach the Ultrapod II to a thicker tree trunk than you can with the Gorillapod.

In some ways the Ultrapod II and the GorillaPod might seem like they have a lot in common. They’re both light-weight, table-top-size tripods that fit easily in a pack and can attach to a variety of things. Beyond that, though, there are plenty of differences.

The most obvious difference is how they attach. While the Ultrapod II uses Velcro paired with straight, L-shaped legs, the GorillaPod uses bendable legs to adapt/attach to just about anything. This gives the GorillaPod a bit of an advantage in versatility… but that’s where the benefits stop.

The Ultrapod II is both smaller (a full 3 inches shorter than the most comparable GorillaPod, the 3K) and is a third of its weight (119g compared to 393g). It’s also much easier to get into a fully loaded pack.

Price-wise there’s no contest. The Ultrapod II is only $19, while the GorillaPod 3K is $40. Sure, you could buy a cheaper GorillaPod, but the 3k is the one that most matches the UltraPod II’s capacity.

In the end, which one you decide on will depend on your application. If you find that you often need the GorillaPod’s ability to grip things, that might be the way to go. Otherwise, save yourself some money and get an Ultrapod or two.

Whether you’re a traveler not wanting to lug around a tripod in a city, a backpacker needing to minimize their weight, or a creative photographer who loves to use off-camera flash, the Ultrapod II is a handy little tool.

It holds up well, does everything it’s supposed to do, and opens up a world of possibilities. It’s also quite affordable.

I wouldn’t put a camera like the Nikon D4 on it, or a large telephoto lens. It’s not built for that kind of weight/size. But for lighter camera/lens combos – especially mirrorless or smaller – it will do well.

For me, though, the best part about it is its portability. It folds up so small and packs so compactly, you’ll hardly notice it in your pack. All in all, the Pedco Ultrapod II is a stellar piece of gear and well worth the price. 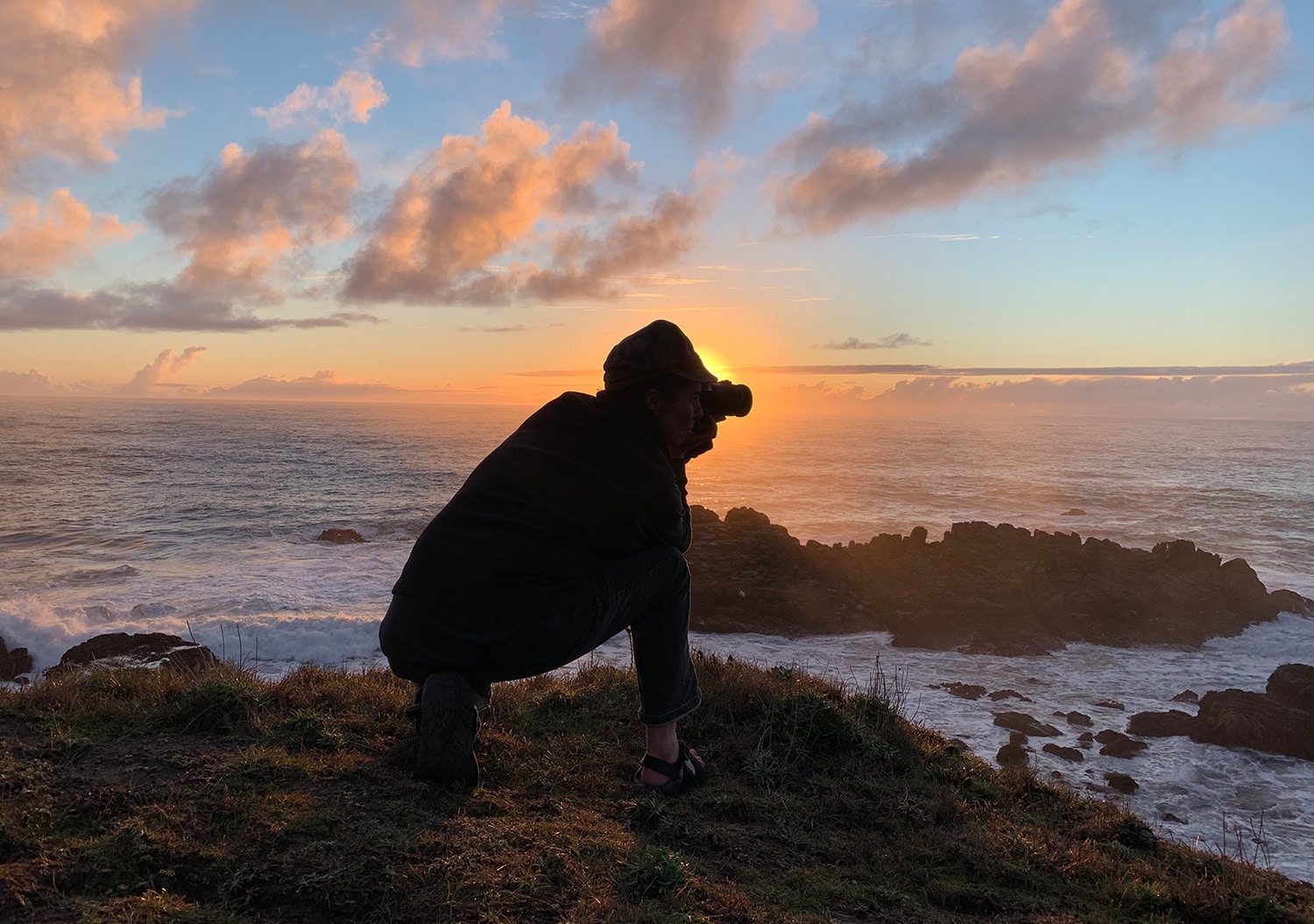