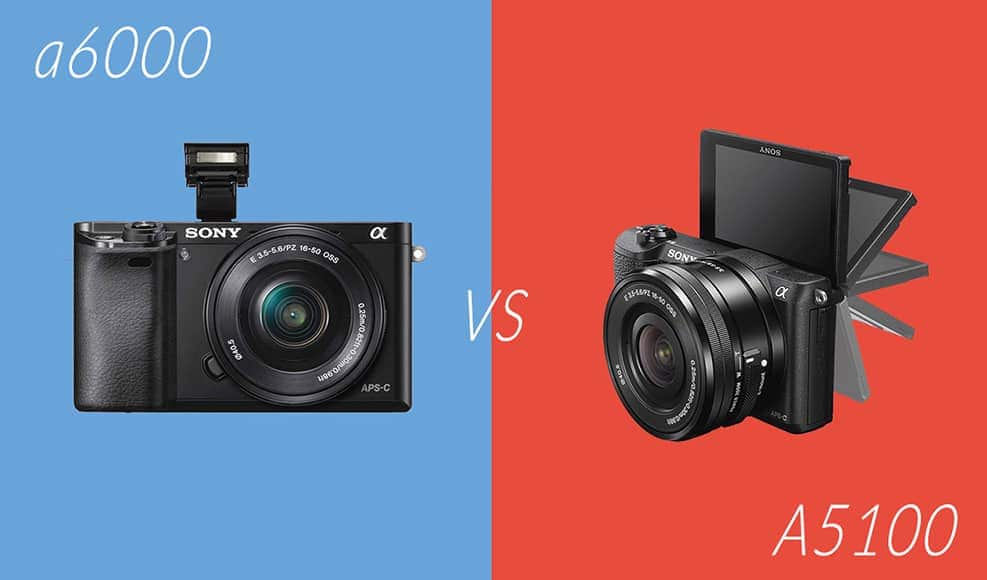 If you’re trying to decide which APS-C sensor mirrorless camera to buy, you’ve come to the right place – this Sony a5100 vs a6000 guide should help you make the right decision.

Despite not being the latest models here in 2022, the Alpha a5100 and a6000 are still two enormously popular Sony mirrorless cameras. 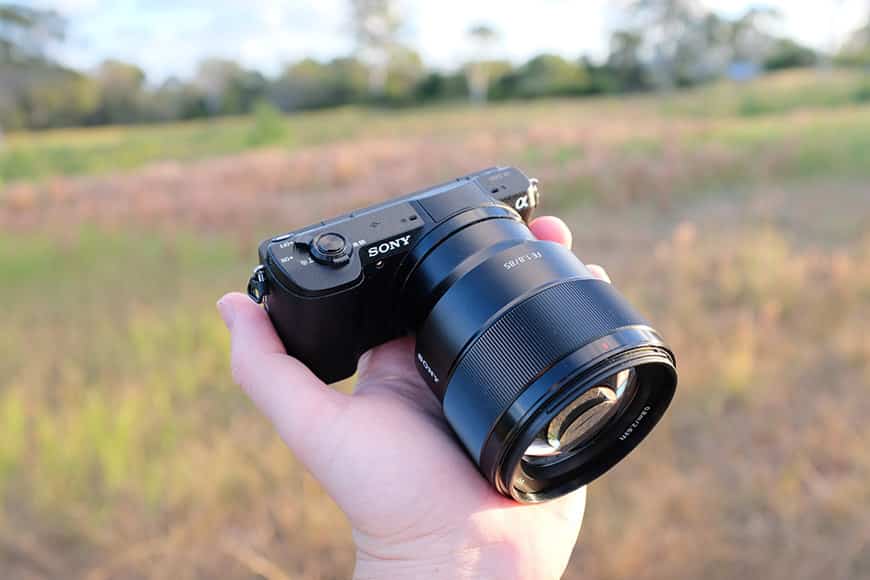 With its electronic viewfinder, fast autofocus, rapid burst mode and easy controls, the a6000 wins it by a nose.

The Sony a6000 in fact is the top-selling mirrorless camera body of all time… and the a5100 is nipping closely at its heels.

So, if you’ve got less than $1,000 to spend on a great camera and a couple of lenses, this is the article for you.

Let’s see which is the best Sony camera for your money in this comparison.

Additionally, being an interchangeable lens camera, a bigger lens fitted on the a5100 might constrict the space for the grip even more, thus giving the user even less of a handhold. This means that people with bigger hands may experience a bit of awkwardness and may not be able to hold onto it as comfortably as they would an a6000.

In comparison, at 10 oz (.28 kg), the Sony a5100 (full review) is lighter vs the a6000 which comes in at 12 oz (.34 kg). However, this really isn’t much of a difference and shouldn’t be noticeable at all. Besides, the added capabilities of the Sony a6000 makes this very slight weight penalty justifiable.

These Sony mirrorless cameras are certainly very capable, but the Sony a6000 (full review) edges out its sibling because it has things that the other one doesn’t, namely: an electronic viewfinder (EVF) and a hotshoe. These are important enough features that many photographers would choose the a6000 over the a5100 just because of these add-ons.

The lack of a hot shoe means that the Sony a5100 has to rely on its pop-up flash to illuminate its subjects. Meanwhile, users of the a6000 have the luxury of fitting an external flash. This results in it being able to take images in certain situations that its counterpart would be hard-pressed to match.

As for the EVF, the Sony a5100 doesn’t have one and because there isn’t a hot shoe mount available, so there’s no way to attach an EVF accessory to it. This is a particularly serious issue for shooters who’ve logged a lot of time on DSLRs as they will most likely want this feature available on any camera they buy.

An EVF or some form of viewfinder is essential in brigh sunlight, where the rear screen of a camera is can often not be seen at all, due to the glare. If you shoot a lot in harsh midday sun or very bright locations, this could make your decision much easier, since there’s a clear winner here.

The Sony a5100  and a6000 are both fitted with 3-inch, 921K TFT LCD screens. Though they serve the same basic purpose, which is to compose and preview images and playback videos, these screens significantly different from each other.

The LCD on the Sony a5100 is a touch screen that serves as a menu interface and lets the user choose focus. It also makes for a good monitor because the touch screen flips up a full 180 degrees, thus allowing for well-composed shots with the shooter in the frame.

In comparison, the a6000’s screen does not have touch capabilities and can only be articulated to a maximum of 90 degrees. While this makes for good waist-level and top down shots, it can be quite challenging to work with if the shooter has to accurately shoot on the move while being in the frame.

The cameras both do quite well when it comes to autofocusing but the Sony a6000 just does it faster. In fact, its autofocus is just about instantaneous and it does a very good job of tracking subjects as well – this is incredible considering the age of the camera. Sony’s auto-focus in general is just second to none.

Then again, the Sony a5100 does have something its sibling doesn’t: touchscreen focusing. With this feature, the user can select where the camera’s focus should be, so the output is more deliberate and conforms more to what the user wants to see. It’s also a nice feature for those transitioning from a smartphone, since tapping the touch screen to set focus points will be a familiar action.

As far as continuous shooting (burst mode) goes, the Sony a6000 takes the win as it is capable of an impressive 11.1 frames per second. This is well over the a5100’s burst capability of just 5.9 fps.

While not relevant when shooting still life or stationary subjects, the a6000’s speed becomes a distinct advantage when shooting fleeting moments or fast action shots. It’s no surprise that the a6000 is the best camera for sports photography for those on a tight budget.

The a5100 conveniently makes use of a touchscreen to handle most of its controls so a dial isn’t present on the top of the camera. It’s true that this is a workable arrangement and shouldn’t matter if the shooter is not under a time crunch. However, if the shooter has to switch modes quickly, there’s a good chance that he or she will lose the shot in the time it takes to access the menu and change settings.

This dial is present on the a6000 so it provides flexibility and proves faster to work with it when it comes to changing modes. But of course, there’s a downside to this because Sony did not deem it necessary to give it touchscreen functionality.

Despite the absence of a touchscreen, the a6000 still comes out on top as this camera gives you a better chance of shooting the money shot in fast-paced environments.

Before price is considered, it would help if you have a clear idea of what you want in a camera.

Is something that’s just about as easy to use as a point and shoot camera desirable? Do you dislike adjusting too many controls? If the answer to these questions is yes then the sub-$400 a5100 with the included 16-50mm kit lens would be the better choice (see latest price here).

However, if you want something more technical and substantial, or a camera that has a very good burst rate that can be fitted with an external flash, then the sub-$500 a6000 with the 16-50mm kit lens is the one to get (see latest price here).

Keep in mind also that there are quite a number of lenses that can be used for these cameras so you can opt to purchase the body only and pick and choose which lenses and accessories will serve you best – see the best Sony a6000 lenses here.

Image quality should be at the top of the list when shopping for a new camera… so why have we left the best until last?!

Well, the as you may already know, these two Sony cameras share the same sensor as well as the the same processor, meaning that their image quality should be pretty much identical.

Obviously, the image quality of an inter-changeable camera is limited by the lens that you attach to it, but assuming you’ll be attaching nice fast glass when shooting (i.e. lenses with a larger aperture), you should be able to capture great looking images with either camera.

(One thing to note – faster lenses usually mean a higher price tag, but a fast lens also allows you to keep shooting when the light starts to fade and blur more of the background. Zoom lenses provide flexibility but aren’t as fast as prime lenses of the same price.)

This Sony a5100 vs Sony a6000 aims to separate the two cameras to help you decide, but as far as shooting the best quality image, they tie neck and neck!

Yes, the Sony a5100 uses the E mount system so it can be used with Sony’s range of E-mount lenses as well as aftermarket lenses designed to work with it.

No, the Sony a6000 isn’t a DSLR camera. Instead, it is what is known as an interchangeable lens mirrorless camera. Simply put, the mechanical DSLR mirror is deleted to minimize size while the ability to fit different lenses is retained.

Is the Sony a6000 a good camera for beginners?

Yes, the Sony a6000 is good for beginners as it is easy to use. Of course, this doesn’t mean that it’s a basic camera because it has more than enough functionality to satisfy even professional shooters. Ultimately, what this translates to is that this camera can accommodate the expanding abilities of a novice as he or she picks up more and more skills. 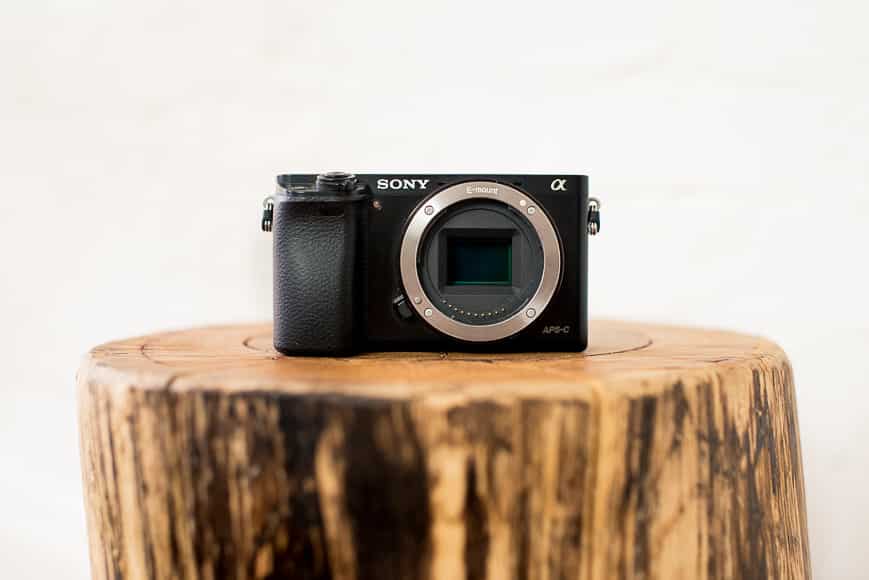 A few differences notwithstanding, the Sony a5100 and a6000 perform almost identically. They share the same sensor, the same processor and have a myriad of other commonalities that make them very well matched.

Oddly enough though, they are good at different things so a choice between these two is really up to the user.

The a5100 is less expensive but this doesn’t necessarily equate to inferior. This is because there are many photographers who prefer a simpler camera. Besides, its flip up screen isn’t found on the a6000 so it would be very attractive to vloggers or to people who like being in the shot (since you can take ‘selfies’!)

Touchscreen is also a feature that the a5100 offers, but the a6000 does not – I for one love to be able to touch a screen where possible, especially when it helps me take a photo quicker.

The Sony a6000 on the other hand is more expensive, but it does come with a few enhancements that justify the bigger price tag. The hot shoe mount and the EVF for instance will attract more serious photographers who prefer to use viewfinders, external flash guns and don’t mind dialling in their own settings.

All told, the a5100 and a6000 are both high-performing cameras but the niches they fill are somewhat different. As such, it would be a good idea for someone who’s considering a purchase to know what they want to do with the camera so they can pick the right one.

(You should also read about the differences between the a5100 and the a5000.)

If you’re still having trouble deciding, our preference is the Sony a6000 – despite it being older, it’s the best-selling camera Sony has ever produced for good reason, and that physical EVF is essential when the sun is out.

With its electronic viewfinder, fast autofocus, rapid burst mode and easy controls, the a6000 wins it by a nose.

Don Machuca is a writer and professional photographer/videographer from Manila, Philippines who specializes in landscapes, events and product photography.