If you have a curious mind, you’ve probably wondered how a camera takes a picture. While that’s a big topic to cover, one of the essential elements of a camera’s function is how the shutter works.

The camera shutter is a device that’s existed for over a century. What’s more, as technology has advanced, so has the functionality, durability and performance of the camera shutter.

Why should you learn about it? Well, a key element of learning about photography is to know how a camera works – inside and out. Knowing the full extent of your camera’s functionality and capabilities makes you a better photographer.

That’s why understanding everything there is to know about shutters is a fundamental part of your development.

Ready? Jump into our ultimate guide that answers everything photographers want to know about camera shutters.

What is a Camera Shutter?

A camera shutter is a device located inside the camera covering the image sensor. Why do cameras have shutters? The camera has a shutter as it acts as the gatekeeper of light – it decides which light will pass the gate and which will not.

When you control the shutter speed on your camera, you tell the shutter how long to stay open and expose the sensor to the incoming light.

This device exists in both DSLR and mirrorless cameras – however, they operate differently from one another.

Plus, it’s essential to understand the different types of shutters and how they move and function.

What Are the Two Types of Camera Shutter (and How Do They Work?)

Camera shutters are not a new thing – they’ve been in use for decades and date back to the days of early film cameras.

Mechanical shutters required precision mechanical engineering to produce the parts and then assemble them with accurate performance.

Electronic shutters have progressed a long way to replicate and improve upon the process of mechanical shutters.

Regardless, mechanical shutters are still a necessity to meet the growing needs of photographers today.

Mechanical shutters come in two forms – focal plane shutters and leaf shutters. While they both have a mechanical function to block light and expose the image sensor, how they do it is vastly different.

Understanding the difference is a vital part of learning how cameras operate.

The Fujifilm X-T3 has a focal plane shutter

A focal plane shutter (FPS) is a form of mechanical shutter commonly found in DSLR and mirrorless cameras such as the one above. It exposes the camera sensor or focal plane to the light coming in from the lens.

Focal plane shutters usually take the form of two metal or plastic curtains that slide across the focal plane or sensor in unison with a slight gap between the two.

The passing gap is what allows light to hit the entire image sensor. In some cases, there’s only a single curtain.

The speed at which the focal plane shutter moves is determined by the shutter speed setting. With longer exposures, the gap passes the image sensor very slowly.

In a DLSR camera, the focal plane shutter can move as fast as 1/8000 of a second. 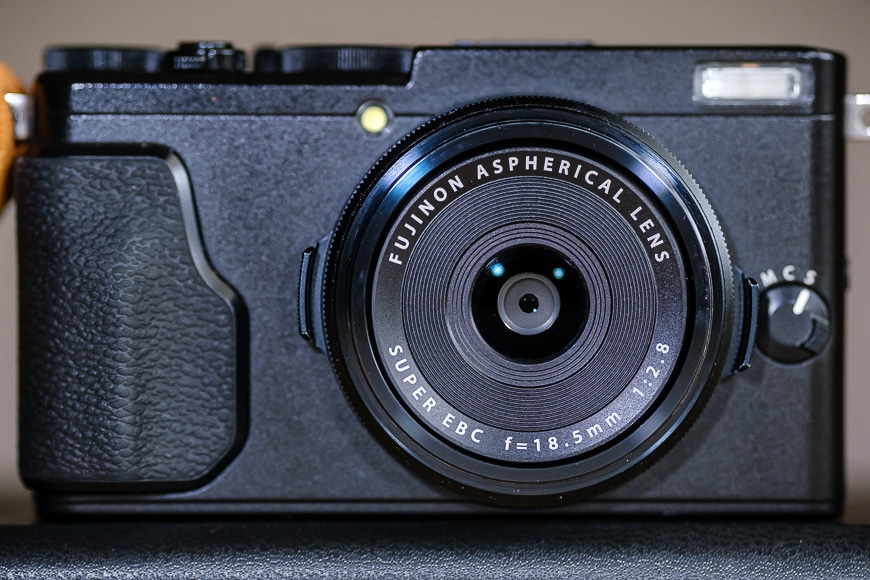 The Fujifilm X100 series and X70 have leaf shutters.

A leaf shutter is entirely different in build to a focal plane shutter, in that it’s a diaphragm that works much the same way as an aperture inside a lens.

Located in front of the camera sensor, a leaf shutter has overlapping metal blades that close so no light passes through to the sensor. When you press the camera’s shutter button, the blades open to allow light to pass through.

Once the shutter speed duration has lapsed, they snap shut to block any further light spilling in. Each of the diaphragm blades of a leaf shutter opens from the centre out.

A focal plane shutter is positioned up against and almost touching the sensor, while a leaf shutter sits forward from the sensor up against the lens’s rear.

This way, the leaf shutter does not have to be a significant device to cover the whole image sensor. It can be as small as the rear element of the lens, such as in the image above.

With a fixed lens, the rear lens element is relatively small. The leaf shutter is the same size and sits directly behind this element – effectively blocking the light passing through the lens.

With DSLR and mirrorless camera technology development, camera shutters have improved over time – but their primary function remains. (It’s probably better to say how they go about exposing the sensor to light has improved over time.)

There are two types of shutter that most current generation cameras possess – especially in the mirrorless arena.

DSLRs feature a mechanical shutter as they have a physical device that moves up and down to expose the camera sensor.

But there’s a lot more to it than that. When you look through a DSLR optical viewfinder, you see a true to life view of what the camera lens sees.

The light travels into the lens and bounces off a mirror inside the camera. The reflected light passes into the optical viewfinder so you can see what’s in the frame.

The camera sensor sits behind this mirror/shutter combo – as a result, it blocks the light from the sensor.

When you press the shutter button, the mirror flips out of the way, and the shutter opens up for a fraction of a second – long enough to expose the camera sensor to the light.

When you do this, you’ll notice a moment where the view through the optical viewfinder blacks out.

Mirrorless cameras also have a mechanical shutter that works in much the same way.

The most significant difference between the mirrorless shutter and the DSLR one is that a mirrorless does not have a mirror (hence the name mirrorless). Mirrorless cameras don’t have an optical viewfinder, and as such, they don’t need the light from the lens to bounce via a mirror.

Mirrorless cameras have an electronic viewfinder (or EVF). These have a small digital LCD inside them. What the camera sensor sees is shown on the EVF LCD.

Mirrorless cameras show a ‘live view’ of what the exposure will be like once you press the shutter button – DSLRs don’t have the same EVF live view option.

Let’s check out some of the pros and cons of the mechanical shutter:

Mirrorless digital cameras also feature an electronic shutter that replicates the actions of a mechanical shutter.

Having the choice of switching between electronic and mechanical provides greater flexibility in varying shooting conditions. Some mirrorless cameras automatically switch between the two to meet the changing light.

When you press the shutter button, instead of a physical device moving away from the image sensor, the sensor starts and stops reading the light.

This happens in one of two ways.

The first is known as a global shutter or total shutter – the camera sensor switches completely on and off for the duration as per the shutter speed.

The second is a rolling shutter, which sees the camera sensor switching on and off in a rolling motion down the shutter – row by row.

There are many benefits to using an electronic shutter, but they have a few setbacks, too. Let’s take a look:

Other Types of Camera Shutter

So far, we’ve discovered what a camera shutter is and what it does to create images.

We’ve also learnt the critical difference between mirrorless and DSLR camera technology and the role played by mechanical and electronic shutters.

Electronic shutters are getting a lot of attention from camera developers now as the march to mirrorless cameras picks up pace.

However, several electronic shutter types exist in various makes and models. Let’s take a look at the different types of electronic camera shutter.

As discussed, a rolling shutter is an electronic shutter that doesn’t use a mechanical device to expose the camera sensor.

Instead, the sensor acts as the shutter by switching on and off, row-by-row of the sensor array. The action works from the top of the sensor down to the bottom in a sweeping motion.

As a result, a rolling shutter can achieve fast shutter speeds but result in image distortion when capturing fast-moving objects.

A rolling shutter also supports high FPS rates as the next wave begins at the top before the last wave has finished at the sensor’s bottom.

You should also read our guide: how do you avoid the rolling shutter effect?

Hybrid shutters combine a mechanical and electronic shutter – they operate in unison. The mechanical shutter physically covers the shutter with a curtain and moves out of the way to expose the sensor.

Once it has moved, the sensor uses an electronic rolling shutter to capture the incoming light.

Unlike a rolling shutter where rows of the sensor switch on and off in waves, a global shutter has the entire sensor turn on and off as one.

Almost all electronic shutters are silent – there are no moving parts to make noise or vibration detected in long exposure.

What’s more, most mirrorless cameras have a silent shooting mode where you turn off all electronic beeps, such as those that happen when the focus is acquired or you press the shutter button.

Silent shutter and silent mode are ideal for wildlife photography where you don’t want to spook the animals with camera noise.

How long does a camera shutter last?

There’s an excellent reason why vintage film cameras are still in use today – they last. DSLR manufacturers announce that their mechanical shutters last for a set shutter count. However, they usually last well beyond this. Depending on the camera’s quality, a shutter count can extend to anywhere between 100,000 and 300,000.

Do mirrorless cameras have a shutter life?

So while there’s still a shutter, it has less demand upon it, and as a result, mirrorless cameras often last longer than DSLRs.

Do smartphone cameras have shutters?

Can you replace a camera shutter?

Yes, you can replace a camera shutter and any other part of a camera for a price. If you have a camera that you love, but the mechanical shutter has stopped working, you can have it repaired or replaced by a service centre. However, in some cases, it’s more cost-effective to replace the camera entirely.

Check out our guide on how to check your shutter count.

How do I know if my camera shutter is broken?

If you look into the camera when you’ve removed the lens, you’ll see the image sensor. When you press the shutter button, you’ll see a flutter of movement as the shutter responds. If you don’t see this and cannot take a picture, the shutter may be stuck or no longer functional.

All too often, we take the way things work for granted. As much as I’d like to thank tiny magical unicorns inside the camera for making the pretty photos, there’s a lot more to it.

Camera shutters on DSLR and mirrorless cameras are incredibly complex devices with decades of research and engineering behind them.

The fact that they make a shutter to last 200,000 actions is astounding by today’s standards – especially when you consider the expected life span of a lot of consumer electronics.

A fundamental of learning photography is to understand the math, science and engineering behind these fantastic pieces of equipment. It makes you a better photographer to know the limitation of your gear.

What are your thoughts on the different types of camera shutters? Do you have a preference for electronic versus mechanical? Or are you a die-hard fan of the leaf shutter?