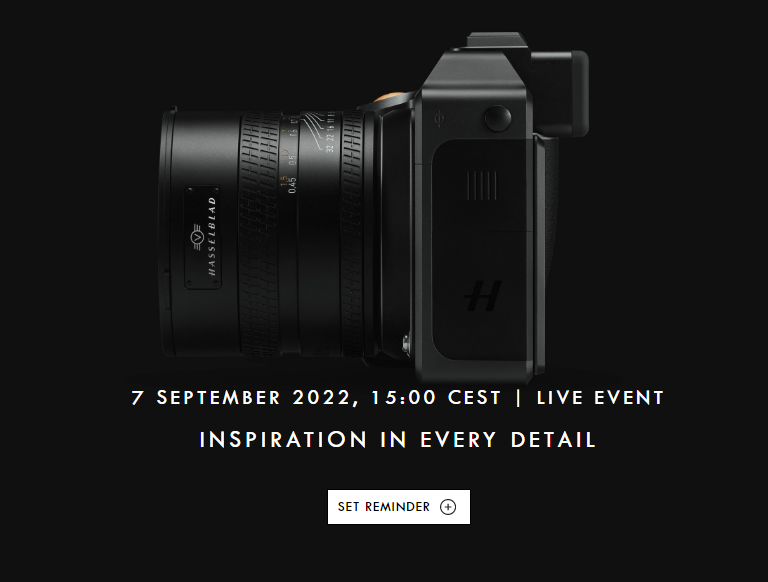 Legendary pro camera maker Hasselblad has released a piece of teaser publicity that’s strongly hinting at an upcoming new camera unveiling. The mysterious event is scheduled for September 7th and though we have no confirmation of details, it seems to be for a new mirrorless camera with form factor characteristics from Hasselblad’s X series.

The piece of promotional material is very simple but effectively put together: The teaser appears on Hasselblad’s social media channels with a link to the company’s website where interested viewers can sign up for a calendar notification. The teaser itself features nothing more than the date and time of the unknown event and a photo of a mirrorless camera against a black background.

With that said, the website Photo Rumors has noted that there’s a circulating rumor of a new camera from this prestigious Swedish company. The rumor is light on substance but has been surprisingly tenacious in circulating for months to date. Part of the speculation around the supposed camera includes a possible 100-megapixel sensor.

Hasselblad’s cameras are nearly legendary in the photo industry though the company doesn’t announce new editions as frequently as some brands. Their most recent previous release was for the 907x in August of 2020, but the camera hinted at in the current publicity teaser shows a different design profile that’s more similar to the brand’s 2019 edition X1D II 50C.

If a new camera does emerge in September, its price tag undoubtedly won’t be low. The X1D released in 2019 cost just under $9000 when it came out though its price has since then dropped to a much more accessible $5,750.

This latter price tag is closer to those of premium cameras released by rival Fujifilm, whose medium-format mirrorless GFX models retail for somewhere between $5000 and $7000. Thus, it’s possible that a new Hasselblad costs somewhere between $7000 and $9000.

Hasselblad isn’t the only famous high-end camera maker rumored to be planning a new release soon. As we reported earlier, Leica has also shown signs of unveiling a new camera of its own, which is supposedly even going to be a film shooting model. In Leica’s case, the reveal is likely to come during an upcoming October brand event in Germany.