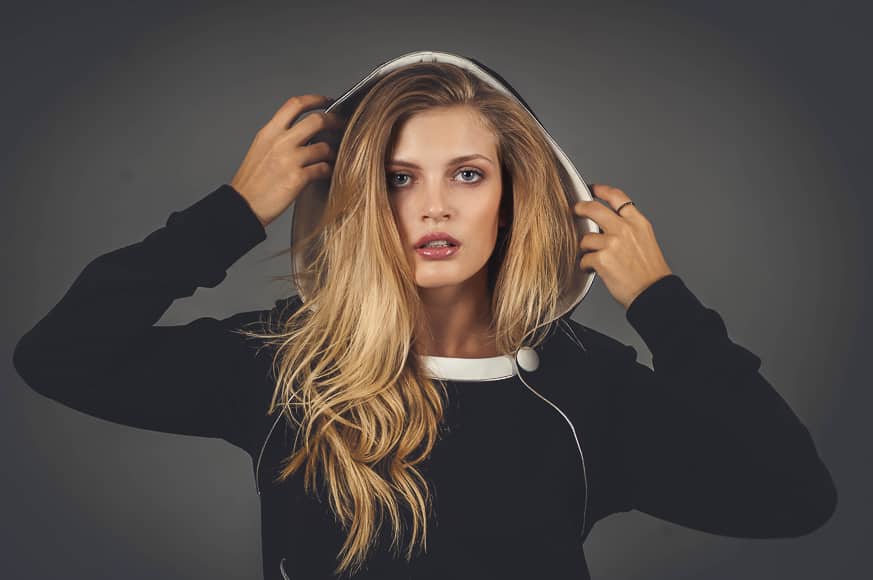 Whether you’re working with a model or a shy client who’s having their first portrait photo shoot, the fundamentals of flattering female poses will always apply.

Your role as photographer is to make the female portrait experience comfortable and enjoyable, while directing your subject into poses that look and feel great.

Here’s a selection of tips and female poses to give you inspiration and confidence while shooting.

Let’s capture some amazing photos that encapsulate the beauty of the female form.

Need help photographing females? Posing and directing your female subjects can be nerve-wracking, even for experienced photographers.

Check out this useful tool for a smart solution >>

1. Never Pose a Woman Square to the Camera 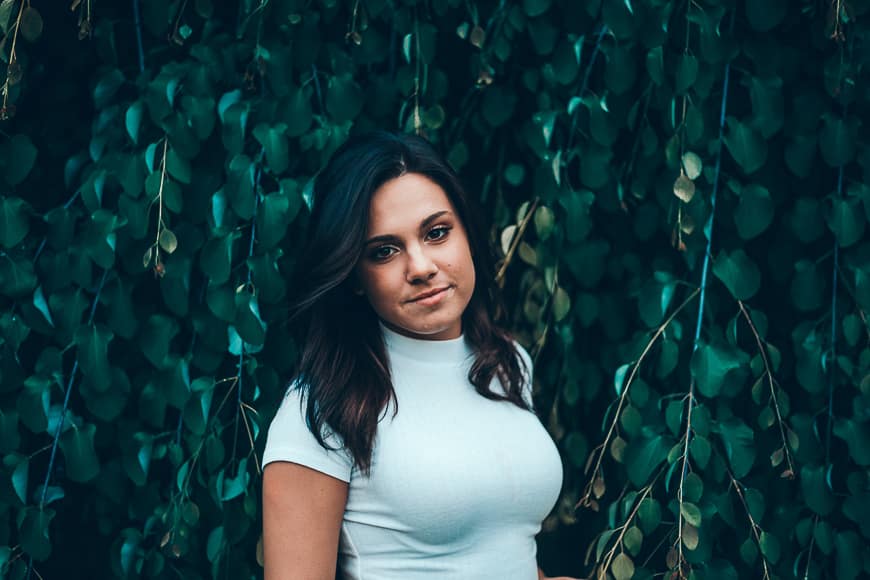 When posing a female model we’re going for a slim, feminine look. Some poses bring this out. Others do the opposite.

It’s not really about the size of the model – it’s more about how they’re positioned. For example, positioning a model with her shoulders square to the camera will make her body look wider.

A better choice is to have her turn her body away from the camera by about two thirds while keeping her face straight towards the camera.

For example, if you’re asking the model to turn their right side away from the camera, have them step back with their right foot. Easy.

If this seems like too much of a turn, scale back by just placing one shoulder closer to the camera. It’s surprising what a huge difference just this small of a change can make.

2. Shoot from Slightly Above

Shooting from slightly above your model will help to define the chin and jawline. The camera should always be at least above her eye level – never below it.

This angle works great for curvier women especially. The body look smaller when the camera is above and a bit of a distance away.

3. Go for a Strong Jaw Line 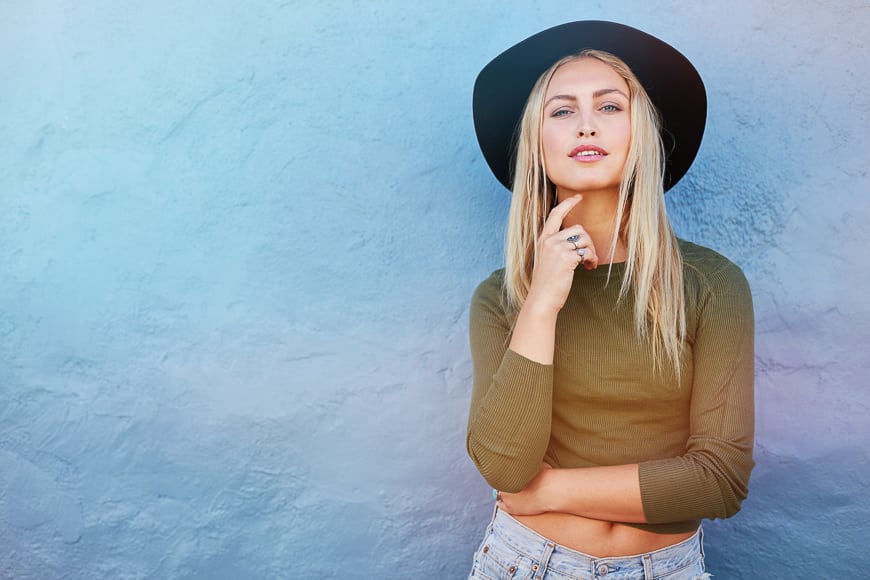 A strong jaw line without a double chins is one of the main features you’re going for in female portraits. Shooting from above eye level is one technique, but there are others that are just as important.

If you’re facing the model straight on, another technique is to ask the model to bring their head forward as if they were a turtle poking its head of its shell. This will usually bring the chin out and down, making for a strong, attractive jaw line.

With female portraits how the mouth appears can make or break a photo. A closed, tight mouth tends to suggest defiance, boredom, or even anger. A mouth slightly open with the lips just apart, however, implies openness, agreement, willingness, or even vulnerability.

Technically speaking, a closed mouth will often cause the jaw line to clench, making the sides of the face seem heavier. A slightly open mouth will help to elongate the jaw line and lend a much more pleasant energy to the portrait.

5. Careful with the Hands

When learning how to pose models, one of the hardest things for a photographer is knowing what to do with the hands. A person’s hand is almost the same size as their face. For that reason, it’s important to avoid having the palms or the backs of the hands in full view near the face.

Instead, place the hands to the side, under the chin, in the hair, or over the shoulder.

It’s also important to not have the hands pressing against anything. Make sure that the fingers are slightly apart, curved, and only just touching the hair or face.

6. Create a Gap Between the Arms and Body 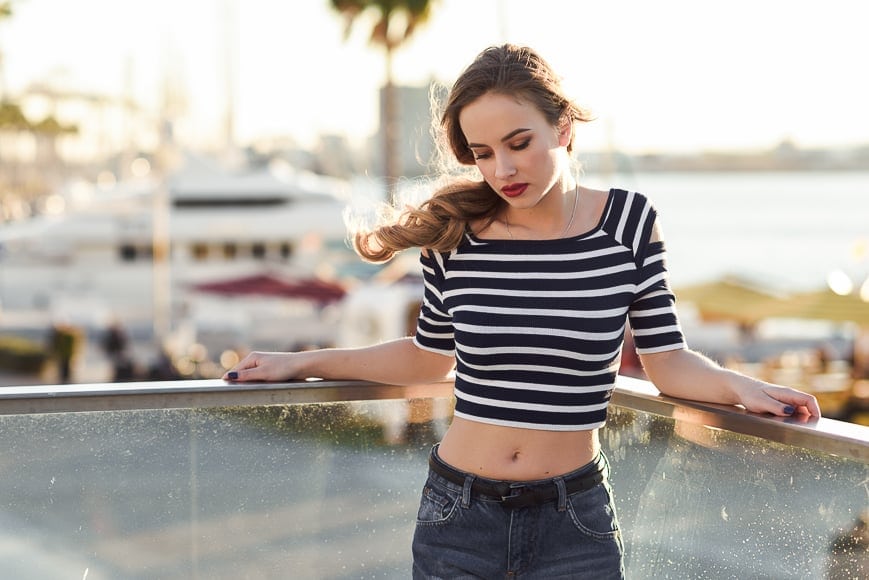 With standing portrait poses, it’s natural for the model to stand with their arms flat against their sides.

Unfortunately, this pose isn’t particularly flattering. Not only does it tend to look awkward, having the arm pressed against the body squishes it out in a way that makes the arms look thicker than they are.

To correct for this, have the model move their arms away from their body in a way that creates visible space between the two. The easiest way is to have them place a hand on their hip or just bend their elbows enough to create a gap. Whichever you choose, just make sure there is a visible gap between each arm and the body.

In female portrait photography curves are of an essence. They’re what make most women feel feminine. Highlighting a female model’s curves also has the added benefit of making the waist look more defined.

In standing poses this can be achieved by having the model put her weight on her back foot. Add in a knee bend away from the camera and boom! You have a glorious curve through the front hip and leg. From there, add in an elbow bend and the curve of the waist will be highlighted.

This is just one way of doing it. The takeaway is, all female poses can benefit from bringing out the curves.

8. Use your Model’s “Favored Side” In today’s age of selfie photography, most models will have discovered that there’s one side that looks better than the other.

Each of these female model poses has a basic version and a number of variations. Don’t forget to experiment with where to place the hands and hair. 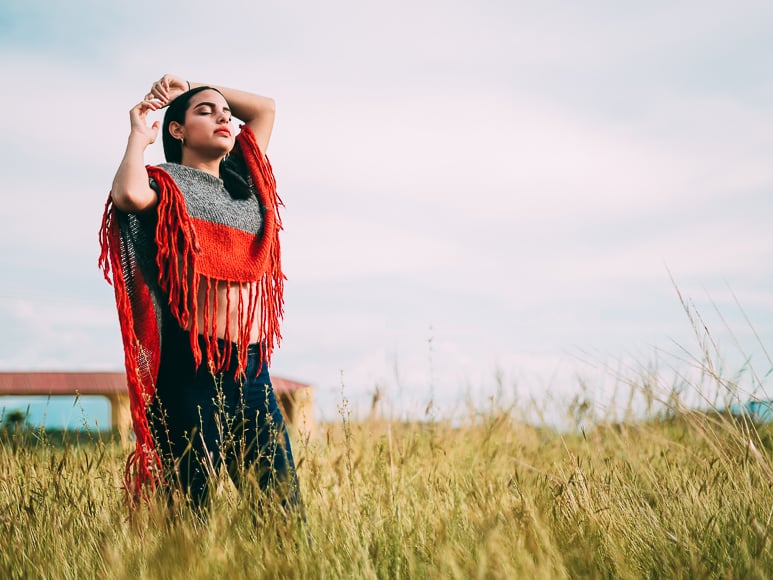 The 45-degree angle pose is one of the more natural photography poses for female models and a great place to start.

Turning the body half-sideways will make the model look taller and slimmer while highlighting her posture.

As mentioned above, ask her to bend the knee closest to you and place the weight on the rear leg. 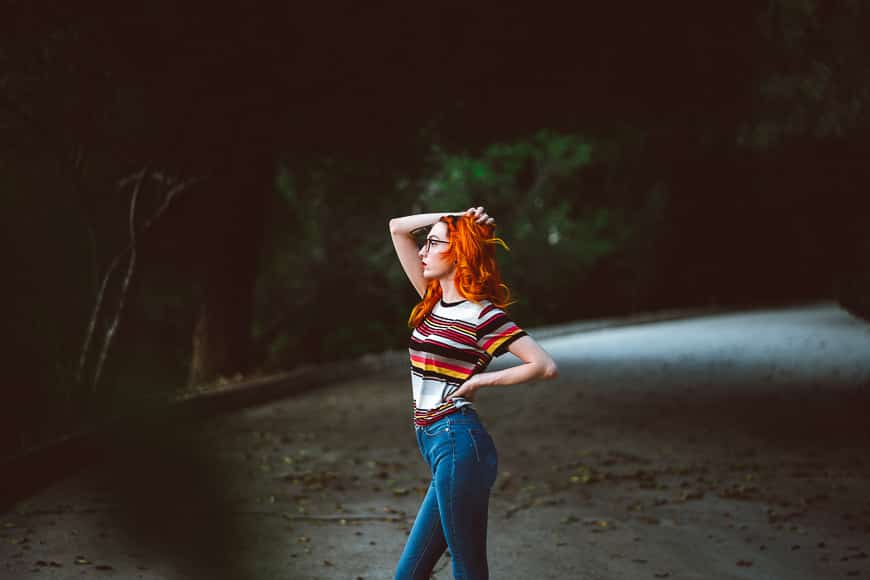 The three-quarter pose is a standard female model pose that’s great to start out with. In this pose, the model turns her body just enough so that only three-fourths of her body is visible.

Start with one foot behind the other. Then have her stand with her hips facing away from the camera, but with her shoulders facing the camera. Tuck the back knee behind the front knee.

From there, the hands can move to the waist with the shoulders rolled slightly forward. Make sure to place the hands in a way that the elbows are bent, perhaps by allowing them to slide inward along the torso.

This will both create the needed gap between arms and body and make the waist look smaller. 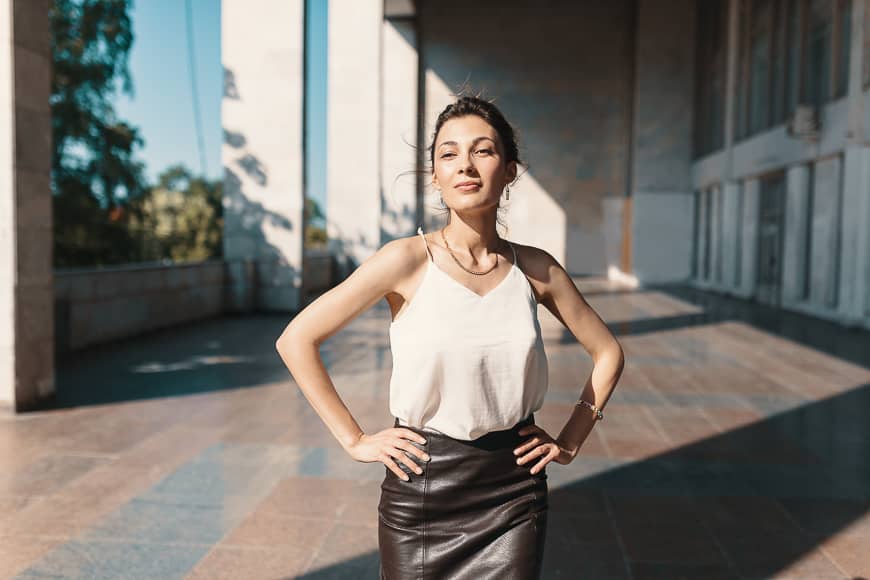 It makes the waist seem smaller because the gaps created by the arms creates a slimming effect. It’s also a pose that radiates female power and confidence.

Like the other poses, it’s important to not have the body be totally square to the camera. If you don’t want to pose your model semi-sideways, move one shoulder forward, making sure the weight is on the back foot.

Sometimes pushing the shoulders a bit forward is also helpful, as it will accentuate the collar bones. 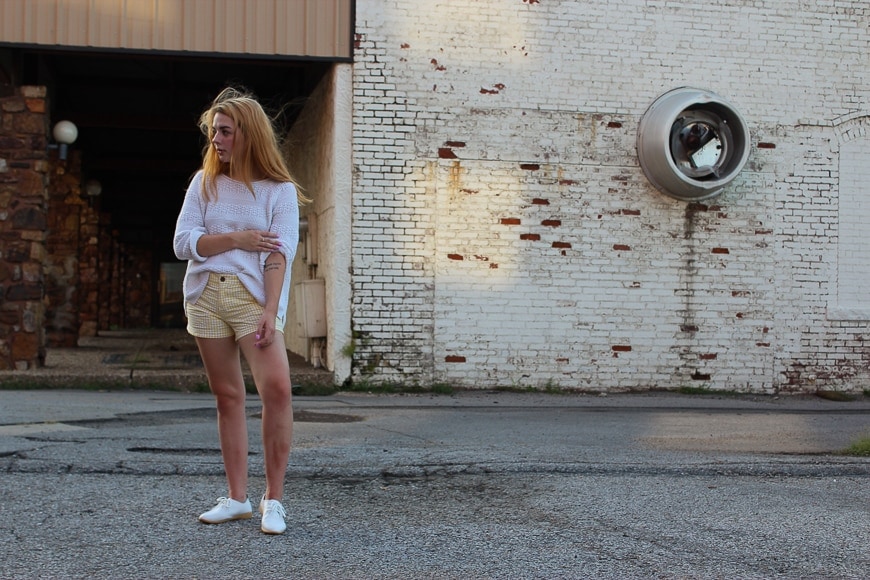 All of the female poses above can be done as head-and-shoulders or half-length shots, but half-body shots are often easier. If you know you definitely want a full-body portrait, this pose will do wonders.

Have your model bring the leg closest to the camera forward, turning that foot slightly outwards. Keep the knee bent. From there, have her roll her hip up slightly, while keeping her weight on her back leg.

Place the hands to the side or to the front of the model, again making sure that the elbows are bent and that there’s space between the arms and the body. Seated modeling poses come in a variety of flavors, even one so simple as leaning forward. It all depends on what emotion you want to evoke in the viewer.

Innocent or excited: Have the subject sit forward on the edge of the chair with knees and ankles together. From there, ask them to bend their torso over their thighs. Keep their face and shoulders high, facing the camera.

Tough and powerful: Have the subject sit with their knees apart and place their elbows on their knees. Their chest should be up and their face looking straight into the camera.

Play with the expression on the face until you get one that radiates power.

Desolate and forlorn or vulnerable: Sit with the knees together and the ankles apart. Bend the torso forward. Then have them hug their legs. Leaning back while seated tends to offer an element of power or playfulness to a photo, depending on the posing. Play with the different moods that can be captured here by leaning the head back and experimenting with the positioning of the arms and legs. 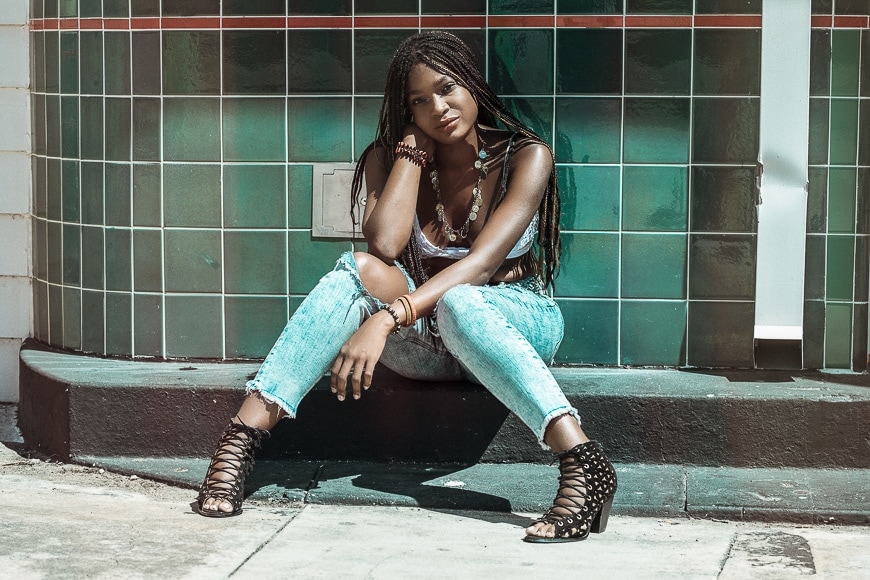 if you’re looking to add a bit more creativity to your seated poses, try the tips below:

Bonus Tip 1: Practice the Poses Yourself

This might seem like a no-brainer, but it really helps to practice the poses yourself before trying to guide someone else through them.

It may seem a bit strange, especially if you’re a guy, but knowing exactly what it takes to get into each pose will do wonders for your ability to explain exactly the look you’re going for.

If you’ve ever been in front of the camera, you know how it can bring out a person’s insecurities. That’s why it’s important to take the time to make a connection with your models.

As the photographer, they need to be able to trust you to highlight the parts of them that shine and downplay the things they don’t find flattering about themselves.

Simply reference the Posing Card, direct your model, then wait for the perfect moment.

Posing females to create flattering images takes years to master, not to mention plenty of confidence as a photographer.

Using a tool such as Solo Cards can really help with the process – simply print them out, load them on to your phone, or even put them on the back of your camera screen, then reference them while taking photos of your subject.

Solo Cards include 111 natural poses for women and men. Get them here >>

How do female models pose?

There are several tricks that models use to look their best in front of the camera, including the distribution of weight on their legs, positioning of their arms, and even where they place their fingers.

How do models look slimmer?

Tilting your hips back, standing at an angle, bending your limbs and leaning away from the camera are all tricks models use to make them look slimmer. Mastering female model poses will take time and practice, so don’t expect to get them all down in a day.

Not only is every model different in how they respond to direction, but most women don’t come in knowing how to pose as a model.

That means they’ll be relying on your guidance.